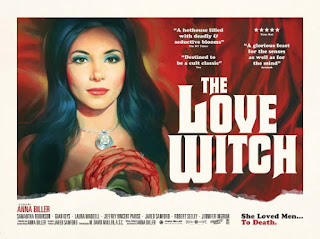 A true one-off, this flick, and very difficult to quantify using any set of critical perameters. As an example of auteur theory, ‘The Love Witch’ is pretty much the ne plus ultra. The phrase a “film by” has seldom been so completely laid claim to as by Anna Biller who was responsible for its script, score, production, direction, set decoration, art direction, production design and costume design. IMDb doesn’t drill down into such detail, but I’d be willing to put money on her doing the catering, making the tea and designing the poster.

If Biller is the one-woman force of nature that got the film off the ground, Samantha Robinson as the eponymous sorceress makes it fly.

Robinson plays Elaine, a stylish, sexy but somehow slightly strange woman who arrives in a burst of colour and enigma in a small town and proceeds to turn the heads of most of its menfolk. I say “slightly strange” because everything in ‘The Love Witch’ is off-kilter: the camerawork has the too-bright intensity and in-your-face angles of classic gialli, the colours are unnatural, the performances are deliberately stilted, the production design locates the film in some fictive netherworld between 1963 and yesterday, and the music is as if Burt Bacharach suddenly became really interested in Anton LaVey.

Does the above sound like I’m handing out a half-and-half serving of compliment and bitchiness? All I can say is that ‘The Love Witch’ offers, simultaneously, the undiluted artistic expression of its creator and a viewing experience almost guaranteed to have the audience wondering just who the fuck Biller made it for. Its giallo stylisations overlay the first twenty minutes or so only, and moreover its narrative choices and mise en scene are utterly removed from the genre. Its depiction of witchery seems more like a conflation of mental illness and paganism. Its feminist trappings are at best confused. A weird second-half scene, extended to such a length that it must have conceived as meaningful, has a group of wandering minstrels enact a Shakespeare-cum-Wicker-Man-cum-support-group play involving a fake marriage. The whole thing is so po-faced and earnest and abjectly pointless that the only polite response is to gawp at the screen and not snigger.

Granted, most of the film is pitched at the level of pastiche rather than outright spoof or ironic commentary – an artistic decision which negates an entire swathe of conventional critical tropes – but the play scene exists in an entirely different register from anything else. It marks the point at which complete artistic control stumbles over the cracked paving stone of self-indulgence and falls face-first into the sinkhole of what-the-fuckery.

‘The Love Witch’ is a striking and original film that is engaging and entertaining and thought-provoking for approximately 60% of its needlessly extended two hour running time, and you can fuck me with a wagstick from here to the next equinox if the rest of it even remotely belongs on a length of celluloid that could otherwise have been used for road safety commercials.
Posted by Neil Fulwood at 7:19 PM