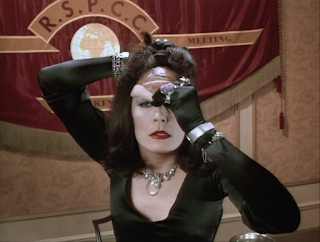 I’d like to have been at the first performance of the Ninth Symphony, where a member of the orchestra had to turn the by-then stone deaf Beethoven round so that he could see the audience rapturously applauding. I’d like to have been at Knebworth in 1979 when Led Zeppelin basically demolished the entire punk movement in one epic show and the crowd adulated. And I’d like to have been in the production meeting at Jim Henson’s offices when someone floated the idea that the absolute best person to direct a kid’s film based on a Roald Dahl novel was the dude who made ‘Performance’, ‘Walkabout’, ‘The Man Who Fell to Earth’ and ‘Eureka’.

It goes without saying that Nicolas Roeg was the absolute best person to helm a Roald Dahl adaptation – no other filmmaker has tapped into the grotesquery of Dahl’s work with such gleefully scatological intuition – but nonetheless I can only imagine it was akin to a studio meeting today wherein an E.L. Stine property is being discussed and a lone voice of insanity lobbies really hard for Darren Aronofsky. The day after ‘mother!’ opened.

Many Dahl adaptations fail because they shy away from how fundamentally fucked up his stories are, or – pace Tim Burton’s stab at ‘Charlie and the Chocolate Factory’ – work too hard at trying to replicate the weirdness. Then we have the likes of Spielberg’s ‘The BFG’, which I walked out of after 40 minutes because (a) he just didn’t freakin’ get it, and (b) nobody involved had any Christing idea which decade they were setting it in. It was like watching an episode of ‘Electric Dreams’ where the main character gradually comes to realise he’s in an immediately recognisable but ultimately improbable simulation of England.

‘The Witches’ opens in Norway, its title sequence pulsating to Stanley Myers’ magnificently OTT score as Roeg’s camera whizzes over a snowy mountainscape. It’s like a mash-up of the opening credits scenes of ‘Where Eagles Dare’ and ‘The Shining’ and it signals from the get-go that this isn’t going to be a typical kids’ movie. The first act has young Luke Evisham (Jaden Fisher) learning about witches from his eccentric grandmother Helga (Mia Zetterling, having the time of her life) while on a vacation to the old homeland with his parents. Fate intercedes and when they buy it in an offscreen car accident (this is a Roald Dahl story, and he never condescended to his readers about the essential unfairness of life), Helga relocates to England to look after him. A health scare sees Helga diagnosed with diabetes (yup, Roald D again: guy ain’t spoon-feeding ya) and advised to take a restorative break at a seaside hotel. 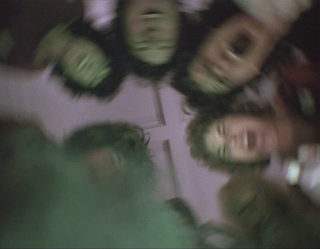 If Roeg’s vision of Norway is generally respectful (albeit a tad “chocolate box”), his take on England is pure satire, from the bicycle as the preferred means of transport to shiny red postboxes in picturesque village lanes by way of cheeky young lads who could have stepped living and breathing from the pages of P.G. Wodehouse and insufferably pompous hoteliers whose establishments boast drab rooms and sticky buns. Speaking of the hospitality trade, Rowan Atkinson’s Mr Stringer – his last great performance before he inexplicably embraced the moronism of ‘Mr Bean’, ‘Johnny English’ and all the other identikit rubber-faced pratfall roles he’s favoured for the last two decades – deliberately evokes one Basil Fawlty.

Into this parochial little England comes the Grand High Witch (a never-better Anjelica Huston). Under the guise of a fund-raiser for the Royal Society for the Prevention of Cruelty to Children, the GHW chairs a council of witches with the sole item on the agenda being how they can most effectively do the maximum amount of harm to children. Hint: it involves turning them into mice.

What follows – as Helga recognises the GHW as an antagonist of old, and Luke suffers the side-effects of a run-in with the witches – is as close as you’re likely to get to a live action treatise on the aesthetics and logistics of a cartoon on either side of ‘Who Framed Roger Rabbit’, and even ‘WFRR’ had to rely on a certain amount of traditional animation. 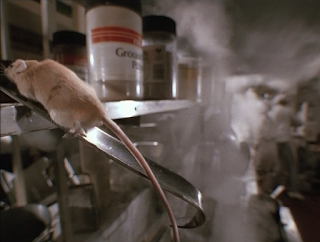 At its most manic and delirious, ‘The Witches’ is like a Tex Avery cartoon come to life with all of the not-for-the-kiddies sensibilities that description suggests. Its most astounding set piece is the aforementioned witches’ council, a sequence so extended that it virtually occupies the entire middle third of the film. In it, Huston’s GHW becomes so transported in her description of how the childrens’ fates will be effected that her vocal delivery and body language become almost sexual. This, twinned with the grotesque facial appearance of her true self (none of the witches can wait to shuck off their human disguises once they’re behind closed doors), makes for decidedly uncomfortable viewing.

Or take the scene where head chef Andre (Jim Carter) encounters an anthropomorphized mouse which tries to elude his anti-rodent attentions by running up his trousers. The ensuing comedy of embarrassments is more Brian Rix farce than kids’ film. Or how about the diversion the GHW creates at one point by sending a pram hurtling towards a cliff edge? In the office last week, during a conversation about favourite Halloween films, I intoned (in appropriate sing-song fashion) the line “real witches work only with magic” – several grown adults shuddered and told me not to.

Yes, Roeg was exactly the right person to direct ‘The Witches’. It’s a weirdly unconventional piece of filmmaking, in ways that it would take me an essay four or five times the length of this one to fully explicate; it’s not interested in traditional narrative functionality or even the requirement of having a hero; and it’s utterly committed to the macabre and the grotesque. It’s the ideal thirteenth in this year’s thirteen for Halloween.
Posted by Neil Fulwood at 7:35 PM