13 FOR HALLOWEEN #8: The Last Witch Hunter 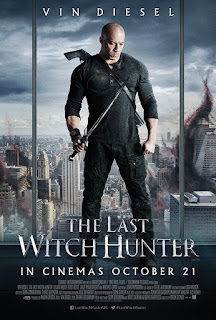 Using the word “last” in your film title is both a signifier of dramatic content (how can what’s onscreen not be some kind of götterdämmerung?) and a self-styled elevation to some pretty impressive company. ‘The Last Picture Show’. ‘The Last Tycoon’. ‘The Last of the Mohicans’. ‘The Last Waltz’. ‘The Last Emperor’. ‘The Last Seduction’. ‘The Last Detail’*.

And that’s why it’s so galling when lesser films go the “last” route. ‘X-Men: The Last Stand’. ‘The Last Castle’. ‘The Last Airbender’ (a film that sounds like it’s about the fin de siecle of flatulence). ‘The Last Boy Scout’. It’s as if you’d announced your piece of cinematic product as ‘The Last Motherfucking Badass Motherfucker’ and what unspooled through the projector was basically every single episode of ‘Ivor the Engine’ edited to feature length.

So it is just me then.

‘The Last Witch Hunter’ (hereinafter ‘TLWH’) kicks off with a prologue set at some indeterminate point in history. I’d like to be charitable and describe it as the middle ages, but I rather think the production designer had watched too much ‘Game of Thrones’ (maybe he had some say in Leslie’s casting?). Some bearded dudes with heavy duty swords and axes venture through a wintry landscape and come across the lair of a witch queen (Julie Engelbrecht). Their numbers are decimated as the witch queen’s legions unleash themselves. Eventually, though it’s a smackdown between the witch queen and Kaulder (Diesel). Kaulder wields a sword of fire (yeah, that’s pretty much your first quality control plummet right there). He runs the witch through; the witch mortally wounds him.

But Kaulder doesn’t die. The witch queen curses him with immortal life. Cut to: the early twentieth century and Kaulder is working for a shadowy ecumenical organisation called the Axe and Cross (which every single cast member manages to enunciate as a single word – Axsunkross – making it sound like the world’s least convincing German death metal band), wherein he’s aided by a series of individuals known as Dolans. Each Dolan is a sort of composite butler, advisor and biographer. Kind of like Beauchamp from ‘Unforgiven’ crossed with Alfred the butler from the Batman films. The Alfred comparison is strengthened by the fact that Kaulder’s current Dolan (the 36th shadowy priest to have held the position, and on the verge of retirement) is played by Michael Caine. Not the Michael Caine of Christopher Nolan’s Batman films or ‘The Prestige’, unfortunately – you know, the Michael Caine who’s interested in the role and committed to the performance – but the Michael Caine of, say, ‘Jaws: The Revenge’ or ‘The Fourth Protocol’: the Michael Caine who’s basically sleepwalking through each day on set while he tops up his retirement fund.

Anyway, Caine’s 36th Dolan doesn’t get much chance to enjoy his retirement. His internment and Elijah Wood’s swearing in as Dolan numero 37 occur on the same day. 37 tries to ingratiate himself with Kaulder, to limited effect. Kaulder isn’t convinced that 36’s death was natural: “I’ve seen men get old, retire and die – just not on the same day”.

Unfolding against an uneasy truce between elementals and the church – facilitated by a witches’ council – what follows, never mind how fuck-awful in conception and execution, is a pacy and entertaining enough romp through a bit of hasty world-building (or rather underworld-building, since the film is set in an immediately recognisable Big Apple where the witchy and warlocky business is done in basement bars, caverns and abandoned churches). For its first hour or so, it’s pretty much a procedural as eternal loner Kaulder, shoving 37 into the background, cuts a swathe through NYC’s coven community in search of the big bad. En route, he encounters bar owner, sorceress and dreamwalker Chloe (Leslie, who I’d love to see revisit the character in a spin-off): witch and witch-hunter form an alliance.

For its last act, ‘TLWH’ goes into full-on CGI mode as Kaulder’s investigation leads back to his erstwhile encounter with the witch queen and the nature of his immortality is threatened. These aren’t spoilers by the way, the narrative is just very predictable. The CGI is questionable. The stakes, however, are given a little weight. There’s a moment where it looks like Kaulder is eff ewe kay tee fukt, and that at least is something interesting in a Vin Diesel film.

Elsewhere, however, things are strictly boilerplate. The performances are as you’d expect. Leslie does her best, Wood wears the perpetually sad expression of one who once had a proper film career and it wasn’t so long ago either, Caine we have already spoken of, and Diesel we probably shouldn’t speak of. When an actor takes his stage name** from the acronym for vehicle identification number and a combustible fuel, it tells you all you need to know, non? Put it this way: if you saw a poster for an action movie starring Chassis Petrol or Engineblock Benzin, you wouldn’t expect a Paul Schofield or Christopher Plummer level of thespian excellence, would you?

And that’s exactly what you get in ‘TLWH’: a Vin Diesel performance attuned to the expected aesthetic of a Vin Diesel film. If only it had been Rose Leslie vs The Witch Queen From Hell.


*A film ‘The Last Witch Hunter’ should have emulated, in my humble opinion. Vin Diesel walking into a shitty dive, slamming a cross down on the bar and declaring “I am the motherfucking witch patrol, motherfucker” would have been instantly more iconic than anything on offer in the actual film.