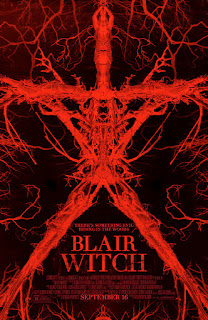 In 1999, Daniel Myrick and Eduardo Sánchez’s ‘The Blair Witch Project’ came out of nowhere, terrified a generation, and opened the doors for far more “found footage” horror movies than were strictly necessary. It was a cultural phenomenon and tapped into … actually, I don’t know what the fuck it tapped into. I didn’t rate it at all. In fact, ‘The Blair Witch Project’ remains high in the top ten of Most Boring Movies I’ve Sat Through On The Big Screen.

I never even bothered with ‘Blair Witch 2: Book of Cash-In’ and from what I’ve heard of it, I was wise not to. Wish I could say the same of Adam Wingard’s ‘Blair Witch’, its oddly truncated title – suggesting a reboot while it’s actually a “15 years later…” sequel to the original – the least of its problems.

Wingard is one of those directors – like Ti West – who’s carved out a prolific career for a relatively young filmmaker, who turns out confident work on micro-budgets, who often attracts “future of the genre” epithets, and yet never seems to achieve that move to the mainstream the way, for instance, Jordan Peele has with ‘Get Out’. Nor is Wingard quite as smart a director as West or Peele, though parts of ‘You’re Next’ hinted at greater things.

‘Blair Witch’, however, doesn’t. In fact, all ‘Blair Witch’ hints at is the tired cult of remakes that is slowly draining the life from contemporary horror films. Sure, the film is a delayed sequel in which Heather-from-the first-film’s brother (who, given the timeframe, must have been in the neo-natal clinic when she disappeared) sees some footage online and leads a mismatched group of wannabe documentary filmmakers into the woods etc etc, and sure, they’ve got better kit than Heather & co., including a drone, but ‘Blair Witch’ is an almost beat-by-beat remake. It’s certainly a yell-by-yell remake in terms of how bratty and argumentative the principles are. And a shake-by-shake remake as far as the camerawork is concerned.

Where Wingard does pay lip service to originality, he achieves little. There are more principles this time round, including two locals, which should have shaken up the group’s dynamic, but instead just results in more people yelling at each other. There’s a drone to give us aerial shots of how vast the forest is when the endless shots of the group tramping through yet more swathes of woodland on ground entirely establishes the sense of scale anyway. There’s more business at the scary old house at the end, but whereas the original generated a sense of the unexplained by ending at the exact point at which it did, ‘Blair Witch’ plods around the scary old house for fifteen minutes and starts grabbing at anything it can just to fill up the time – tunnels, crawlspaces, characters who had earlier disappeared returning as servants of the witch, a huge God-light that illuminates the scary old house for no other reason, presumably, than someone on the production managed to get their hands on a Kleig light and figured they may as well use it.

Worse is still to come: ‘Blair Witch’ lumbers towards a conclusion straight out of the M. Night Shyamalan twist-ending-for-its-own-sake playbook. A twist that relies on the kind of temporal monkey-business – day suddenly becoming endless night, one character ageing visibly while the others don’t, and a summary of the bootstrap paradox for the YouTube generation – that you can only really get away with if you have a Tardis and a Gallifreyan birth certificate.

‘Blair Witch’ is a wretched piece of work whose 89-minute running time feels like you’ve sat through ‘Satantango’ with commercial breaks every quarter of an hour.
Posted by Neil Fulwood at 11:25 PM