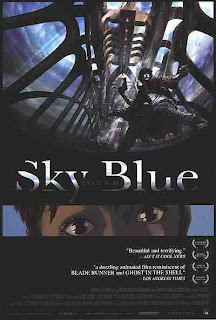 Ordinarily, I’d have approached this with great anticipation. However …

‘Sky Blue’ was released to its domestic Korean market as ‘Wonderful Days’ – a title which captures the small degree of hope suggested by the transcendental final scenes of a hitherto very grim movie – and I have heard that the differences between the Korean original (properly subtitled) and the dubbed version prepared by director Sunmin Park for the English language market are so pronounced that they almost seem like different movies.

Certainly, the dubbed English version (released by Tartan Video and erroneously billed on the DVD cover as Japanese language with English subtitles) is stricken with emotionless vocal delivery, a sound mix that often swamps the dialogue under an intrusive score and heavily amplified sound effects, and translations that are wholesale cliché (“This time we’ll be ready for them”; “And so it begins”). 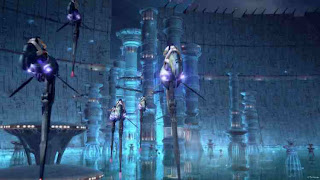 Moreover – and I don’t know if this is a failing of the original screenplay no matter how dubious the translation, or if the English language version is truncated (it clocks in at a brief 82 minutes) – entire scenes play out as if written longer but only parts of them were shot. Whether there’s a name for this technique, I’m not sure, but I’ve occasionally seen it used to great effect: the director plunges the audience into the middle of a scene that seems to have been underway for some while already – indeed that seems to be coming to a head – and lets the immediacy and intensity of this sudden immersion into unfolding events provide the internal dynamic, but at the cost of exposition, dramatic build-up/tension and establishment of characters and interrelationships. It’s the kind of thing that can be done effectively just a couple of times in a movie and only once character, location and narrative have been delineated. In ‘Sky Blue’, every freakin’ scene for the first 40 minutes plays out this way.

Typing the above paragraph, I’m already wondering if I’m just nit-picking. Surely the look of the film is the raison d’etre of anime. Surely anime without movement, without an imaginative visual scope, is redundant. Right?

Hmmm, I’m not sure. Miyazaki, as riotous and unfettered as his imagination is, often achieves the truest and most heartfelt cinematic poetry from the tiniest details, the quietest moments. As ‘My Neighbour Totoro’ or Yoshifumi Kondo’s ‘Whisper of the Heart’ prove, you can make a slow-moving, character-based anime and have it succeed beautifully.

But of course, those films tell different stories. ‘Sky Blue’ is more in the vein of ‘Akira’ or Shinji Aramaki’s ‘Appleseed’: a dystopian vision of the future married to an action-thriller narrative punctuated with the kind of pyrotechnics that would push the cost so high if done as live action that it would make your average James Cameron budget look like chump change. And thus the aesthetic: it’s about the bike chases, it’s about the hardware, it’s about the shoot-outs, it’s about the explosions, it's about the effects. 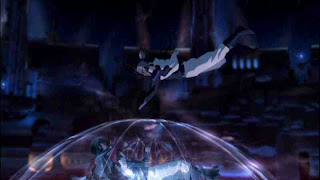 So: on those terms, ‘Sky Blue’ delivers, but no more or less than any other steampunk, cyberpunk, shit-out-of-luck-punk action-fest. And again this is due to deficiencies of exposition and characterization. The basic plot is fairly simple (which is just as well since narrative coherence is paid something that comes a couple of notches under lip-service and only just scrapes in above short shrift): following an ecological disaster, an elite citizenry guarded by a trigger-happy private army hole up in an enclosed city called Ecoban and happily exploit an underclass called the Diggers who mine the wasteland outside the city to fuel its energy supply. The Diggers get pissed off at the conditions they’re forced to endure, particularly when the sadistic Commander Cade lets a bunch of them die in an industrial accident rather than risk his men making a rescue attempt, and decide to rebel. However, with characters sketchily established at best and no weight given to what’s at stake to either side, drama and tension dissipate. A divided loyalties conflict is shoehorned in towards the end, but again with only the shallowest development.

Fortunately, the balls-to-the-wall action finale is realised excitingly enough to succeed on its own terms (although a three-way stand-off at the crucial moment is milked so thoroughly you’d think Max Clifford was doing the publicity), and there is a surprising poignance to the very last scenes that lingers in the mind even as the preceding 80 minutes are swiftly forgotten.

I had no idea about this one. I only look at anime films when I know they are going to be quality cause Ive read up on them, or because somebody recommends them.

But I always clarify when it comes to anime: "is it worth watching? Is it good animation? Is it worth a damn?" because theres a lot of bad animation out there, and if its not good art, if its not quality then I wont watch it.

This looks like it worth a damn, even if its just because its flashy and filled with action and effects, thanks for that review Neil!

Approached as "is it good animation", the answer is most definitely yes. In fact, I'd go as far as saying 'Sky Blue' is worth the asking price for the last ten minutes alone.

Thanks to your review, Ill be checking this one out soon Neil.