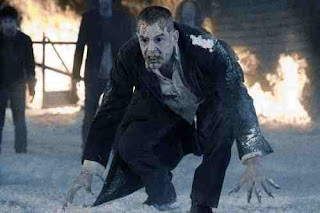 On paper, David Slade’s Alaska-set vampire opus has the elements of golden age John Carpenter: a small community beset by supernatural forces (a la ‘The Fog’); a wintery, isolated setting (a la ‘The Thing’); a small group of protagonists pinned down and outnumbered (a la ‘Assault on Precinct 13’). When ’30 Days of Night’ was screened on Film Four last night, I was rubbing my hands in glee at the prospect of an old-school horror movie with the suspense factor ramped up to the max.

And to be fair, the first half hour works well. Slade demonstrates an admirable economy in setting up the locale and introducing his characters: we’ve got Sheriff Eben Olesen (Josh Hartnett), his estranged wife Stella (the excellent Melissa George), his brother Jake (Mark Rendall), truculent loner Beau Brower (Mark Boone Jnr) and a handful of other townsfolk. A stranger shows up, massacres the huskies, sabotages the helicopter, fucks up phone and internet connectivity and essentially cuts the town off from the outset world. 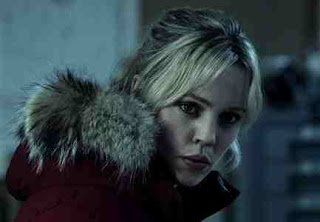 All this on the last day of sunlight, when the residents are battening down the hatches for 30 days of – … well, the clue’s in the title. Eben arrests the stranger, but it turns out he’s only the vanguard. A bunch of vampires, lead by the ruthless Marlow (Danny Huston), hit town as soon as the darkness descends. Most of the populace are massacred (and drained of the old plasma) in short order, leaving a – yup! – small group of mismatched survivors under the increasingly strained leadership of Eben to hole up and try to stay alive.

The remainder of the film jumps from day seven to day eighteen to day twenty-seven. Some of the incident in these sequences seems to span two or three days. By my reckoning (although I must confess I gave the film less and less of my attention the longer it limped on), the vampires get their fill of virtually all the townspeople on the first couple of nights, then there are gaps of a week or so before they pick off one or two of the survivors. Which beggars the question: why stick around so long when the pickings are so slim? Moreoever – SPOILER ALERT – when the vampires decide to burn the place to the ground, both to drive out the remaining survivors and to cover their tracks, they do so on the last day of full dark. Why not do so earlier? Surely they’ve got a fair bit of travelling to do before the sun comes up. They did their main feeding the first two nights, why not make a sustained push to drive out the survivors, finish them off, burn the town and get the fuck out of Do— … er, Alaska by the end of the first week? Who knows, maybe there’s another small town cloaked in darkness for a month and they could stop off for desserts before heading back to wherever they came from? (The vampires speak something that sounds like a combination of Serbian, Vulcan and elvish, their horribly portentous dialogue rendered in subtitles.) END SPOILER. 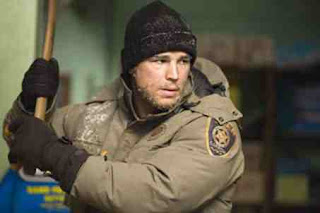 ‘30 Days of Night’ has a higher ratio of characters doing stupid fucking things than any horror movie I’ve ever seen. If the vampires don’t seem like the sharpest tools in the box, well they’re practically MENSA material compared to the people. The day seven incident where some old timer decides he wants to go for a walk – despite the fact that there’s a blizzard outside as well as a bunch of hungry fucking vampires – necessitating his son to race out into the street after him yelling “Daaaaaaaaaad!” at the top of his voice until the neck-biters descend on him, had me face-palming in disbelief. Later, Eben and his merry band up sticks from the attic they’ve holed up in and make a dash for the general store. You know, a place that’s full of food, drink, provisions, supplies. Cut to day eighteen. Apparently, there’s been no vampire activity for several days. Judging from how well stocked the shelves are, our heroes still seem to have plenty of victuals on hand. They’re warm, they’re safe, they’ve got twelve days left till the sun comes up and the bloodsuckers vamoose. So what does Eben decide? “We can’t stay here. We have to move.” No word of explanation, no murmur of protest. Seriously, not one of these goobers raises a hand and says, “Er, excuse me, pretty boy sheriff dude. One question: fucking why?” No, they just get behind numbnuts with the badge and gun and blithely risk life and limb as they make a pointless dash to another location.
I could go on. I could talk about the massive discrepancy in how long it takes a bitten human to turn. (It seems to be anywhere between seconds and entire freakin’ days.) I could bemoan the relentless seriousness of it all and the lack of emotional engagement with most of the characters (only Stella comes across as remotely empathetic and that’s mainly due to Melissa George’s performance). I could point out the misogyny: vampires can apparently feed off a male victim quickly and efficiently; to a man who’s just tried to kill them, they can administer the coup de grace swiftly; but when they’ve got a woman at their mercy, they slap her around for a while before breaking out the fangs. What the fuck, nosferatu dudes, isn’t it enough just to kill your victims? 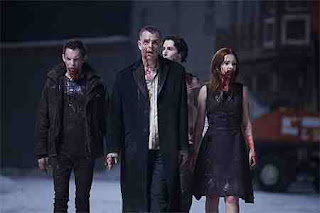 I could go on, but I’ve already demolished my remit of sticking to short 500 word posts during this bank holiday weekend splurge of reviewing. Let’s leave it at this: ’30 Days of Night’ had the potential to be great; unfortunately, it just grates.
Posted by Neil Fulwood at 12:38 PM

Oh man you're right. I always kind of let this film slide with a B- thanks to the fact that Danny Huston and Ben Forester bring the creepy (And I do think every moment their on screen works pretty well).

But that's a plot hole you can drive a truck through that you pointed out.

Good call on Danny Huston and Ben Forester. If there had been more focus on the vampires, more idea of their past, their hierarchy (why for instance do they stand back and let Hartnett fight Huston mano-a-mano when they've assaulted the rest of the townfolk as a group?), where they came from, it might have lifted the film out of the doldrums a bit.

All I know is I developed a major cinematic crush on Melissa George after this film! Wow, she was quite good in this film - not hard against someone wooden like Josh Hartnett but still...

I'm with you there, J.D. I've been a fan of Ms George for quite a while (her, ah, revealing role in 'Dark City' didn't do any harm!). I think she's one of those rare actors who never do anything showy or grandstanding or awards-friendly, but simply gets on with giving dependable, unpretentious and sometimes quite gritty performances.