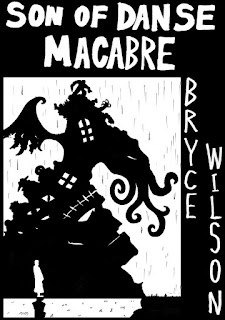 Bryce Wilson’s ‘Son of Danse Macabre’ was one of the most interesting blogging projects of the last couple of years. Especially for fans of the horror genre.

Taking as his Bible and starting point Stephen King’s seminal non-fiction overview of horror ‘Danse Macabre’ – and attuned to the fact that the book, originally published in 1981, concludes its consideration of all things dark and scary at the dawn of that decade – Bryce’s remit for ‘Son of Danse Macabre’ was to consider the American horror movie post-‘Danse Macabre’.

The title may have been an homage; the content emerged as anything but mere copyism. Bryce originally blogged ‘Son of Danse Macabre’ as a book-in-progress, a brave and confident approach for any writer as one’s first draft is essentially being launched into the public realm chapter by chapter. Also a daunting commitment to a writing discipline, particularly since real life has a tendency of up-ending the best laid of plans and the purest of good intentions.

It was while real life was doing just this and new material on the project was at a low ebb that I offered Bryce an essay called ‘Foreignness and Home Soil: The American Horror Movie Post 9-11’, which he duly published online. I was quietly proud of the article and heartened that he was able to use it.

When the project concluded and the final essays were posted, Bryce lost no time in kicking up ‘Son of Danse Macabre’ up a notch: drawing the material together, polishing and expanding it into the full-length book it had been envisioned as; and which can now be yours for the ridiculously low price of $2.99 (or £1.85 if, like me, you’re in the UK).

Before it went on sale, Bryce asked me if I wanted ‘Foreignness and Home Soil’ back to post on Agitation, with the alternative that he could include it as an appendix. I felt the essay needed the context of ‘Son of Danse Macabre’.

Thus I find myself at the crossroads marked “conflict of interest”. I’d love to write a straight-up review singing the praises of ‘Son of Danse Macabre’ – because it’s a hell of a good piece of writing, shot through with passionate, knowledge and insight. But I’m featured in it.

So what I’m saying is: it’s an accomplished piece of film criticism, it’s completely affordable and if you’re a fan of Bryce’s indispensable blog Things That Don’t Suck – or a fan of horror movies in general – there’s no reason it shouldn’t be on your reading list.
Posted by Neil Fulwood at 6:15 PM 2 comments: