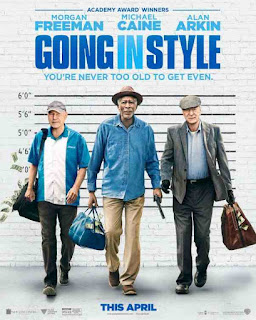 Let’s be honest: under any set of objective analytical criteria, ‘Going in Style’ is a pretty average movie. Its screenplay isn’t just predictable: you can literally cue in every narrative beat on a scene by scene basis. Matters pertaining to the gift of a watch and the capturing of a specific bit of CCTV footage are set up in such thunderously obvious style that their later relevance is something you can see coming like an ocean liner on a duck pond. The look of the film and its production design are entirely utilitarian. And with the exception of one whirlingly terrific scene where the sketching out of a bank’s floorspace segues into a “planning the job” montage, helmer Zach Braff doesn’t bring a single directorial flourish to the table. Had ‘Going in Style’ been made with a lesser cast than Morgan Freeman, Michael Caine, Alan Arkin, Christopher Lloyd, John Ortiz and Ann-Margret (who, at 75, still has more va-va-voom than many starlets a third her age), it wouldn’t have had much to recommend itself beyond the obvious anti-establishment satisfaction of watching a bunch of old dudes pull off a heist. (And let’s face it, Arkin’s contemporary Frank Langella set the seal on that concept in fine style with ‘Robot & Frank’ five years ago.)

That Caine and Freeman would play off each other in fine style was a done deal. That Arkin would bring his deadpan sarcasm A-game, ditto. Eccentric, scene-stealing supporting work from Lloyd? Guaranteed. Ortiz being cool just by underplaying? The man has the patent on it. Now throw in perfectly acceptable work by Matt Dillon as a determined FBI guy, Peter Serafinowicz (an actor often denied sympathetic roles) as Caine’s son-in-law, and Joey King as Caine’s granddaughter. Everyone’s engaged and, for the most part (Josh Pais as an unctuous banker is the over-egged exception), the cast pitch their performances to each other’s strengths; sure, Freeman, Caine and Arkin are the top billed talent, but ‘Going in Style’ is inarguably an ensemble piece.

The plot shouldn’t need a rehash for anyone who’s seen the trailer (hell, even a glance at the poster would probably do the job), but for the sake of completeness, here goes: three OAP buddies who worked at the same steel plant together are robbed of their pension when the firm undergoes financial restructuring; family commitments, health problems and an increasing awareness of their own mortality add to their woes. When one of their number is witness to a bank robbery, one that the media widely reports the perpetrators as getting away with, they decide to pull a similar job. That the bank is administrating the steel plant’s restructuring is the decider: they agree to take only what was depleted from their pension, superannuated by their assumed remaining lifespan (the scene where they each speculate how much longer they have is one of the best moments the film delivers).

Hands up everyone who’s pegged ‘Going in Style’ as ‘Hell and High Water’ with a free bus pass. Yeah: me too.

It’s derivative as all hell. At one point, Braff has his protagonists watch ‘Dog Day Afternoon’ on TV (“I don’t want to see the ending” one them muses) and the inclusion of footage from such an edgy and powerful classic almost sinks ‘Going in Style’. Elsewhere, the tone veers from meditations on the indignity of ageing that wouldn’t be out of place in ‘The Straight Story’ to knockabout farce that makes the average ‘Keystone Kops’ two-reeler look like Tom Stoppard.

And yet … and yet … despite everything – despite the fact the screenplay presents less a fluid narrative than a shunted-together collection of vignettes; despite the fact that the performances from the name-above-the-title triumvirate constitute screen work they could do in their sleep; despite the poundingly unsubtle sops to the audience’s emotions – it works. ‘Going in Style’ somehow finds a way to benefit from its hoariness, its obviousness, its lack of originality. It reminded me of ‘Papadopoulos & Sons’ in its conversion of comfort-food aestheticism into a fictive zone in which the characters are presented to you like old friends, their journey unfolds exactly as you expect (and moreover want) it to, and you’re simply allowed to enjoy the ride.
Posted by Neil Fulwood at 11:22 PM No comments: 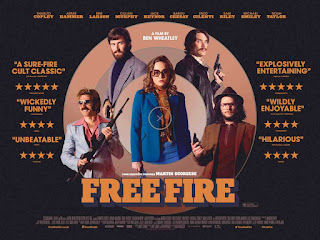 Let’s start by shooting the elephant in the room. And why not, since everything the fuck else gets shot in Ben Wheatley’s new film? ‘Free Fire’ is a technical exercise and nothing more. It’s an experiment in the spatial possibilities of a single location utilised to its maximum. It’s the work of a filmmaker, in thrall to every cool crime flick made in the Seventies, wondering how long he can drag out the shoot-out for. For almost the entire movie, it turns out.

As a narrative, ‘Free Fire’ can be summarised in less than twenty words: various crims converge on a warehouse to do an arms deal; everything goes tits up; gunplay ensues. Sure, I could pad that out to tell you who the characters are and who they’re played by, but that wouldn’t get us past the fact that they’re all ciphers, so let’s just think of them at the One With The Bad Sooth Ifrikaan Accent, the Moody Oirish One, the Snivelling Little Weasel and the Wiseass Douchebag whose mutual antipathy prompts the conflagration, the Too Cool For School One, and the Token Chick. That’s not me being sexist, by the way. Brie Larson’s character is basically referred to as a “chick” or a “bird” and only the actress’s natural screen presence allows for any characterisation beyond that.

As a crime drama or thriller, ‘Free Fire’ does nothing you haven’t seen before. The abandoned warehouse/decayed urban setting is reminiscent of ‘Reservoir Dogs’, ‘Trepass’, the last scene of ‘The French Connection’ and several dozen others at least. The dialogue – save for a handful of throwaway lines used to comic effect – is functional at best.

And even reckoned as an entry in cinema’s century-long pantheon of great shoot-outs – the film’s self-acknowledged raison d’être – it never comes close to achieving the catharsis of Sam Peckinpah’s ‘The Wild Bunch’ or the sheer visual poetry of John Woo’s ‘The Killer’. Candles, fluttering doves and balletic dives by cool guys in long coats and shades firing two-handedly are notable in ‘Free Fire’ only by their absence. Nor does Amy Jump’s script engage with the interrelationships of the various groups who find themselves at odds and out to kill each other. Peckinpah would have rigorously interrogated the psychology, motivation and group dynamics so that even the longest and most visceral climactic bout of violence would have felt earned, devasting and inevitable. For Wheatley and Jump, the shoot-out exists for its own sake.

And therefore we have to evaluate ‘Free Fire’ purely for its technical prowess, since its so resolutely disavows any other frame of reference. Which is probably just as well since the performances – apart from Larson and Wheatley regular Michael Smiley – are generally terrible, the use of music cues is hackneyed, and the attempts at Scorsese- or Tarantino-style iconography near the start is mere copyism. Indeed, there’s precious little in the first 15 minutes to remind you that Wheatley was the dark, provocative talent behind ‘Kill List’, ‘A Field in England’ and ‘High-Rise’.

Still, it takes no more than those first 15 minutes to establish ciphers (sorry, characters) and setting and get everyone edgy and trigger happy. And once the shooting starts, Wheatley’s directorial prowess leaps to the fore. Unlike so many contemporary films – where choppy editing and shaky camera work conspire to leave the viewer in abject confusion as to who is where and shooting at whom; or where spatially finite interiors suddenly take on Tardis-like dimensions as heroes and villains range over seemingly endless square-feet of foot space and they squeeze off round after round – ‘Free Fire’ sets out its stall quickly and precisely in terms of the warehouse’s dimensions, the antagonists’ spatial relationship to each other and the ballistic capability of the weaponry on display, and plays scrupulously fair by its own rules.

What I took away from ‘Free Fire’ – more so than the observation that even the world’s worst perm, a coating of grime and some blood splatter can’t make Brie Larson anything less than radiant – is how incredibly well thought-out the film is. This wasn’t just a case of handing over the action stuff to a second unit; this is the work of a director who is genuinely interested in the aesthetics, logistics and challenges of shooting action, and the film benefits immeasurably from Wheatley’s complete engagement. He also makes a wise decision in not taking the material seriously, instead allowing it to unspool as an absurdist black comedy. Which isn’t say that ‘Free Fire’ is entirely fun-with-guns or muzzle-flash-and-quickfire-gags; the cynical cruel streak that runs through all of Wheatley’s oeuvre is present and correct here.

Full disclosure: I enjoyed ‘Free Fire’. It delivered up some decent belly laughs and it was just ridiculous enough to appeal. I can’t fault it on a technical level (the sound design, in particular, is something to be marvelled at). But I can’t help wondering what Wheatley’s motivation was. For all its strong points, so much of it seems like a showreel to demonstrate what he can achieve with a small budget ($10million) and that he can be trusted to deliver standout set pieces. What I’m hoping is that ‘Free Fire’ is a letter of introduction to the money men whose chequebooks can make possible his much mooted remake of ‘Wages of Fear’. If this is the case, we should all go out and see it, and maybe in 2019 or 2020 I’ll happily be reviewing the film that I’m convinced will be Wheatley in excelsis.
Posted by Neil Fulwood at 12:32 AM No comments: