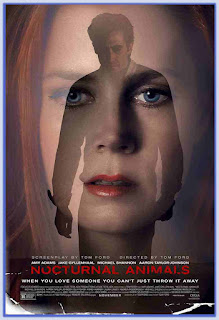 For anyone with a serious redhead fetish, ‘Nocturnal Animals’ – which features no less a quartet of world-class beauties of said hair colour than Amy Adams, Isla Fisher, Ellie Bamber and India Menuez – might well prove their ‘Citizen Kane’. (It also stars Andrea Riseborough, an equally not-troubled-by-the-ugly stick redhead, but buries her under a brunette frightwig.) For anyone else … hmmm, well …

‘Nocturnal Animals’ is a Tom Ford film. I know this because the opening credits are ushered in by the authorial statement “a Tom Ford film”. As are the closing credits. Seriously, the moment the final shot fades to black, there it is: “a Tom Ford film”. But let’s get back to the opening credits for a moment. As they crawl towards their interminable conclusion, overlaying slow motion shots of morbidly obese people dancing naked in slo-mo – a series of images that has no bearing on what follows and is never revisited – the last three are “produced by Tom Ford”, “screenplay by Tom Ford” and “directed by Tom Ford”.

Tom Ford has obviously never heard of the traditional “written, produced and directed by” credit. Or he has, but rejects it in favour of stamping his name on his product as omnipresently as possible. Tom Ford is also a fashion designer, and it might be that his fixation with labels extends to his new career as a director. ‘Nocturnal Animals’ is his second film and it should probably be legislated that you don’t get to say “a Your Name film” on your films until you’ve directed at least half a dozen of them and genuinely proved yourself as an auteur.

But, for better or for worse, ‘Nocturnal Animals’ (one of the worst titles I’ve come across since Nick Willing’s ‘Photographing Fairies’ back in 1997) is a Tom Ford film, so let’s take a few paragraphs to discuss what it has to offer in all its Tom Fordy Tom Fordiness.

Art gallery owner Susan Morrow (Adams) is twenty years divorced from non-career-focused wannabe writer Edward Sheffield (Jake Gyllenhaal), trapped in a loveless second marriage to smooth bastard, philanderer and also-ran businessman Hutton (Armie Hammer) and a distant mother to Samantha (Menuez). Her life is perfectly ordered, sterile and about two steps away from total implosion. One day, she receives a proof copy of a novel Edward has had accepted for publication (it looks more like an amateurishly bound MS rather than a set of galleys or a bound uncorrected proof, but hey ho) and which is dedicated to her.

The novel tells the story of regular guy teacher Tony Hastings, his wife Laura and their daughter India and how their family vacation turns into a nightmare after an encounter with a bunch of rednecks. Minor spoiled: Laura and India are sexually assaulted and murdered while Tony, more through his captors’ stupidity than any proactive decision on his part, escapes. Dead inside, he partners with unorthodox lawman Bobby Andes to track down the perpetrators and take revenge.

As Susan reads, she imagines Edward as Tony, and drops in place surrogates for herself and Samantha as Laura and India (Fisher and Bamber respectively). Also, she imagines the story in vicious and uncompromising detail. Andes is played in this film-of-the-novel-within-a-film by Michael Shannon and he’s the absolute motherlovin’ best thing in ‘Nocturnal Animals’ by a wide margin. Everyone else seems stilted and ill at ease, even down to Riseborough and Michael Sheen turning in caricatures in bit parts. The hillbillies – portrayed grubbily by Aaron Taylor-Johnson, Karl Glusman and Robert Aramayo – are no less clichéd.

I’ve read a broadsheet review which seriously tries to suggest that the filmed excerpts from the novel are comparable with Peckinpah. Bullshit! Peckinpah would have given the rednecks characters and rooted their motivation within a socio-economic framework, not to mention establishing a realistic dynamic as regards their interrelationships. But, y’know, Peckinpah could direct and that’s the difference.

Edward’s novel is about revenge, and in riffing on little details that force Susan to confront her memories, it is also an act of revenge in and of itself. As Susan’s carefully constructed rationales for her equally carefully constructed lifestyle begin to implode, she wanders through her gallery and is confronted by a painting she can’t even remember acquiring. Black paint on white canvas: the word “revenge”. At this point I wondered if Tom Ford was going to run round from behind the camera, flick a speck of non-existent dirt from his impeccable Tom Ford suit, point at the painting and enquire of the audience whether they were fully aware that this is a film about revenge. And then perhaps deliver a short lecture on how it’s also a film about how the hollow lives of upper-middle class entitled people who do each other emotional violence are thrown into sharp relief by the story of a life rendered hollow by an act of physical violence committed by the underclass.

Tom Ford’s obsession with the rednecks’ filthy lifestyles – right down to showing his audience a post-arse-wipe scrap of toilet paper (thanks, Tom) – is if anything more prurient than his love of lifestyle porn. Seamus McGarvey’s cinematography certainly emphasises this, exercising cool restraint as his camera prowls the art gallery or Susan’s clinically neat des res, then happily rubbing the viewer’s nose in degradation whenever the hillbillies are on screen. And can I say once again how fucking stereotypical these boys are? I half expected the end credits (“a Tom Ford film”) to refer to them as Bubba, JohnBoy and BillyBob Rapist.

‘Nocturnal Animals’ is undoubtedly well made. Thought went into every aspect of it. They way thought goes into films by Lars von Trier and Michael Haneke. And like those boys, for all the artfulness behind the enterprise, it’s difficult to shake the feeling that buttons are being pressed and controversy courted for its own sake. I’ve said before on these pages that von Trier and Haneke remind me of nine-year-olds who have just figured out that saying “fuck” in the playground gets a reaction and delight in proving that observation over and over again.

Tom Ford is playing from the same playbook – not to mention playing in the same sandbox – with ‘Nocturnal Animals’. He has a cast to die for, some incredibly talented collaborators behind the camera, none of which count for much in the face of his ego and what I can only suspect are a seething raft of issues that he’d be better off seeing a therapist about rather than inflicting on paying audiences.
Posted by Neil Fulwood at 9:48 PM 1 comment: