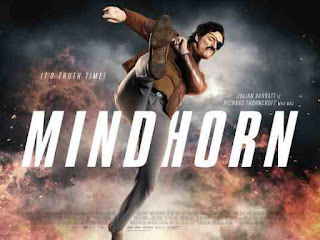 High concept goes lo-fi in this British comedy that treads similar territory to 2013’s ‘Alan Partridge: Alpha Papa’. Hell, Steve Coogan’s in both of them. Here Coogan plays Peter Eastman, an actor who’s done rather well in a forensic detective TV drama called ‘Windjammer’, a spin off of 1980s hi-tech cop show ‘Mindhorn’ whose protagonist was played by insufferable egomaniac Richard Thorncroft (Julian Barratt) and which ended after three seasons when an embarrassingly drunk and coked up Thorncroft publically humiliated himself on a talk show, offended everyone associated with the show, dubbed the Isle of Man (the series’ setting) a “shithole”, and announced that he was off to Hollywood.

Twenty five years later, having abjectly failed to make it in Tinseltown, Thorncroft is reduced to making commercials, attending auditions for rubbish parts, and haranguing his long-suffering agent (Harriet Walter). When Paul Melly (Russell Tovey), the chief suspect in a murder case, contacts the Isle of Man Constabulary to say that he will only talk to Mindhorn, Chief Inspector Newsome (David Schofield) and D.C. Baines (Andrea Riseborough) reluctantly contact Thorncroft and ask him to resume his old role. What follows – as you’ll probably guess, given the involvement of both Coogan and ‘Mighty Boosh’ regular Barratt – is a comedy of embarrassments that is, by turns, genuinely funny, dispiritingly predictable and ploddingly laboured. The moments where it really hits its stride are certainly worth the ticket price, but ‘Alpha Papa’ it isn’t.

One of its funniest set pieces is the opening, which sets up the dynamic of the ‘Mindhorn’ TV show. Full of macho posturing, overly-dramatic line deliveries and opening credits delivered in a hideous font, it’s a spot on piece of spoofery. Imagine ‘Mindhorn’ as a cross between ‘The Six Million Dollar Man’ and ‘Bergerac’ with Thorncroft’s performance akin to that of “John Actor” playing Monkfish in the recurring ‘Fast Show’ sketches. (Mindhorn/Monkfish: I’m stating the obvious here, aren’t I?) Indeed, Thorncroft’s casual sexism recalls Monkfish’s “put your knickers on and make me a cup of tea” ethos.

Director Sean Foley, whose first film this is, mines a lot of humour from the cult of 1980s. A running gag about ‘Mindhorn’ merchandise pokes fun at any number of American hit shows of the era, while the ATV logo is sneakily inserted in the ‘Mindhorn’ opening credits. And there are a handful of bitchy jokes about ‘Bergerac’ (the John Nettles starrer that was set on Jersey). Essie Davis’s role as ‘Mindhorn’ co-star and romantic interest Patrica Deville is a thinly veiled nod to Louise Jameson’s nothing role on ‘Bergerac’.

But beyond nostalgic box-ticking for 80s TV fans, what does the movie have to offer? Sad to say that Barratt is probably the least of its attractions: not only does Thorncroft have to be an arrogant price for 90% of the running time to make the concept work, but Barratt seems to enjoy playing the façade a little too much, and when the time comes for the character’s redemption in the final act, it all feels very forced. Fortunately, everyone else is on form – Davis, Riseborough and an hilariously irascible Schofield are a delight to watch, Tovey takes a very trickily written character (Melly’s mental deficiency, while again necessary to the plot, verges on exploitative) and does fine work, and Simon Farnaby nabs the Agitation ‘Man of the Match’ award for his broadly comedic yet oleaginously creepy turn as Clive, Thorncroft’s former stuntman and now romantic rival.

The hour twenty five minute running time is just right. The pace is generally decent, except when Foley takes too long to set up a joke or labours the payoff (some business involving a switched videotape is a case in point). There’s one set-piece – an assassination attempt and a high speed getaway that are assumed to be part of a civic parade, a bored dignitary giving a running commentary on the whole thing – that is inspired in its concept and pitch perfect as an archetype of British humour. Had ‘Mindhorn’ scraped together another three or four moments this good, and Barratt redialled the performance just a tad, it could have been great. But there’s no reason why the same team, with just a slightly sharper approach, can’t deliver a bona fide belter next time round.
Posted by Neil Fulwood at 10:37 PM No comments: