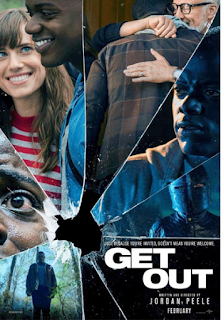 When Chris Washington (Daniel Kaluuya) and Rose Armitage (Allison Williams) take their relationship to the meet the parents stage, it’s a one-sided deal. Chris’s single-parent mother died when he was eleven. He’s beaten the disadvantage of class, race and economic background and is starting to make a name for himself as a photographer. Rose, however, is pure ivy league and it’s to her parents’ sprawling country estate that they repair for the weekend.

Does it sound like I’m gently satirising writer/director Jordan Peele? Far from it: his rigid adherence to the genre playbook is the film’s strength. Peele obviously knows his horror movies and loves them – but loves them with enough ironic remove that he can bend the formula to his particular agenda. And does he ever? And with such aplomb! ‘Get Out’ uses the structure, iconography and narrative expectations of the genre to lead its audience happily into a ‘Stepford Wives’-goes-torture-porn comfort zone, while sneakily engendering a dialogue on race, identity, cultural appropriation and the façade of liberalism.

The latter is one of the sharpest satirical blows Peele lands and I can imagine an entire tranche of Caucasian filmgoers bristling against it. It’s one thing having Bubba and John-Boy and any number of their dentistry-challenged, IQ-deficient cousins going all psycho on a black protagonist in a horror movie, but it’s quite a different dynamic when the villains are the very people for whom white-man’s-guilt hand-wringing and fiscally permitted entitlement combine to well-meaning but often wincingly patronising effect. “I’d have voted for Obama a third time if I could,” Dean espouses with deadpan sincerity at one point; “best president of my lifetime.” Missy, meanwhile, fixates on Chris’s smoking as unhealthy and badgers him to undergo hypnotherapy.

It doesn’t take Chris long to figure out that something is amiss. The too-forced jollity of the Armitages’ groundsman and housekeeper (both African-American); the token black man, all dapper outfits and plummy vowels, in their circle of friends; the parties where guests pry a little too intimately; the warnings of Chris’s best bud, airport security guard Rod (LilRel Howery, earning himself a Man of the Match award), that these aren’t the kind of people he should trust.

I wouldn’t dream of blowing the gaffe on where all of this is heading, although a fairly redundant pre-credits sequence drops some pretty heavy hints. ‘Get Out’ uses its surface as camouflage – and its surface has “dumb shlocky horror flick” written all over it. This is nowhere near as evident as in the third act, which is as dumb and schlocky as it gets, boasting some scientific shenanigans that make ‘The Man with Two Brains’ and ‘Frankenhooker’ look like documentary realism. And yet as conceptually daft as the third act gets, it’s still the best metaphor for cultural appropriation that genre cinema has yet concocted.

The film has very few flaws: it’s slightly overlong, some of the early scenes play out longer than necessary, the cinematography is a tad pedestrian in places (but only in places, mind: DoP Toby Olivers delivers a handful of genuinely striking images), and there’s no real chemistry between the leads. Although maybe that was intentional.

What it gets right, it gets right in fine style. Keener’s the best she’s been for ages, effortlessly creating an inscrutably creepy character; the comic relief (mostly courtesy of Howery) is perfectly balanced against the slow-burn tension and the gory shocks on the final act; and the use of the seemingly ordinary to create suspense, menace and imbalance is pitch perfect. This is, after all, a film in which the most antiseptically clean of guest rooms comes to feel like the dingiest of prison cells, social etiquette is revealed as racism with a university tenure, and a delicate bone china cup and saucer with the dinkiest of teaspoons can rightly take its place alongside Leatherface’s chainsaw, Freddy Krueger’s manicure and the driller killer’s toolkit as one of the most squirmily horrible instruments in contemporary horror cinema.
Posted by Neil Fulwood at 11:56 PM No comments: