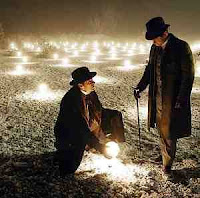 Watch Christopher Nolan's second film 'Memento' - an out-of-nowhere cult hit that set him up for what has proved, so far, a stratospheric directorial career - and marvel at its cleverness, intricacy and structural legerdemain. Watch 'Batman Begins', the most impressive franchise re-boot this side of 'Casino Royale', and marvel at his sleight of hand vis-a-vis the identity of not-quite-villain Raz Al Ghul. Watch 'The Dark Knight' - in my humble opinion the best film released this year - and be utterly gobsmacked at the narrative-fracturing possibilities of one individual's force of will (the Joker's) smashing into the ordered and rigidly defined perameters of Batman's. Consider the themes of duality, confusion of identity and obsession that permeate Nolan's filmography.

It seems somehow inevitable that he and his brother and co-writer Jonathan Nolan would adapt Christopher Priest's novel 'The Prestige'. Using the word "adapt" loosely. Priest's novel flits between time-frames (it's bookended and mesologued by contemporarily-set scenes while the bulk of the narrative plays out amidst the greasepaint and gaslight of the Victorian music halls) and features four* different first-person narrators, none of whom are reliable. The unreliable narrator is a stock-in-trade of Priest's novels. He's also interested in perspective, illusion and doubles. He's a science-fiction writer (such genre staples as time travel, cloning and alternative histories have all featured in his work) whose novels don't read like sci-fi.
As written, 'The Prestige' doesn't come across as ripe for filming. With much of the first half devoted to working class magician Alfred Borden's diary, all fractured entries and elliptical clues, and the second consisting of aristocractic Rupert Angier's journal, just as sketchy and missing crucial bits of information, the narrative essentially stops halfway, goes back to the beginning and starts again.
What Nolan does is to take elements from both sections of the novel and shuffle them like a deck of cards. This is a film about illusions, and as such takes the form of an illusion itself. The opening sees impresario Cutter (Michael Caine) explain the stages of a magic trick - the promise, the turn and the prestige - to a young girl (who is she? - very important, this - and where, chronologically, does this occur?); he also gives evidence at the trial of Borden (Christian Bale), who is accused of murdering Angier (Hugh Jackman). Oh, and there's some business about a lot of top hats in a forest that comes on like 'Miller's Crossing' in a time-warp. Forest, what forest? And why so many hats? It's important; keep it in mind.
Do not take all of this at face value. Take some of it at deeper than face value. There are clues even in misdirections.
It's a film about illusions and it takes the form of an illusion, but 'The Prestige' isn't a parlour trick - not like 'The Village'. It's one of those rare films - 'Memento', 'A Tale of Two Sisters' and 'Deep Red' being the only other examples I can site off the top of my head - that get infinitely better once you know the twist. But, like those other films, it's not so much a twist as a complete re-evaluation and re-assessment of everything that's gone before it. The first time I saw 'The Prestige', me and Paula talked about it all the way back to the car, all the way home and all the way through a bottle of wine. Now, having seen it a good half dozen times, we still debate it after each viewing.
Of course, I can't get into a really interesting discussion of the film here and lay out some of the questions me and Paula only think we've answered, because I'd have to give away an audacious, jaw-dropping triple-whammy ending (I've spoken to some people who think it's a double-whammy ending; it's entirely possible it's a quadruple-whammy ending - like much of the film, it's up to the viewer to figure it out). And I want everyone who watches 'The Prestige' to be as blown away as I was by it.

So, I can take the easy way out and break out the superlatives, praise Christopher Nolan's faultless direction to the heavens, applaud a cluster of great performances - Christian Bale, Hugh Jackman, Michael Caine and David Bowie (a revelation as Nikola Tesla), take a bow - and rave about the period recreation, the hugely atmospheric cinematography and the attention to detail that coheres what could have been a sprawling epic full of overlapping timelines and interrelationships into intimate drama.
Or I can say that the story is driven, superficially, by rivalry (which Nolan kicks into gear differently than Priest does, and perhaps more effectively) but is, on a deeper level, about obsession, about secrecy, about dualism. About price of success and the sacrifice that is demanded. There's a third-act revelation (or maybe second act, or maybe fifth act - you work it out) that demands a suspension of disbelief that may leave you thinking the Nolan has gone a twist too far, but the key to the film is not to take it literally. True, Priest's novel takes it literally - and then takes it even further (there's a definite H.G. Wells homage going on in the latter stages of the novel) - but Nolan's genius is to render it as a metaphor. After all, this is a film about the dualism. About sacrifice.
Does it agitate the mind? Oh, you sweet fucking-A betcha!!
*Or more.
Posted by Neil Fulwood at 11:33 PM

Wow, sounds good. Now I want to watch the film and maybe read the book.

I think I got this movie confused with the Illusionist which I saw and which wasn't good.

'The Illusionist' came out shortly after 'The Prestige' and treads similar territory (even the poster design was mimicked 'The Prestige') but isn't half as good.

The book's good, but the film mines the subject matter much deeper and to better effect.

Wow cool. I thought the Illusionist was kind of laughably bad. My favorite parts were the mashed-up Austrian history and the gratuitous shot of Jennifer Biel's ass in riding pants at the end.

Plus the jewel discovered under some dry, clean hay in the stables several days after it was hidden there. I left the cinema wondering if, in the stables of a nobleman, the hay doesn't require cleaning out because the horse are simply too polite to shit.