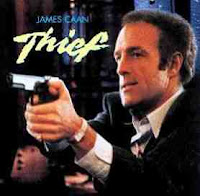 Radiator Heaven's Michael Mann week concludes today. Kudos to J.D. for hosting a successful and fascinating blogathon. I've looked forward to logging onto the internet each evening to check out the ever-growing link list. Contributions have been varied, exploring all aspects of Mann's career, and the standard of writing has been consistently high.

Three things that have emerged as a through-line in Mann's filmography:
i) his protagonists are defined by rigorous masculine codes; no matter how bad the things they do (some of Mann's finest creations are career criminals), a sense of honour underpins their actions and the worst betrayal imaginable is the betrayal of the self;
ii) he immerses himself completely in the theme, setting and psychology of each of his films; his attention to detail is precise and what other directors would consider minutaie, Mann adopts as a raison d'etre;
iii) he is more interested in the accretion of incident and the momentum of events than conventionally structured narrative or exposition.
This latter can sometimes be a weakness. I'm probably in a minority, having read so many favourable reviews of it in this blog-a-thon, but I find 'Collateral' at best an interesting failure. Yes, the high definition digital camerawork allowed for noctural scenes that were at once dreamily disconnected and poetically vivid, but other sections of the film looked flat and amateurish. Also, with DV unable to achieve of the depth of focus of conventional film, set-pieces such as the shoot-out in the nightclub lacked any sense of spatial awareness. I thought 'Miami Vice' similarly afflicted and spent two and a half hours bitterly wishing Mann had shot it on film. Another flaw in both films was that Mann's visual experimentalism (an enquiry into the aesthetics of DV in 'Collateral'; a deconstruction of narrative perameters in 'Miami Vice') seemed glaringly in opposition to the thrilleramics of the scripts, the dynamics of the character interactions and, post-'Heat', audience expectation of cool intellectualism married to visceral action in a ceremony witnessed by sumptuously gorgeous visuals.
'Thief', Mann's second feature length project (after the TV movie 'The Jericho Mile'), is a thing of wonder to revisit*. It presents you, at the very outset, with all of Mann's strengths and none of his weaknesses.
James Caan (in a joint career best with 'The Godfather') plays Frank, a career criminal who specialises in relieving safes of diamonds. He works with a small and trusted crew, uses an equally trusted fence, and keeps himself to himself. When an associate encourages him to "meet some people", Frank's response is, "I want to meet people, I'll join a fucking country club." He runs a car lot as a front and has business interests in a bar. His relationship with barmaid Jessie (a never-better Tuesday Weld) is up-and-down, while his oldest friend and mentor Okla (Willie Nelson) languishes in prison and worries that he'll never leave the joint alive. Frank has the money - evidenced by the designer suits, the silk shirts and the gold watch - but with Jessie unable to have children and the adoption system not enamoured of Frank's prior stints in jail, it's what he can't have that stings the most.
Then his fence turns up dead, $85k of Frank's money lifted from his corpse. Frank goes after the money. He gets it back, but at a price that will soon prove way too high. In one fateful meeting, Frank goes from being Mr Anonymous to his reputation proceeding him. Mob boss Leo (Robert Prosky) makes him an offer: a handful of high-profile takes, maximum risk but big money and the cops and the judges paid off if the shit hits the fan. Frank's cagey but Leo sweetens the deal: he sets Frank and Jessie up with a house, arranges an adoption, plays the father figure.
But when Leo stiffs Frank on his cut after a daring heist (prompting Frank to lose his rag and announce that he wants out), a different Leo emerges. Earlier in the film, during the heart-to-heart that stabilises Frank and Jessie's relationship, he recounts his time in prison, in particular how he survived because he had nothing to lose. That sense of nihilism communicated itself to the other inmates. Frank has continued to live by this code on the outside. "I'm the last guy in the world you want to fuck with," he tells an antagonist at one point, pulling a piece on the guy and giving every impression that he's ready to use it. Later, pissed off at Leo's duplicity, he reacts like a bull in a china shop instead of exercising caution or circumspection.

It's Leo who brutally throws into relief just how far Frank has deviated from who he truly is: "You were one of those burned-out, demolished whackos in the joint - you're scary because you don't give a fuck. But don't come on to me now with that jailhouse bullshit, 'cause you're not that guy anymore. Don't you get it, you prick? You've got a home, a car, businesses, a family. And I own the paper on your whole fucking life. I'll put your wife on the street to be fucked in the ass ... Your kid's mine because I bought it. You've got him on loan. He is leased. You are renting him."
Ultimately, with everything he's sold himself out for at risk, Frank has no choice but to throw it all away. In what plays out like Tarkovsky's 'The Sacrifice' by way of 'Mean Streets', Frank tears down the artificial construct he thought was the life he wanted and reintegrates with himself.
Impressively constructed, tightly directed, atmospherically shot and crafted with perhaps the strongest sense of narrative evidenced anywhere on Mann's CV, 'Thief' manages to be, in its shattering denouement, a morality tale, a work of bleak existentialism and a fuck-off good action thriller all rolled into one.

*Although not necessarily in the director's cut. Tim's review at Antagony & Ecstacy will tell you why.
Posted by Neil Fulwood at 11:16 PM

Nicely done, sir! I am really impressed at how much love this film has been getting over the past week. You really don't see it get discussed much but obviously it has a lot of admirers.

I really dig it too and the ending, how Frank lets go of everything that means anything to him and becomes a ruthless killing machine, gets me every time. It really is impressive how he goes after Prosky and his crew.

It's a shame that you don't think more highly of COLLATERAL. I think it is really quite a good film and the DV camerawork doesn't bother me at all. I also disagree with you about how the nightclub shoot-out is choreographed. I think that Mann really does convey a sense of place and if there is any confusion that may be that he wants you to get caught up in the chaos that is created once Vincent cuts loose.

"I am really impressed at how much love this film has been getting over the past week."

Amen to that! It figured in your link list from the off, and everyone who wrote about it seemed to find something new and interesting to say.

Re: 'Collateral'. I've read every article in the Michael Mann week dedicated to it and I'm starting to feel that I should go back to it in the spirit of re-evaluation. Who knows? It might surface on The Agitation of the Mind if I find my sentiments have changed.

Thanks for the congrats and if you have the chance you should give COLLATERAL another chance. Like many of Mann's films I think it improves upon subsequent viewings.