Public service announcement: in the pub after work last night, a stressful week at the office and a few nights with minimal sleep caught up with me, and I experienced a motivational shut-down that extended to a complete incapacity for social interaction (my apologies to those I was out with) let alone watching and blogging about movies later in the evening. I dragged myself home and slept for 12 hours. Consequently, I’ve only just got round to watching ‘Terminator Salvation’ and, again, what follows is hastily written and the product of first impressions. Normal service (and normal standard of reviews) will be resumed next week. 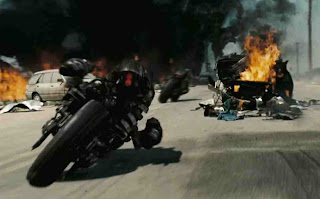 Okay, I’m wracking my brains how to start this article. Do I get into the semantics of whether ‘Terminator Salvation’ is sequel or prequel, or – given that concept behind the franchise is essentially an ouroborus – just another stepping stone towards (although not quite) completing the circle?

Do I try to get my head around an anomaly …

… in the Skynet avatar (Helena Bonham Carter)’s conversation with Marcus Wright (Sam Worthington) where she/it tells him, “Our best machines failed time and again to complete a mission. You did what Skynet has failed to do for so many years. You killed John Connor.” The events of ‘Terminator Salvation’ play out in 2018 and culminate with John Connor (Christian Bale) meeting Kyle Reese (Anton Yelchin) for the first time, yet Skynet doesn’t send back the first of the cyborgs, the T-101, until 2029. WTF?!?!

Or do I just get down to the bit of business I’d rather not engage with, grit my teeth, spit blood, curse like a trooper and type the five words it fucking pains me to put into a sentence and record for all time on the internet?

Fuck it, let’s get it over with:

McG does an okay job.

For the record: the ‘Charlie’s Angels’ films are still crimes against celluloid and calling yourself McG is as pretentious as it is stupid. But for the most part he crafts a solid and often exciting mainstream movie. Indeed, apart from one ridiculous attempt to craft an iconic moment only to fail miserably and produce the bastard child of ‘E.T.’ and ‘The Great Escape’, McG (I hate to go on about this whole name thing, but I really don’t think the announcements read, “to Mr and Mrs McG, a son, no first name”) succeeds in making this the most un-McG-like McG film yet. 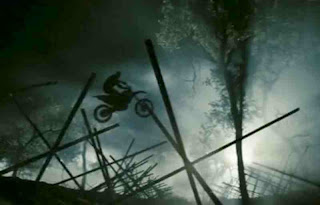 So how does ‘Terminator Salvation’ shape up to the rest of the series? Well, for the first hour or so I was beginning to wonder, with bated breath, if something of a minor miracle was in the process of being pulled off: could this be the second best entry in the cycle?

Turns out not. ‘Terminator Salvation’ gets some things absolutely right, and it’s only fair if we dwell on those things for a little while, but it drops the ball in a few places (and does so with increased regularity as it draws towards its curiously anaemic ending) and the end result is a film that doesn’t quite hang together.

Here’s what it does well. First and foremost, it gives us a John Connor who isn’t a whiny little brat or a bland twenty-something with all the leadership qualities of a particularly nervous dormouse. It gives us, instead, Christian freakin’ Bale. If there’s anyone you can imagine taking the fight to the machines and tearing their fucking lights down (sorry, couldn’t resist), it’s Christian freakin’ Bale. Secondly, it backs up Bale’s screen presence with good performances from Sam Worthington (there are no real surprises in his character arc, but the actor manages to invest Marcus with a palpable sense of enigma) and Anton Yelchin, reverse engineering Michael Biehn’s performance to give us a younger and still vulnerable, but swiftly toughening up, Kyle Reese. Thirdly, the effects piss all over ‘Rise of the Machines’, the Hunter-Killers glimpsed briefly in the earlier films tearing through the fabric of this one. Fourthly, the Mc-to-the-G keeps the aesthetic desaturated, grim and gritty; ‘Salvation’ is a colourless vision of the future shot through with the shaky visceral immediacy of a war movie, most of its battles pitched at the level of street to street combat. 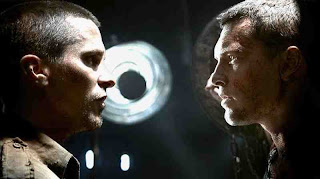 Where it drops the ball is (a) the backgrounding of John Connor for much of the first half (the film’s absolute best scene – a chase featuring a Hunter-Killer, some driverless motorcycles and a wrecking truck – is a showcase for Marcus Wright and Kyle Reese); (b) the wasted opportunity to follow Connor’s development from footsoldier to leader (a title crawl suggests that some resistance fighters already see him as a prophet, others as a fraud, but the script neither establishes why nor explores the dialectic); (c) a handful of anomalies, mainly regarding timeframes (obvious example: Kate, now Connor’s wife, though played by a different actress – Bryce Dallas Howard – seems no older in 2018 than she was in 2003’s contemporarily set ‘Rise of the Machines’); and (d) the lack of a clearly defined antagonist. With Marcus Wright’s agenda kept ambiguous, it is left to actual hunks machinery rather than anthropomorphosized cyborgs to provide the actual threat to the resistance fighters. There’s nothing as memorable as the T-101, the T-1000 or the T-X and ‘Salvation’ suffers as a result.

And then there’s the ending. I haven’t quite figured out how I feel about the ending yet. I have a strong suspicion that something narratively redundant and thematically pointless has been passed off as a moment of great emotional import. I might need to watch the film again. And that’s something I never thought I’d say about a McG flick.

I enjoyed it because it was bleak, it took place entirely in the future (which was something I always wanted to see from the Termninator franchise) and the effects were awesome!

That scene with the giant HK tearing up the place and then that scene that takes place on the bridge...awesome stuff! A great chase sequence that rivals the ones seen in previous Terminator films.

The ending dissapointed me, Cyberdine didnt look as machine like or as robotic as I expected. It should have been cooler looking, they should have called in a conceptual artist with some vision and designed a cooler looking Cyberdine.

The effects on the Arnold cameo thing, didnt work all that well, and was it me or was McG mimicking step by step entire action sequences during that last fight between the T-800 and Sam Worthington? Suddenly I felt like I was watching T2 at one point!

Good call on the similarities to T2. McG steals quite a few shots - Worthington's character punching out the windscreen of the truck he's driving; a Terminator's foot mechanism gaining purchase on some steps up to a steel walkway. Very obvious visual replications.

And yeah, they should have got someone of H.R. Giger's calibre to design the Cyberdine stronghold at the end. It just looked like a leftover set from any of a dozen sci-fi movies that you've seen before. It was as if they'd exhausted the budget for the visual effects and skimped on set design.