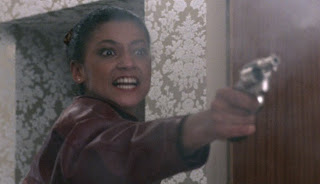 This makes for a good double bill with ‘Get Carter’. Both are harsh crime dramas filmed in grim urban locations. Both make use of blue movies for important plot points. Both have women who are still really just girls misused by the adult world. Both feature Michael Caine playing a nasty bastard. ‘Mona Lisa’ has a more sympathetic protagonist than ‘Get Carter’ and has, if not a happy ending, then at least one imbued with a modicum of hope. Though what George (Bob Hoskins), our anti-hero of the day goes through before arriving at the ending, what he witnesses and what he begrudgingly has to give up on, make descriptions like “sympathetic” and “hope” very much relative concepts.

Neil Jordan’s film – his third after ‘Angel’ and ‘The Company of Wolves’ and the first to break out to a significant audience – starts with George trying to make amends with his teenage daughter Jeannie (Zoe Nathenson) after being released from prison. He’s done seven years. His ex-wife vehemently turns him away, much to the entertainment of the neighbours. George loses his rag and a gets into a fight, against superior numbers (although he gives every impression of being able to handle himself). The situation is defused by the quick intervention of George’s best mate Thomas (Robbie Coltrane). Thomas is a Del Boy type, out to make a quick buck from various get-rich-quick schemes (spaghetti bolognese sculptures; glow-in-the-dark statues of Jesus) while running a rattletrap car repair business.

George’s seven-stretch was an exercise in keeping his mouth shut and thereby keeping gang boss Mortwell (Caine) out of the slammer. George figures Mortwell owes him, but Mortwell is in the process of legitimising his business – though, as we discover later, he’s still doing some pretty malfeasant shit – and doesn’t want an uncouth “face” like George ruining his image. Mortwell’s club-owning number two Dudley (Joe Brown – yes, that Joe Brown) fobs George off with a gig chauffeuring around high class call girl Simone (Cathy Tyson). That George, ever the stranger to the reconstructed outlook, refers to her in conversation with Thomas as “a tall thin black tart” might give you some indication of how mismatched this pair are, and how badly they hit it off. 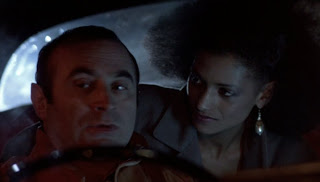 Over time, however (“time” in this instance equating to the first third of the movie), relations thaw between George and Simone. George seems to get over his incipient racism, while Simone gives him an image overhaul and sands some of the rougher edges off him. Eventually, Simone opens up about a girl she used to know back when she worked the streets – Cathy (Kate Hardie). Simone co-opts George first into driving around the seediest areas, trying to pick her out from the shadowy contingent of overly made-up and often spaced-out streetwalkers; and later into cruising the massage parlours and “gentlemen’s clubs” himself trying to find her.

As George’s odyssey takes him into some dark places – an encounter with 15-year old May (Sammi Davis) brings it home to him that girls his daughter’s age are being forced into prostitution – increasingly he looks to Simone for his salvation. But as the tagline has it, “love is a weakness”. It’s also a tightrope and George is soon walking a perilous line between knife-wielding pimp Anderson (Clarke Peters) and Mortwell himself.

Neil Jordan’s script – co-written with David Leland – trades in familiar film noir tropes: the loveless city, the little guy trapped by desperate circumstances, the beguiling but fallen woman, the hair’s-breadth chance of freedom and very real possibility of violent death that stands in the way. Between the palpable sense of claustrophobia as things inexorably close in on George, and the abject filth of the underworld he finds himself wading through, it’s a small mercy that Jordan and Leland leaven their story with some nicely judged touches of humour and humanity. An effective and unforced running joke has Thomas press onto George the battered paperback crime novels he reads with voracious appetite, challenging him to second guess the killer. This sets up two beautifully underplayed scenes: the first when George tries to talk to Thomas about Cathy and the only way he can verbalise the facts of the matter is as if it were the plot of a pulp thriller; the second after Thomas catches George mournfully watching a porno flick on VHS in which Simone has the starring role, and berates him for not finishing his book and yet “finding time to watch this crap”. 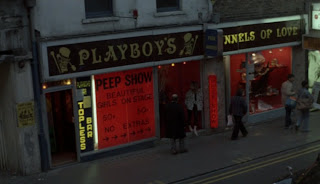 The humanity is underscored by the Johnny Mathis song that gives the film its title. It seems to be the only thing George listens to as he glides through the fetid underbelly of London in his classic Jaguar Mark II (later populised as the car Inspector Morse drove). Sweet music is a good description of Mathis’s output, and George clings to the yearning romanticism of the song. “Are you warm, are you real, Mona Lisa?” the lyric asks. By the end of the film, George has his answer. But this, albeit in shot in colour, made in the 80s and set in England, is film noir to the hilt, and the Gospel According to Mick and Keith applies.

You can’t always get what you want.
Posted by Neil Fulwood at 10:01 AM

Great to read this insightful and considered piece about this movie as it's one I've left alone for a number of years, but would now like to have another look at.

Yes, there's a lot to like about Mona Lisa and it very nearly hits as hard as Carter for me, though there are a couple of things that don't quite work for me. One thing is the unwelcome intrusion of Genesis warbling on the soundtrack as George wanders around Soho, also the Hoskins/Coltrane scenes tend to distance me from the narrative a little too much, but that may be just a personal thing. That aside, a fine film.

I love this site by the way, and reading your work has inspired me to get writing myself and set up my own blog.

Thanks for commenting. Glad you enjoyed the review. I'm with you on the ill-advised use of Genesis on the soundtrack; seldom has a song been less in sync with a film's visuals. I see your point about the scenes between George and Thomas - they teeter on the edge of whimsy, but for me they add a touch of humour that prevents 'Mona Lisa' from becoming too bleak.

Let me know when you've set up your blog - I'd be interested in reading your work.

Many thanks for your reply. In case you're interested, I've got my blog underway now, it's called "Last of the Independents". I decided to celebrate its opening with two Siegel favourites, "Charley Varrick" and "The Black Windmill". You can find it here:

Just checked out your blog (and left a comment on the 'Charley Varrick' review. I like your style of writing, and your passion for film shines through. Look forward to future posts.