The Story of the Dirty Thirty 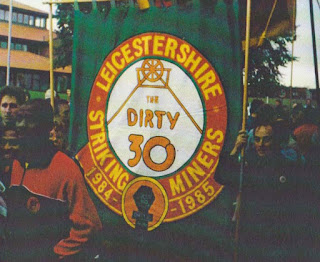 Leicester’s self-described “cultural quarter” houses Curve, an architecturally startling theatre that dominates from both street level and skyline, and the Phoenix Centre, an independent cinema and arts establishment worthy of comparison with Nottingham’s Broadway Cinema.

The Phoenix played host, on Friday evening, to the premiere of Len Holden and Brian Langtry’s documentary ‘The Story of the Dirty Thirty’. It was an evening of music, film and literature (indeed, the event was organised as part of the Everybody’s Reading Festival), featuring contributions by the Red Leicester Choir (their name emblematic of their politics rather than their choice of dairy products), David Bell and Darren Moore, one of the members of the Dirty Thirty.

Bell, upon whose powerhouse book ‘The Dirty Thirty – Heroes of the Miners’ Strike’ the documentary is based, gave a poignant introduction. A long-time chronicler of Leicestershire life and history, this particular title was published on his 70th birthday; he sent a copy to singer/songwriter/activist Alun Parry, who penned a song inspired by the Dirty Thirty; the song is featured to great effect in Holden and Langtry’s film. As Bell put it, apropos of a 135 page volume birthing an anthem and a documentary film, “as a writer, it doesn’t get any better”.

So who were the Dirty Thirty? We need to go back to the 1984/85 miners’ strike, to the bleak days of Thatcherism and a government using every dirty trick in the book to break the power of the unions. With the controversial appointment of Ian McGregor, a man whose very family had a history of strikebreaking, as head of the NCB (National Coal Board), and the stock-piling of coal reserves against pit closures where seams were far from exhausted, Margaret Thatcher essentially provoked a strike and stage-managed it under the spotlight of the media to turn public opinion against trade unionism. 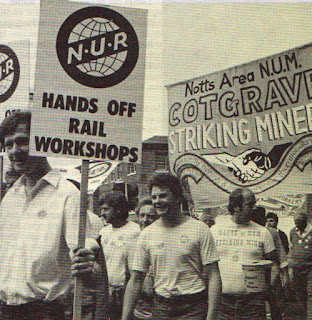 Strike action ensued and was emphatic. But it wasn’t fully consolidated. Miners in the Midlands, for whom conditions were generally better than in most other areas, continued to work. This paragraph pains me to write as a son of Nottingham, and pains me even more to write as the grandson of a miner, Harry Fulwood – born in the last days of the 1800s – who worked down Annesley pit and was out in the 1926 strike and did what was right. My grandfather died before the 84/85 strike and never got to see how many Midlanders scabbed.

To play Devil’s Advocate – and it really is the work of the Devil, since first principles state that you never cross a picket line – many of the Midlands miners were on the cusp of redundancy after 20 or 30 years, their pits destined to close anyway. Redundancy packages that would have paid off their mortgages and funded their children’s educations. Redundancies that would have been nullified if they joined a picket line. Men, in other words, who were blackmailed into scabbing.

Out of more than 2,000 miners in the Leicestershire coalfields, a little over 30 joined the strike: 19 from Bagworth pit, including Malcolm “Benny” Pinnegar, the leader of the group, and the others from Elliston, Whitwick and South Leicester pits. One worker alone from South Leicester – Johnny Gamble – joined the strike. A brave and lonely decision, and every time I hear somebody being referred to as “having balls”, Gamble’s example is the bar I set in terms of evaluation.

The Dirty Thirty took their name from a critic, an anti-unionist who phoned Radio Leicester to join in a debate about the strike. Asked what he thought about the minority of striking miners in Leicestershire, he picked up on their paucity of numbers and dubbed them the Dirty Thirty. He did them a bigger favour than he could possibly imagine. Like the Suffragettes and the Old Contemptibles, they seized what was intended as a pejorative and recast it as a mission statement. 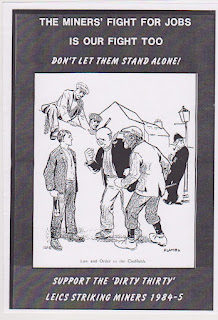 Holden and Langtry’s film, clocking in at no more than an hour, is a low-budget (I suspect a no-budget) production that is all the more impressive for not being bankrolled, not benefiting from tip-top production facilities, not having a kick-ass distribution deal lined up, and not slotting neatly in line with current political thinking and media-friendly editorialising. Essentially, Holden and Langtry approached the project in terms of producing a social document, of preserving the actions of those prepared to stand against what they saw as reprehensible (contextual interjection: the Dirty Thirty and their families went without pay, or local union approved strike pay, for the duration of the strike), and of raising public consciousness in a political environment where the incumbent government is demonstrably in hock to the destructive values of Thatcherism.

As a social document, the film is incredibly timely. Malcolm Pinnegar died in April of this year, just months after his scenes in ‘The Story of the Dirty Thirty’ were filmed. With other members growing old or having moved away, there is a strong sense of Holden and Langtry back-pedalling to amass as much documentary evidence as possible. The contributions by Mick “Richo” Richmond, Darren Moore and support group organiser Jane Bruton are equally as important.

As documentarians, Holden and Langtry remain commendably clear-sighted. Apart from one moment in the closing voiceover, the tone never tips over into polemic. The participants are shown as people rather than activists. The political imperative is reined in; instead we have the story of a small group of everyday men and women – a nod here to the miners’ wives support groups – who made a choice, stood for their principles, and never backed down. 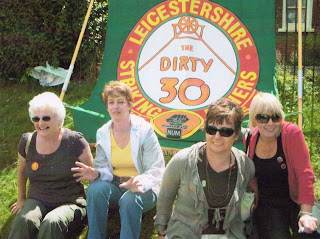 Small details are telling: Richmond wipes away tears when he recalls speaking, albeit reluctantly, at a rally. The fact that he was applauded overwhelms him. Kay Smith, part of a miners’ wives organisation, recalls a theatrical production that depicted the struggle. She’s overwhelmed that a trained actress portrayed her. Nearly thirty years later, these ordinary men and women who became extraordinary by dint of the battle they fought, still evince a humility and good grace.

David Bell has said that, in interviewing the Dirty Thirty, they refuse to consider themselves heroes. Bell’s book, Parry’s song and Holden and Langtry’s film - a low-budget and lo-fi piece of work that nonetheless has a whole lot of heart – prove otherwise.
Posted by Neil Fulwood at 1:00 AM

Lovely review. Shall forward it to Hubby aka TPL (The Pit Lad) whose Daddy Certainly Struck (DCS) being a miner at Hetton-le-Hole, part of the big Sunderland Durham area full of mines then. He chose to stay home baking rather than see the film - maybe a bit too close to home to contemplate??? Or maybe his 43 sojourn in the 'effete south', as the North East have called it, has siftened him up. But I shall buy the DVD and make him watch it. Also The Daughter and her 'exclusive', James, not born til 87, and thus needing a history lesson.

Thanks for commenting, Jan. Definitely worth acquiring on DVD and an important piece of social history for those too young to have lived through it.

Hi there, I wondered if you might grant me permission to use the photo of the Dirty Thirty poster for my PhD research? Many thanks, Emily

No problem Emily please use it with our blessing. Len & Brian