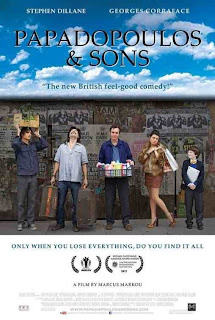 In some respects, writing about film should be easy. When every narrative beat plays out exactly as you anticipated, when the romantic subplots conclude with pairings-off straight out of Rom-Com 101, and when the central conflict that gives the film such dynamic as it has is resolved in crowd-pleasing, heart-warming fashion, writing about that film should be easy, right? Toss out the words “formulaic” and “predictable”, cite a couple of examples, job done. And given the aforementioned tendency to crowd-pleasing and being heartwarming, you could write the thing up for schmaltz, as well.

But here’s the rub. Occasionally – very occasionally – you come across a film like ‘Papadopoulos & Sons’. The debut feature of writer/director Marcus Markou, it trades on a highly familiar narrative arc, some stock characters, and an ending of such unalloyed optimism that the protagonists literally dance in the streets. It doesn’t have a single original idea. And yet it’s the most pleasurable hour and three quarters I’ve spent in a cinema auditorium this year.

Opening with a montage of London as a monument to Big Business, Harry Papadopoulos (Stephen Dillane), a heavily Anglicized Greek immigrant, is introduced as the recipient of a European Business Award. He’s a restaurateur and food manufacturer, and he’s about to move into the property market with a mall development – the grandiloquently named Papadopoulos Plaza. In doing so, and demonstrating the kind of hubris that’s almost guaranteed to presage failure, he overstretches himself to the tune of £30million. And when the banking crisis suddenly explodes, he finds his business on the knife-edge and his palatial home swiftly inventoried by the administrators.

Harry’s a widower; his three children – eldest son and reluctant heir to the business James (Frank Dillane), daughter Katie (Georgia Groome) and wannabe businessman youngster Theo (Thomas Underhill) – react in different ways to the loss of their privileged lifestyle, the reappearance of black sheep uncle Spiros (Georges Corraface), and their removal to a cramped and decaying bedsit above The Three Brothers chip shop, the last untouchable bit of Papadopoulos property on account of Spiros’s joint ownership. Estranged for a decade, Harry sheepishly implores Spiros to sell the property (it hasn’t been an active business in years) and let him have his share. Spiros, however, sees it as a chance for them to rebuild their relationship and insists instead that they reopen the chippie as joint managers. This doesn’t go down well with Hassan (George Savvides), owner of the kebab shop across the road, and tempers are further inflamed when Katie strikes up a relationship with Hassan’s son Mehmet (Cesara Taurasi).

Meanwhile, Harry engages shady business advisor Rob (Ed Stoppard) and his ex-pat American colleague Sophie (Selina Cadell) to put together a rescue package, even at the cost of selling out the Papadopoulos name. The oily Rob eagerly courts a Scandinavian bank who propose a Mephistophelean solution while Sophie, increasingly drawn to Harry, suffers pangs of conscience at the inimical financial brutality at the heart of the business world.

There’s a lot going on, and all of it treads a well-worn path. Riches to rags moralising. The importance of family. (The incremental Harry/Spiros reconciliation is played out against Sophie’s transatlantic separation from her family.) Heritage. The villainy of corporationism vs the heroism of the independent trader. Love conquering all. Additionally, there’s a handful of caricatures, character-wise, not least the shiny-suited Rob, a Viking-obsessed Nordic banking executive, and two gay repossession agents. Fortunately, though, the script delivers a proper degree of characterisation and emotional investment in the main characters.

In almost every scene, the sense of familiarity works. It made me think of P.G. Wodehouse’s ‘Jeeves and Wooster’ stories, or John Mortimer’s ‘Rumpole’ tales: there’s a formula at work and it’s aesthetically (but not rigidly) adhered to; and the result is that you relax in the company of the characters. They become like old friends. And when you don’t have to bother about the narrative with Wodehouse, you can concentrate on and enjoy all the more the wit and wordplay. With Mortimer, you get a whole lot more out of the satirical broadsides by dint of letting the plot get on with itself.

‘Papadopoulos & Sons’ pulls off the same trick: you know exactly where it’s going (the predictability staying just on the right side of comfortable and never lapsing into tedium), which makes it easier to appreciate the performances – Markou definitely has a facility with actors; Dillane is pitch perfect, Corraface does his best work in ages, and Groome is often hilarious as the spoiled fashionista gradually dipping a toe into the real world – and the script’s inherent warmth and simple faith in the things that truly matter.
Posted by Neil Fulwood at 10:33 AM