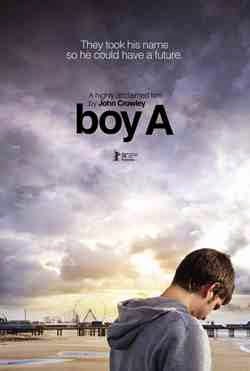 "They said I can choose my own name, any name?" says Eric Wilson, a.k.a. Jack Burridge, in the opening scene of 'Boy A'. It's a line that immediately establishes what the film is questioning. Identity. Who you are, who you don't want to be, who you can become.

Originally screened on Channel 4 in 2007, the film is an adaptation of the novel by Jonathan Triggell and it's easy to see why it's compared to the James Bulger case. But it shouldn't be. What 'Boy A' does is use the Bulger case to haunt the film, rather than be a version of it. 'Boy A' is essentially a coming-of-age story.

Jack Burridge (Andrew Garfield) has just been released from a young offenders' institution for a monstrous crime that he was involved in as a child, the details of which are gradually revealed as the film progresses. Terry (brilliantly played by Peter Mullen) is a probation officer who guides Jack into civilian life. What is apparent from the very beginning is how little Jack knows about real life: he doesn't know how to spend his wages, or what a panini is.

The relationship between Terry and Jack is almost father and son like, and it becomes obvious that Terry is proud of Jack as he becomes more independent in his new life. Terry introduces Jack as his nephew to Kelly (Siobhan Finneran), an acquaintance of Terry's who takes Jack in as a lodger. Terry helps Jack to secure a job at a local firm; it isn't clear what his duties are, but minor details are irrelevant. What is so fascinating is Jack's reactions to normal occurrences. He befriends his work colleague Chris (Shaun Evans) and begins a relationship with the office receptionist Michelle (Katie Lyons).

When Jack is invited out on a night out with his colleagues, he worries he may drink too much and reveal his past. During the evening, his colleagues keep encouraging him to relax and it is only when he is given a tab of E that he finally does so, cutting loose with some manic dance moves along the way. When the group enter the nightclub, there is an almost dream-like feel to the scene which emphasises Jack's innocent exploration/perception of his new surroundings. It is as if he can't quite believe what is happening to him, not just as a result of the drug, but the more natural high of enjoying his new life. He might be wondering if it is all a dream.

The evening ends, however, with a violent altercation that results in Jack nearly beating someone up, giving a glimpse into what he might be capable of and providing a reminder of his past. There is a flashback sequence of a young Jack - or Eric Wilson as he was then - and his friend Philip in an argument with a gang of older boys. Philip is depicted as the more violent of the two, aggressively laying into one of the gang members, and it is clear that he is the instigator in the pairs' misdoings.

The flashback sequences work very well throughout, every so often revealing a bit more of Jack's past, leaving the audience guessing as to the nature of his crime. Cumulatively, this makes for uncomfortable viewing, particularly in a sequence towards the end of the film where Jack's past catches up with him. The dream-like quality is also emphasised in these scenes. Sunlight suffuses the screen, lending a hazy feel to the outdoor scenes. Frequent scenes of Philip and Jack outside sets up a counterpoint to their future life of restraint in the young offenders' institution.

It is the denouement where Garfield really excels. Ironically, an act of heroism, rescuing a child from a crashed car, brings Jack to the attention of the local press. This precipitates a jealous response from Terry's son, disgusted at his father's drunken declaration that he sees Jack as a son, and the media focus suddenly turns upon Jack's hidden past. After being sacked from his job and Michelle's phone turned off, the realisation kicks in that the people he knows have found out about him. His breakdown is intense. Walking the streets in a hooded top, he becomes a fugitive and essentially a victim of his own crime. Unpredictably, he ends in a Blackpool where he sees Michelle on the pier and she tells him she would have forgiven him. This, however, appears to be another of the dream-like scenarios that have filled the film, and 'Boy A' leaves the audience to guess whether Jack, having left voicemail messages saying goodbye to Terry and Chris, is going to take his own life on Blackpool pier.

In what is easily Garfield's finest performance (it's a real shame he went down the Hollywood route rather than delivering more work of this calibre), he brings a boyish, fractured quality to his portrayal of Jack. He is awkward and innocent. There are moments in the film where you really care for him and it is practically forgotten why he essentially has to grow up at the age of 24 when he has already had three different lives: Eric Wilson, Boy A and finally Jack Burridge.