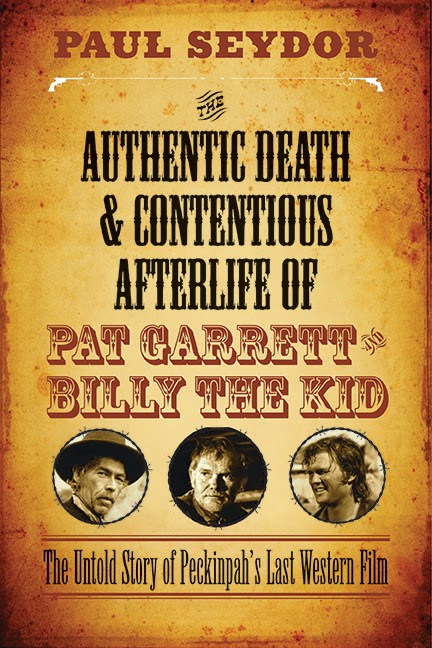 Troubled film shoots aren’t exactly a rarity in Hollywood, nor are compromised visions. Factor in everything that conspires against artistic creativity from rewrites to reshoots by way of studio interference, director/producer battles, on-set disasters, overruns, budget reconfigurations and even filmmakers removed from projects, and it’s amazing that movies get made at all, let alone good ones. Sam Peckinpah was a world-class filmmaker as renowned for the visceral intensity of his artistic vision as he was notorious for combativeness. More than most, he found himself often at loggerheads with his studio paymasters. And arguably no more bitter battle was fought than that between Peckinpah and MGM head James Aubrey. The battle was one of the most curious in a career marked by conflict – Peckinpah seemed almost hellbent in provoking an antagonist who already had a fearsome reputation for fucking over directors, but instead of going head-to-head in true Peckinpah style – conducted something more akin to a passive-aggressive war of attrition. The outcome: Peckinpah walked away to make ‘Bring Me the Head of Alfredo Garcia’ and Aubrey shortly found himself sacked. The real victim, however, was the film itself.

And yet ‘Pat Garrett and Billy the Kid’ – never completed, and existing now in no fewer than five versions – had some kind of melancholy magic in its celluloid, some dark resilience, and its punch-drunk, woozy and downright subversive brilliance is still there despite (could one make a case for saying because of?) its flaws.

All of which is an incredibly longwinded way of saying that, if one considers both the film’s antecedents (historical and creative/revisionist) and its tortured path from conception to big screen, there was always a book to be written about this singular and haunting western, its director’s swansong to a genre he revolutionised and is remembered for. That book is now a reality and it’s an essential addition to the bookshelves of anyone who has a serious interest in cinema. For anyone with a genuine passion for Peckinpah’s work … well, you’ve probably read it twice over by now and you don’t need the 1200 words of this review to tell you how rewarding it is.

In fact, ‘The Authentic Death & Contentious Afterlife of Pat Garrett and Billy the Kid: The Untold Story of Peckinpah’s Last Western Film’ – its wonderfully aureate title a nod to Garrett’s own (albeit heavily ghostwritten) account of the Kid’s death, and hereinafter referred to as ‘TAD&CA’ – should need no introduction. Paul Seydor is, after all, the author of ‘Peckinpah: The Western Films: A Reconsideration’, one of the keystone texts on Peckinpah’s work (along with Garner Simmons’s ‘Peckinpah: A Portrait in Montage’ and David Weddle’s ‘If They Move … Kill ’Em’), and an insightful and energetic work of scholarship in its own right. Oh, and he also made the Oscar-nominated documentary ‘The Wild Bunch: An Album in Montage’.

In ‘TAD&CA’, Seydor doesn’t just discuss the making of the film – inclement weather, technical problems, reshoots on the QT after Aubrey forbade the extra spend, an influenza epidemic – and the Peckinpah/Aubrey conflict that took its toll in the editing rooms; he charts a throughline from the historical record vis-à-vis Pat Garrett and Billy the Kid, through the dime-store myth-making that began just weeks after the Kid’s death, Charles Neider’s reappraisal of the story as great American literature in his novel ‘The Authentic Death of Hendry Jones’ (as with Seydor’s book, the title is a tip of the hat to Garrett’s ‘The Authentic Life of the Billy, the Kid’), Peckinpah’s first artistic engagement with the material in a screenplay that would have had Marlon Brando as Hendry Jones under Stanley Kubrick’s direction (Brando ultimately jettisoned Peckinpah’s script and parted ways with Kubrick and made the film, retitled ‘One Eyed Jacks’, himself), to the tangled psychodrama that saw Rudolph Wurlitzer’s Kid-centric script develop into Peckinpah’s sombre, reflective and quite definitely Garrett-fixated masterpiece.

That’s the thing about ‘Pat Garrett and Billy the Kid’ – whatever version you may have seen it in (the most widely available cuts are the rather misguidedly titled 1988 Turner Preview Edition and the almost as misleading 2005 Special Edition which was spuriously marketed as being recut based on Peckinpah’s own notes), and whatever the flaws – this scene missing, that scene truncated, a line of dialogue that makes no sense, a bad line reading, an awful performance from a minor supporting player (I’ll “handle a crude situation with remarkable skill” and mention no names) – there’s no doubt the film is just that: a masterpiece.

Seydor’s relationship with it, beyond the chapter it occupies in ‘Peckinpah: The Western Films: A Reconsideration’, is deeper and more complex than usual for a critic or academic – even one as passionate about his subject. Seydor was the guiding hand behind the 2005 Special Edition of the film, put together for the Warner Brothers box set of the Peckinpah westerns – well, four of them: ‘Ride the High Country’, ‘The Wild Bunch’, ‘The Ballad of Cable Hogue’ and ‘Pat Garrett and Billy the Kid’; Sony Pictures were keen the include their restoration of ‘Major Dundee’ and offered Warner very generous terms, but Warner turned them down. (The disinterest in Peckinpah’s legacy that seems to permeate Warner extended to their declining to make a print of the 2005 Special Edition available when the Cannes Film Festival wanted to screen it to mark Peckinpah’s posthumous Lifetime Achievement Award.)

As it is, the box set offers adequate prints of three of the films (’PG&BtK’ has yet to exist in home viewing format that does justice to John Coquillon’s cinematography), but they’re indifferently presented and boringly slipcased; moreover, a proposed new documentary was axed over budgetary concerns, while a collection of essays intended to accompany the set never made it past the press kit. Seydor’s access to the film was limited and he worked for free to assemble the most complete version he could given the strictures of time, money and resources. This, the 2005 Special Edition, was based on a combination of the theatrical release and one of the two preview prints Peckinpah was contractually allowed in his deal with MGM (with great humility Seydor acknowledges that these incarnations, while unfinished, are the only versions of the film on which a restoration can be based with any moral and aesthetic integrity).

It was met with both praise – Kris Kristofferson considers it the best version of the film he has ever seen – and controversy; and here I must admit to some grumblings on this very blog. When I wrote about it during my Peckinpah retrospective in December 2009, I had no idea of the strictures Seydor was operating under, nor how little time he had been allowed to physically work on the editing himself. And while I miss R.G. Armstrong’s “walk across hell on a spiderweb” line and rue the truncation of the Will the coffin-maker scene on the basis of my own Peckinpah-as-Prospero interpretation, I look back at that article now and wish I’d known then what a poisoned chalice Seydor had accepted with the project and how insufficient the facilities afforded him by the studio. Had I known, my words would have been softer. For what it’s worth, let this review stand as correction and apology.

‘TAD&CA’ discusses the 2005 Special Edition at some length, but even Seydor’s own work on the film isn’t the end of the story. The final section, “Ten Ways of Looking at an Unfinished Masterpiece and Its Director”, suggests that Paul Seydor and ‘Pat Garrett and Billy the Kid’ may never entirely be done with each other. The film has a grip on him. I can entirely understand why.
Posted by Neil Fulwood at 7:52 PM

They need to go back to the drawing board and do this movie over. Almost eveyone who bought Major Dundee:The Restored version agreed that it was better 2nd time round and that the extra 12 or so minutes was worth the extra money. So why not do the same with Pat Garrett?

Aubrey was a bad guy, but Peckinpah's biggest nemesis was addiction and self-aggrandizement.

Peckinpah and Cassavetes lost themselves to abuse of their own bodies.