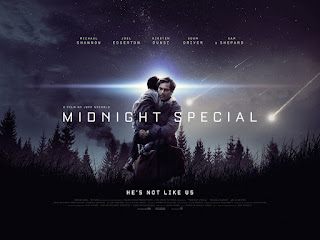 All ‘Midnight Special’ had to do to earn itself a pass from The Agitation of the Mind was simply be good. That might sound like a fatuous statement, but believe me ‘Midnight Special’ could easily have been a disaster. Given the current climate of mainstream American cinema, it would have been all too easy for ‘Midnight Special’ to be terrible. Consider this synopsis: a young boy exhibiting otherworldly powers is hunted by the government (who want to weaponise him) and a religious cult (who see him as a shortcut to the rapture); his estranged parents and a small coterie of sympathisers set out on a desperate odyssey to protect him. Now consider the material in the hands of Michael Bay: flashy effects work and soulless violence. Or Neill Blomkamp: grimy effects work and nihilistic violence. Or J.J. Abrams: lens-flare-saturated effects work and sub-Spielberg mawkishness.

Fortunately, ‘Midnight Special’ was written and directed by Jeff Nichols, the man behind 2012’s sublime rites-of-passage genre ‘Mud’, and he brings to the table every plus point of that film: the confidence to foreground character and allow a slow-burn atmosphere to develop in its own good time; an acute sense of place and the ability to demonstrate in visual terms how character and location interact; a nuanced understanding of the fragility of innocence and the terrible things that lurk behind the wonders of an unexplored environment; the complex dynamics of familial relationships; a heartfelt empathy with outsiders; and a facility, as director, to elicit pitch-perfect performances, particularly from younger cast members.

Subject of which, step forward Jaeden Lieberher as Alton Meyer, the young lad at the heart of the story. He gives a performance far beyond his years, utterly convincing through every stage of Alton’s character arc. I could say more, but I want to keep this review devoid of spoilers. ‘Midnight Special’ hasn’t been heavily trailered or advertised and in one respect this is a good thing as it lets the audience discover the film on its own terms, but in another is unfortunate as it will, in all likelihood, come and go from multiplex screens within only a week or two, a small but brilliant film unceremoniously cleared out to free up as many screens as possible for ‘Captain America: Civil War’. Which is why I urge anyone reading these pages to catch ‘Midnight Special’ immediately. Don’t let the opportunity to see it on the big screen slip through your fingers. I am convinced that this film is destined for cult classic – if not outright modern classic – status.

Nichols’ script fleet-footedly dodges every possible cliché or hint of melodrama; what could have been an unholy conflation of ‘Firestarter’, ‘Super 8’ and ‘Red State’ emerges as an uncompromised artistic statement. The narrative begins in media res; a steady accretion of detail fills in backstory, interrelationships and the full context of what’s at stake. Nichols structures much of the first half as a road movie/on-the-run thriller. But without ever sacrificing the finer nuances of his story for the sake of obvious thrilleramics. Which isn’t to say he can’t stage a shockingly sudden shoot-out or a gripping car chase when the moment requires it. Another analogue with ‘Mud’: that film’s final act where the ‘Stand By Me’-style poignancy yields to a scene of joltingly edited bit of gunplay that gets its Peckinpah funk on.

The twin antagonists of ‘Midnight Special’ – state and religion – are obvious targets, but Nichols refuses to trivialise them or score cheap points. The religious cult are treated as stoic types who are convinced they are right, but function as a community in their own right. They aren’t slavering fanatics, demented extremists or lascivious hypocrites; even when they stage their last gasp attempt at kidnapping Alton, force is used sparingly and human doubts are all to evident behind their desperate actions. Likewise, the government/military types emerge as people doing a job instead of jargon-grunting hard-asses.

Every aspect of ‘Midnight Special’ – right up to its gorgeously realised final reel flight of fantasy (a phrase I use as recommendation not pejorative) – is grounded in reality. Its vision of Americana comprises motels, gas stations, small towns and vast swathes of open country. The openness of its road movie elements is in constant counterpoint to the intimacy of its character dynamics and the tense inevitability of what its main characters are fleeing from.

Visually, the film is precise, focused and incredibly well thought-out (its palette of nocturnal landscapes and low-lit interiors gradually cedes – in a way that’s inextricably bound up with the narrative – to the ethereal glow of the magic hour and finally the stark absolute of daylight. Adam Stone’s cinematography is something I want to write a love-letter to. Ditto David Wingo’s score. Acting-wise, I’ve already hailed Lieberher; Michael Shannon, Joel Edgerton, Sam Shepherd and Adam Driver – all damn good actors – deliver effectively restrained performances. Kirsten Dunst is as good as I’ve ever seen her: a late-in-the-game scenes requires her to go from buttoned-down pragmatism to awestruck; and with one piercing look that combines woundedness, stupefaction and something of the transcendental, she pulls off a moment of cinematic alchemy.

In fact, you can apply that description to Nichols as regards his achievement with the film entire. ‘Midnight Special’ is a riveting, enigmatic, thought-provoking and ultimately beautiful work of cinema. It may well be the best American film of the year.
Posted by Neil Fulwood at 9:10 PM