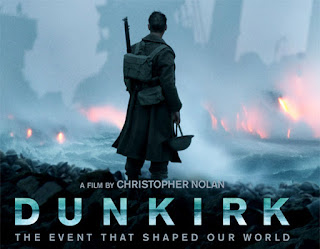 At its best, ‘Dunkirk’ is a tense, immersive and visceral experience that practically screams to be seen on the biggest screen possible. The dogfights are staged so that the vast expanse of sea and sky are abruptly juxtaposed with the claustrophobic interior of the Spitfires. Scenes of men trying to escape torpedoed or dive-bombed ships strive for a Brueghel-like level of hellish intensity.

There is enough in ‘Dunkirk’ that works – and works well – for me to hesitate in calling it a failure or even outright say that I was disappointed. I was perplexed, though, that’s for sure – Nolan makes some aesthetic and narrative decisions that are frankly baffling – and I was more than often frustrated.

Things start interestingly enough with a group of English soldiers, who may have been separated from their unit or may be deserters – sneaking through the narrow streets of Dunkirk, seeing what they can steal from deserted households. German planes are dropping propaganda leaflets, two of which our immediate and ostensible hero Tommy* (Fionn Whitehead) grabs from the air and stuffs down the front of his trousers. Not too much later on, he’ll drop his breeches on the beach to take a shit and the inference is that he’s saved Adolf’s best efforts at demoralisation purely to wipe his arse on. But Nolan, for all that he’s half an hour off gleefully wallow in blood and bashed-in heads and third-degree burns, tiptoes away from Tommy’s required toilet break and even stages the scene such that Tommy might not have answered the call of nature anyway.

Don’t get me wrong here, I’m not suggesting that Nolan should have gone all real-time defecation à la ‘Kings of the Road’, but if you’re starting your movie with an I-wipe-my-arse-on-Hitler’s-propaganda note, then don’t be fucking coy about it. Anyway, Tommy’s possibly postponed poop sees him make the acquaintance of Gibson (Aneurin Barnard) whose name is subsequently revealed not to be Gibson but the script doesn’t give him any other name so I’ll continue calling him Gibson. Tommy and Gibson decide to get off Dunkirk beach by any means necessary, first by impersonating stretcher-bearers (they’re booted off the ship by the medical orderlies), and then by a feigned act of heroism in front of an officer which sees them herded onto the next troopship. Which is promptly torpedoed and they find themselves back on the beach.

Their travails are intercut with the sea crossing of Dawson (Mark Rylance), his son Peter (Tom Glynn-Carney) and their friend George (Barry Keoghan) after the navy requisition Dawson’s pleasure yacht as one of the flotilla of “little ships”; and a dogfight with the Luftwaffe by RAF flyboys Collins (Jack Lowden) and Farrier (Tom Hardy). I use “flyboys” not as a derogatory term but to indicate how the script portrays them. Remember that ‘Family Guy’ episode where Stewie, on trying to join the RAF, is asked what his qualifications are and replies, “I have a British accent, I’m possibly homosexual and my wife’s just awful”? Well, that’s the level of characterisation on display here.

Nolan straight-up tells the audience from the outset that these three points of view occupy temporally different spaces: a week for the scenes on the beach, a day for the “little ships” to make the channel crossing, collect survivors and return; and an hour for the dogfight. He proceeds to intercut between them according to dramatic beats and the rhythms of Hans Zimmer’s score**. And at the cost of any sense of continuity. Granted, when he pulls all three timelines together with the tension ratcheted to the absolute maximum, it’s a genuine coup de theatre and pretty much justifies the ticket price.

The fact that we’re two-thirds plus through the film before he effects this coup de theatre, however, is indicative of the wider problem. As with so much of his work, Nolan approaches the story of Dunkirk as an exercise in non-linear experimentalism and showy imagery. His grasp of character and how men interact in the theatre of conflict is flimsy at best. Peckinpah would have focused on group dynamics and the mindset of the soldier; hell, even David Ayer would have known where to focus the drama. Nolan, to put it bluntly, misses the real story even as he continually stumbles over bits of it.

Case in point: Tommy tries to join a line of soldiers on the beach and is basically told to fuck off (“Grenadiers, mate,” a gruff squaddie says, eyeballing him). The military as a class system in microcosm: a fascinating angle Nolan could have explored, but no – a single throwaway line of dialogue and the theme is never revisited.

Case in point: James D’Arcy’s colonel is appalled by the bland assurances of Kenneth Branagh’s commander and seems, just for a moment, as if he were about to vent anger at the callous idiocy of the top brass back home, but no – the moment passes and he remembers he’s a British officer in a war movie.

Case in point: someone notes that the tide is coming in, another character asks how they know, and the curt response is that the incoming tide washes the dead – those drowned, burned or shot during an earlier (failed) evacuation attempt – ashore. Cut to a column of men, knee deep in the sea, waiting on a ship that might not even fucking exist, pushing away from them said incoming corpses. They do so hesitantly and respectfully but not without some measure of disgust. Or maybe despair.

And I couldn’t help thinking that this is where the real drama was. Imagine being one of those men on the beach. Lined up in columns. A pretence of military discipline enforced even in the aftermath of abject defeat. No certainty of rescue. The Germans pushing ever closer. Stukas strafing the beach. The promise of being on the next ship cruelly mocked by the previous ship erupting in flames then keeling over and being taken by the cold grey waves. This is where the drama is: the hope, the despair, the terror, the horrible sense of inevitability as the whine of a Stuka’s engine cuts across the sky. This is the story Nolan should have told. And yet he takes pains – and teeth-grindingly clichéd and melodramatic pains at that – to keep Tommy and Gibson off the beach. His only real focus on the men on the beach is the opportunity they present to frame a shot. He flips from the OCD delight of constructing purely geometrical images, to the childish delight in flipping over the first domino in an elaborately constructed sequence and chuckling as he watches them fall.

Likewise, the focus on Dawson does real damage to his portrayal of the “little ships”. For eighty solid minutes, you’d swear it was only his pleasure yacht making the channel crossing. Nolan doesn’t show a single other non-naval vessel until the last 15 minutes when a metric fuckton of them suddenly appear out of nowhere and Hans Zimmer loses control of himself on the soundtrack. What should be the key moment is reduced to here-comes-the-cavalry cliché.

What really kills the film, though, is two moments of bilious melodrama – one in a beached fishing boat where Tommy, Gibson and some other deserters basically re-enact that ‘Twilight Zone’ episode about the nuclear shelter but with a fishing boat instead of a nuclear shelter; and one on Dawson’s boat which makes the histrionics of ‘Dead Calm’ look like a piece by August Strindberg. Nolan’s preference for these moments over the genuine human drama of the men waiting on the beach speaks volumes about the film ‘Dunkirk’ could have been.

On a technical level, there’s little to dispute, however the performances are serviceable at best. Branagh squints and delivers his lines with all the engagement of a man who’s wondering when the pub opens. Rylance is dismal, trying for Everyman but forgetting that only the super-rich – whether it’s 1940 or 2017 – own yachts; his line readings are stilted and I’m still trying to figure out what accent he was attempting. Everyone else is basically forgettable. In fact, it says something that Harry fucking Styles is the film and his “performance” is functionally better than Mark Rylance’s!

Then we have the score. If the film itself hangs together at odds in the sum of its parts, weird tonal and aesthetic disconnects jarringly obvious from scene to scene and even within individual scenes, then the score summarises that feeling. I can only describe it as a score of two halves, not that it delineates so neatly in terms of its application throughout the film’s running time. It’s as if two entirely different scores had been commissioned, chopped up, and scattered across the film. The first uses two atonal motifs – one suggesting the inevitability of the tide, the other a thuddingly obvious “ticking clock” motif – and in the second is the kind of let’s-rip-off-Elgar-and-Vaughan-Williams orchestration that wouldn’t be out of place in a Hovis or Warburtons commercial.

But the biggest failing is Nolan’s insistence that the audience’s engagement be entirely based on a handful of cardboard cut-out characters. Dunkirk was an evacuation. The experience was collective. The odds against both soldiers and the pilots of the “little ships” were phenomenal. For all that he fills the film with carefully constructed long shots of beach and sea and columns of men, Nolan fails to communicate any sense of scale.

*Yes, Nolan wrote a script where an English soldier’s name is Tommy. Yes, my reaction was pretty much as you’d imagine.


**I will have more to say about Hans Zimmer before this review is over. It will not be pretty.
Posted by Neil Fulwood at 11:46 PM

If you need your ex-girlfriend or ex-boyfriend to come crawling back to you on their knees (even if they're dating somebody else now) you need to watch this video
right away...

(VIDEO) Text Your Ex Back?

123 movies - The Guardian summed it up like this: "Bloodless, boring and empty: Christopher Nolan's Dunkirk left me cold." This is the most stupid movie I have seen in decades. It starts with the main 'German' actor speaking German with a horrible accent. Non of these actors convinced me of being German, the main actor utters constantly clichés like 'just kill them all'. It follows the old Hollywood pattern of 'the good guys, against the bad guys, and of course in the end the good guys win. The enemy is just mowed down, everyone of them shot from the airplanes. I had to force myself to watch it to the end, and sat there in disbelief how such an unauthentic, stereotypical portrayal of an important part of WW II history can have accumulated so many positive reviews.
See more:
sicario putlocker
all the money in the world putlocker
12 strong full movie 123movies
deadpool full movie online free