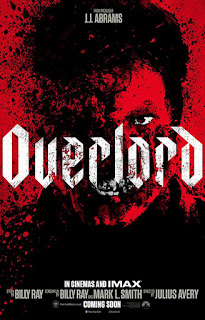 I’m just guessing, but one evening director Julius Avery and screenwriters Billy Ray and Mark L Smith were over at JJ Abrams’s house ingesting hallucinogenic substances in Keith Richards-style quantities when somebody posited that doing one of those big-budget war movies like they did in the Sixties – ‘The Guns of Navarone’, say, or ‘Where Eagles Dare’ – but shot through with the hip insouciance of Tarantino’s ‘Inglourious Basterds’ would be the best thing ever, then someone else had the brass balls to suggest that ‘The Bridge at Remagen’ was a more radical big-budget war movie touchstone than some Alistair MacLean adaptation, at which point there was a fuck-off big punch up and, at some indeterminate moment while a fist was thwacking into a face and a jet of blood was slow-motioning its way toward the flock wallpaper, yet someone else had the deal-sealing idea that what would really tie these elements together was undead super-soldiers. Whereupon the various parties picked themselves up, dusted themselves off and worked out a contract. Then did a fuckton more skag. I rather imagine the script was developed under similar circumstances.

‘Overlord’ is a dumb movie. And when I say dumb, I don’t mean a slightly vacuous or a little bit silly or even the kind of cheesy and utterly nonsensical work that leaves you undecided whether to chuckle or facepalm. No: when I say ‘Overlord’ is a dumb movie, I mean powerfully fucking stupid. It’s also the most entertaining film I’ve seen on the big screen since ‘The Nun’ – and if that isn’t a commentary on how proper cinema needs to get its act together then I don’t know what is.

The plot is almost irrelevant – mismatched grunts; sadistic Nazis; medical experiments; fire fights and fist fights; shitload of things blow up: that pretty much covers it – and the characters ciphers. There’s the Reluctant Hero Who’s Never Killed A Man Before (Jovan Adepo), there’s the Hard Ass Lieutenant For Whom The Mission Is Everything (Wyatt Russell), there’s Wiseass Italian-American Who Never Stops Talking (John Magaro), there’s the Aristocratic But Slightly Rapey Nazi Officer (Pilou Asbæk) and there’s the Plucky French Villager Who Turns Out To Be A Veritable Fucking Badass (Mathilde Ollivier). Everybody else pretty much exists to get mown down in the kind of shoot outs where one of the good guys slams in a clip and twenty minutes later they’re still happily decimating the Third Reich.

As you’d expect, every narrative beat is predictable. Injured antagonist who uses the super-soldier serum on himself? Check. Previously irascible character who risks his life to save cute kid? Check. Unorthodox mission behind enemy lines with the odds stacked at a seemingly insurmountable level? Check. Male bonding under said conditions? Check.

And violence: lots and lots of the old ultraviolence, all of it comic book and cynical as fuck in its amorality? Check, check, checkity check.

‘Overlord’ suffers from a first forty minutes or so that veers from annoying (the extended opening scene that sets up the platoon before their plane gets shot to ribbons and they’re forced to make an earlier-than-expected parachute jump has more in keeping with a Vietnam flick than a WWII movie and the tone grates) to plodding (it takes far longer than it ought to for the survivors to regroup, encounter the Plunky French Villager Who Turns Out To Be A Veritable Fucking Badass and make it to the village). Once everything’s in place, though, the pace picks up, the red stuff starts flying and it’s good unclean fun all the way to the end credits. Subject of which, head for the exit the moment they start: the hugely anachronistic song that plays over them is just fucking horrible. And further evidence that the filmmakers were off their tits on Colombia’s finest.
Posted by Neil Fulwood at 9:07 PM

I missed this one at the theater, so I will be checking it out soon, but your review makes it sound exactly like what I expected from it. Stupid fun, with a budget. Wanna check out while doing some skag, just kidding about that last part. :)

If you're attempting to lose weight then you absolutely have to jump on this totally brand new personalized keto diet.

From their launch in early 2019, 100's of people have already completely transformed their body and well-being with the benefits a smart keto diet can provide.

Speaking of benefits: clicking this link, you'll discover eight scientifically-proven ones given by the keto diet.

After being in relationship with Wilson for seven years,he broke up with me, I did everything possible to bring him back but all was in vain, I wanted him back so much because of the love I have for him, I begged him with everything, I made promises but he refused. I explained my problem to someone online and she suggested that I should contact a spell caster that could help me cast a spell to bring him back but I am the type that don’t believed in spell, I had no choice than to try it, I meant a spell caster called Dr Zuma zuk and I email him, and he told me there was no problem that everything will be okay before three days, that my ex will return to me before three days, he cast the spell and surprisingly in the second day, it was around 4pm. My ex called me, I was so surprised, I answered the call and all he said was that he was so sorry for everything that happened, that he wanted me to return to him, that he loves me so much. I was so happy and went to him, that was how we started living together happily again. Since then, I have made promise that anybody I know that have a relationship problem, I would be of help to such person by referring him or her to the only real and powerful spell caster who helped me with my own problem and who is different from all the fake ones out there. Anybody could need the help of the spell caster, his email: spiritualherbalisthealing@gmail.com or WhatsApp him +15068001647
you can email him if you need his assistance in your relationship or anything. CONTACT HIM NOW FOR SOLUTION TO ALL YOUR PROBLEMS