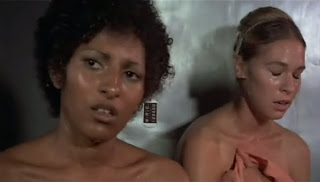 After his Oscar night clean-up with ‘The Silence of the Lambs’, it’s my personal guess that Jonathan Demme quickly redrafted his CV and decided to leave a few things off it. ‘Caged Heat’, for instance, his directorial debut and a key entry in the “women in prison” genre. Or his “story by” credit for ‘Black Mama, White Mama’, Eddie Romero’s scuzzily entertaining slice of grindhouse starring the iconic Pam Grier, the frankly fucking awesome Margaret Markov, and the living legend and cinematic personification of disreputability that is Sid Haig.

Like ‘Caged Heat’, ‘Black Mama, White Mama’ starts off in unapologetic WIP style. Which suggests a common theme in the early stages of Demme’s development as a filmmaker. And I gotta say, ‘Rachel Getting Married’ would have been a lot more fun with a bit of shower block frolicking and a subplot about a lesbian warden with a penchant for jail-bird jail-bait with short skirts and – 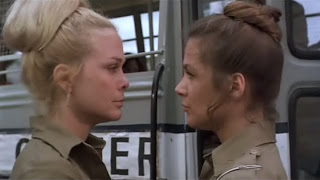 *gets review back on course*

Um. Yes. ‘Black Mama, White Mama’ starts off in unapologetic WIP style, with hooker Leigh (Grier) fetching up at a women’s correctional facility on what I think was somewhere like the Domenican Republic. Either the script doesn’t bother establishing the locale or I was too busy marvelling at the fact that this movie was made thirty-five years ago and Pam Grier is still an absolute knockout. Talk about the thinking movie-buff’s cougar!

Okay. Right. ‘Black Mama, White Mama’ starts off in full-on WIP style with Leigh banged up for soliciting and promptly inviting the unwanted attentions of Matron Densmore (Lynn Borden) – a woman so blonde, so Aryan and so predatory she comes across like a bargain basement Ilsa, She-Wolf of the Whatever. Leigh isn’t too responsive to Logan’s overtures, but fellow prisoner Karen (Markov) cosies up to her. Karen’s our Patty Hearst stand-in for the day, a poor little rich girl currently affiliated with a terrorist group who wear berets and cultivate Che-like facial hair but don’t actually appear to do much of anything for the oppressed underclasses or whomever it is they’re fighting for.

Leigh and Karen don’t get on. A dining hall catfight pretty much sets the tone for their relationship. Things get worse when they’re chained together for transfer to a maximum security prison where Karen is to be questioned about her revolutionary activities. The prison bus is attacked en route by Karen’s comrades, but in the shoot-out Leigh and Karen flee for their lives while the terrorist cell, forced to retreat as reinforcements arrive, get separated from them. 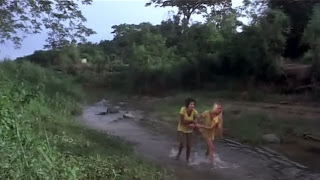 Leigh and Karen, on the run, find themselves not just at odds with the personality clash, but also in terms of which side of the island they want to make a run for. Leigh’s after a suitcase full of cash she appropriated from sleazoid pimp and local crime boss Cheng (Vic Diaz) and a quick passage off the island on a friend’s boat. Karen wants to keep a prearranged rendezvous with her comrades in order to facilitate an arms deal which will allow them to something something liberate something something oppressed masses. Or maybe just Steven Soderbergh to make a two-part film about them. Or something.
In the meantime laconic copper Captain Cruz (Eddie Garcia), under pressure from his grandstanding boss Galindo (Alfonso Carvajal), enters into an uneasy arrangement with pool-playing badass and walking fashion disaster Ruben (Haig) to basically do his dirty work for them. Ruben hits the trail in the most inconspicuous vee-hickle ever driven by a good ole boy. Seriously: Chitty Chitty Bang Bang, the Batmobile and Del Boy’s Reliant Robin look sleek, elegant and sophisticated compared to this dude’s set of wheels. 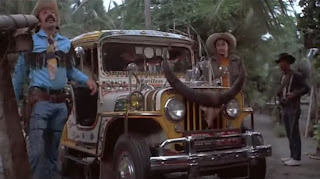 Elsewhere, Cheng – not happy with the whole missing suitcase full of cash scenario – also despatches a bunch of gun-toting heavies with gimlet eyes, cheap suits and limited acting ability to track our heroines down.
If all of this sounds needlessly convoluted for a 90-minute exploitationer, fear not. All these machinations ultimately add up to is four groups of dubious individuals, all with their own agenda, scouring the countryside for Leigh and Karen. Ethnically divided yet chained together. Running for their lives as the bad guys converge on them. In other words, ‘Black Mama, White Mama’ makes a sudden shift, after about 20 minutes, from WIP cheapie to ‘The Defiant Ones’ meets ‘The Getaway’. With hot chicks. Chained together. Who occasionally go at each other in hair-pulling, slapping, scratching girlfight stylee when tempers flare up.
Anyone deleted ‘Rachel Getting Married’ from their Netflix list yet and queued up this one instead?
‘Black Mama, White Mama’ boasts casual violence, gratuitous nudity (most of it completely unerotic), wholesale lines of dialogue that begin and end with the word “bitch”, occasional moments of absurdist humour (our heroines mug a couple of nuns for their habits and, later, kick ass and use bad language while still kitted out as brides of Christ), and more shoot-outs and explosions than you can shake a Sly Stallone comeback vehicle at. It’s populated by low-lifes, scuzz-buckets, pimps and bent cops, all of whom are taken on by tough chicks. It’s low on production values, high on the entertainment factor, unapologetic for being what it is, and has the courage of its convictions to deliver a weirdly poignant downbeat ending entirely apposite to its view of a world where corruption is everywhere and life is cheap.
Posted by Neil Fulwood at 6:23 PM

I honestly do believe this is one of the sleaziest movies I've ever seen (The Candy Snatchers and The Black Gestapo being the only two that leap to mind that are dirtier).

And I wouldn't trade it for anything.