It was after I’d done hammering out 4,000 words on ‘Cannibal Holocaust’ that I realized I’d have to do something pretty special for the grand finale to Winter of Discontent. I was originally going to run this mini-season of sleaze for six weeks (which would have taken me through to mid-December) then return The Agitation of the Mind to some semblance of respectability. Either that, or enter therapy.

But, the disappointments of ‘Rope and Skin’ and ‘The House on Straw Hill’ notwithstanding, I’m enjoying this indulgence of my baser instincts. I’m probably enjoying it way too much.

So I’ve decided to keep going with the sex and the violence, the blood and the gore, and the filth and the fury all the way through to Christmas Eve. And I’ve made a shortlist of possible titles for the last review of our Winter of Discontent. But who will I get down and dirty with on the night before Christmas, when the carol singings are wassailing and Satan Santa (sorry, always get the spelling wrong) is making his rounds?

Will it be Bachelorette #2, ‘Island of Death’. An immoral and reputedly offensive romp of sex, death and dirty deeds done with goats on an idyllic Greek island. She’s a member of the video nasties lists and apparently she likes to keep it in the family.

Will it be Bachelorette #3, ‘The Killer Must Kill Again’. A feisty Italian with a bent for the giallo lifestyle. She’s so stone cold heartless, it’s a crime!

Will it be Bachelorette #4, ‘Last House on the Left’. She knows a lot about drab Swedish existentialist cinema, but you’ll shocked when she reimagines ‘The Virgin Spring’ for the Vietnam generation. To avoid fainting, keep repeating “it’s only Bachelorette #4 …”

Will it be Bachelorette #5, ‘Mountain of the Cannibal God’. With the body of a Bond girl and a ravenous appetite, will this Amazonian terror be Agitation’s dinner date on Christmas Eve?

Or will it be Bachelorette #6, ‘Sex and Fury’. A cross-cultural classic as Sweden’s premiere sex symbol Christina Lindberg, gets mixed up in a typically outrageous Eastern cocktail of nudity, swordplay and pinky violence.

Ladies and gentlemen, the choice is yours.

Here’s the deal. Take a look at this picture: 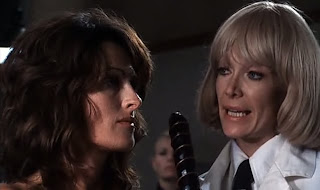 It’s from ‘Ilsa, She Wolf of the SS’ (review tomorrow). Our teutonic titwillow is about to get assertive with her victim du jour. By the way: that cylindrical object entering the frame between them? It’s not the world’s biggest corkscrew.

Your task: come up with a rib-tickling caption. Email it to me at slainte@inbox.com (put “competition” or suchlike in the subject line) with your name and the title of your blog. The closing date is Sunday 19 December. The competition will be judged on Monday 20 December by an informal panel of my friends and the entrant whose caption provokes the loudest and longest laughter will be notified by email. The prize: they get to choose which of these six films I’ll be reviewing for the season finale.

Hello,
Nice blog i like it
Movies pander to our wild senses, titillate our innermost emotions and just pep up our lives. Movies are today just a mini caricature of our real life. In a very big way, the real life has transformed and this is portrayed on the celluloid nowadays