WINTER OF DISCONTENT: Fight for Your Life 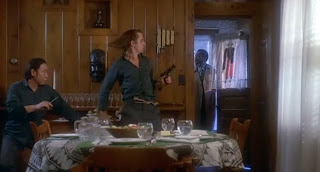 Of the 72 films on the DPP’s hit list that the UK’s slavering, self-righteous, curtain-twitching media were quick to label the “video nasties”, at least 60 have since been released, many uncut. The remaining titles have either been refused certificates or never resubmitted for classification.

‘Fight for Your Life’ holds the dubious distinction of not only being in the still unavailable minority, but incurring the wrath of the BBFC even before the DPP got bureaucratic on its ass. Prior to its brief shelf-life on VHS, ‘Fight for Your Life’ had been denied a theatrical release in the UK.

Essentially, then, we’re talking about a film which ought to be the nastiest of the nasties, an hour and a half of such depravity, violence, gore and filth that to see it but once is to shuck off one’s own humanity and turn into a feral thing ridden with blood lust and unable to comprehend the basics of civilized behaviour and moral responsibility.

Well, folks, I’m here to tell you that I’ve just finished watching ‘Fight for Your Life’ (yeah, I know, “not available in any format in the UK”. What can I say? A little censorship went a lot further in the pre-internet days) and not only have I not been corrupted by this shambolic piece of celluloid, I wasn’t even remotely offended by it. Even though I can’t shake the feeling I should be.

Here’s a brief synopsis: three criminals escape while they’re being transported to jail, steal a car from a pimp, kill a gas station attendant, rob a liquor store, kill the owner, take a customer hostage and hole up at her family’s house. Here, they goad and terrorize the family while the local cops, their jurisdiction shanghaied by a prissy Fed, take their sweet time in following the clues and surrounding the house.

One of the few DPP targets that’s not a stalk ‘n’ slash or outright horror film, ‘Fight for Your Life’ is a boilerplate home invasion flick. As a piece of filmmaking it fails on almost every level. There’s barely a shred of tension. The violence is strictly amateur hour. There’s virtually no gore. The obligatory rape scene occurs for the most part offscreen. The characters are stereotypes. The dialogue is risible to the point of unintentionally hilarious. The editing is perhaps the worst I’ve ever seen: on at least three occasions, the actors are clearly holding their positions as a scene begins. The mechanics of the police investigation (surely the most lethargic manhunt ever) are nonsensical and the climactic siege almost tips into parody. 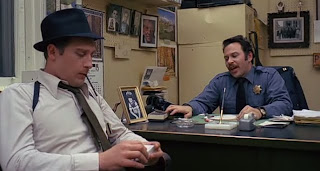 So why the controversy? Well, let’s revisit the above synopsis, get rid of the extraneous details such as the deaths of the gas station attendant and the liquor store owner, and put it this way: three villains led by a white trash racist invade the home of a black preacher and his family. And, yes, what follows pretty much flies in the face of cultural harmony. Within five minutes of said white trash racist, Kane (William Sanderson), encountering said black preacher, Reverend Turner (Robert Judd), I counted fifteen different racial epithets. Later, in what I think is the only instance in cinema of someone getting Bible-whipped, Kane clobbers Turner into unconsciousness with a leather-bound copy of the Good Book. And, uh, rapes his daughter.

All of which is blatantly controversial. And yet … and yet …

The aforementioned racial epithets, once you’ve flinched at the unbelievably casual use of the N-word and the C-word (and I don’t mean the one that gets used a lot in ‘In Bruges’), quickly degenerate into such playground name calling as “booger” and “monkey face”; though used less frequently, there’s more vehemence in, say, the Scorpio killer’s use of racist language in ‘Dirty Harry’. In fact, there’s more wholesale xenophobia in your average ‘Carry On’ film.

Nor are director Robert A. Endelson’s sympathies skewed towards Kane. In fact, he does everything possible to paint Kane as an utter fucktard. Kane is racist across the board, giving his Mexican and Chinese fellow crooks almost as much grief as he does the Turners. He’s a coward, a bully and so despicable that he even draws down on a baby at one point. 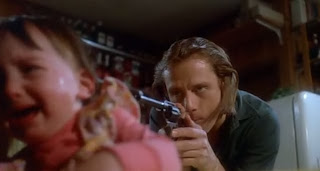 Moreover, it’s implied that he’s got a small penis and developed a taste for, ahem, receiving during his frequent spells in jail. Yup, Kane is reviled and belittled at every turn. Yup, he and his crew deserve everything they get. You can’t even say that the ending is so cathartic that the filmmakers want to have their cake and eat it with as regards their depiction of violence.
However – and this is probably why ‘Fight for Your Life’ is still unavailable in the UK (uh, unless you’ve got a modem, that is) – it’s ultimately a film about a devoutly religious family who unhesitatingly compartmentalize the turn the other cheek/forgive thine enemy bit the moment they get a chance to turn the tables on Kane and co.; a devoutly religious family who perpetuate the siege when they could easily hand the miscreants over to the police just so they can spend a tad longer getting some payback. It’s also about a by-the-book cop – a pillar of rectitude – who in the final scenes makes the biggest u-turn since Tony Blair was in power and stands his men down while the Turners exact their revenge.
All of which would constitute a thorny and provocative examination of those moral grey areas in which la bete humaine lurks just below the surface if the film had been made with any real intelligence or craftsmanship. But it isn’t. Apart from decent performances by Sanderson and Judd, ‘Fight for Your Life’ (its very title a misnomer: Turner doesn’t go mano-a-mano with Kane until the tables have already turned in his favour) is a damp squib. Frequently stupid, intermittently boring and riddled with mismatched cuts, continuity errors, and horribly clichéd transitions (flipped images; wavy lines) that seem to have wandered in from an episode of ‘Scooby Doo’, it’s hard to see how anyone could take this seriously enough to take offence. Unless, of course, the BBFC and the DPP are racist motherfuckers and they can’t get down with the black guy plugging the white guy at the end.
Oh, sorry, that was a spoiler.
Posted by Neil Fulwood at 10:48 PM

I have this on my list of movies to watch this month. Whether I get around to it or not is another story, but until then I will have to skip reading this review. Can't wait to come back and check it out, though. It's great to see you covering some of the Nasties since you'd obviously know more about them and, of course, the BBFC than I do. Especially looking forward to your CANNIBAL HOLOCAUST review!

Hope you get round to reviewing this one. I'd be interested in your take on it.

Neil I don't know if you're taking requests on this thing but I'd love to see you tackle The Candy Snatchers.

It's horrifying, and not in a good way.

After the screening I was having a cigarette when the fellow I was hanging out with turned to me and said "You know there really should be more musical comedies about child rape."

Imagine an X Rated Apple Dumpling Gang, and you're still no were near how wrong that movie is.

So, I'm reading the first sentence of your comment, Bryce, and I'm thinking 'The Candy Snatchers' - sounds like a heist movie at a sweet shop but I have a worrying feeling that it isn't?. Then I read what the guy at the cinema said to you (I'm assuming you moved slowly away from him at that point!) and my suspicions are confirmed.

But "imagine an X Rated Apple Dumpling Gang, and you're still no were near how wrong that movie is" is what really sells it for me.

If I can track this down online, I'll post a review. Then maybe seek therapy.