WINTER OF DISCONTENT: Ilsa, Harem Keeper of the Oil Sheikhs 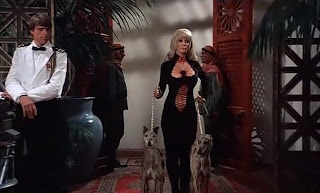 During the exegesis of diplomacy, patriotism and sensitive international relations that typified the Bush administration, it still amazes me that Dubya fumbled the ball so embarrassingly in terms of media awareness vis-à-vis his incursion into Iraq. The portrayal of this god-given mission to safeguard oil supplies democracy as an illegal war could easily have been avoided if only he’d been savvy enough to sponsor a roadshow re-release of ‘Ilsa, Harem Keeper of the Oil Sheikhs’. Ninety minutes of Don Edmonds’s razor-sharp indictment of Middle Eastern barbarianism and even the staunchest liberal would have been baying for towel-head blood.

It’s the mid-1970s and Ilsa (Dyanne Thorne) hasn’t let such minor quibbles as being shot at the end of the first film detract from a success career change. Nor has the passage of 30 years dared to even suggest she might fall prey to the ageing process. No, siree, Ilsa is as blonde and buxom and brutal as ever. She’s now in the pay of Sheikh El-Sherif (Jerry Deloney) and all those skills she learned as a high ranking officer of the SS have set her in good stead. Ilsa is assisted by her lithe and dangerous henchwomen Satin (Tanya Boyd) and Velvet (Marilyn Joi), who are basically a version of Bambi and Thumper from ‘Diamonds Are Forever’ only topless and vibing strong Sapphic undertones. 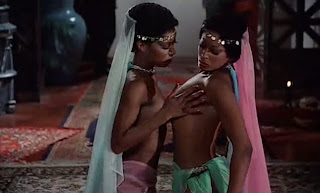 The film opens with the delivery to El-Sherif’s palace of three coffins containing drugged and kidnapped women. Our luckless and soon-to-suffer trio are retail heiress Nora Edward (Colleen Brennan), European starlet Inga Lindstrom (Uschi Digard), and famous equestrian Alina Cordova (Haji). Ilsa begins to train these new arrivals for life in El-Sherif’s harem. Her training technique consists of plentiful lashes of her wagstick, several unspeakable threats should anyone refuse to co-operate, and occasional on-the-job words of advice re: the art of sexual pleasure (sample quotes: “lick, bitch”; “use the tongue – I will not tell you again”).

While Ilsa is busy in this respect – as well as preparing out-of-favour harem girls for public auction – El-Sherif readies himself for a visit from Kaiser (Richard Kennedy), an American diplomat with vested interests in El-Sherif’s oil reserves, while considering the potential threat to himself presented by a sheikh from a neighbouring kingdom. El-Sherif is obsessed with power, as evidenced by the fact that he keeps his prepubescent cousin, the only living claimant to his throne, locked in a dungeon and fed on scraps.

Kaiser flies out from America, in the company of Adam (Max Thayer), a US naval commander with ties to the CIA. During the flight, Adam tells Kaiser that he has a spy in El-Sherif’s camp. Their conversation on the plane is intercut with scenes of Ilsa training Nora, Inga and Alina, Ilsa preparing the slaves to be sold, and the auction itself, the timeline suggestion that in the ’70s it took several days to fly from the US to the Middle East. 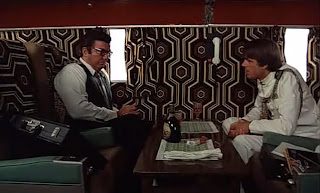 The political intrigue that follows is complicated by Ilsa’s instant attraction to Adam. After some initial pussyfooting around, they soon get down to business. Adam demonstrates a seduction technique to make Valentino jealous: he hacks her dress open with a flick knife and softly murmurs “Spread your legs, Ilsa.” Smooth, Adam; reeeeal smooth.
Meanwhile, Adam’s belly-dancing spy is discovered and persuaded to talk. El-Sherif evinces an oozingly insincere hospitality towards the Americans, all the while planning how best to rid himself of them. Kaiser returns to America, while Adam elects to remain. El-Sherif voices displeasure at Ilsa’s dalliance with him and orders her to kill him. When she prevaricates, El-Sherif exacts a humiliating punishment. Adam, meanwhile, is hauled off the dungeon where he’s locked into a device that suggests Jigaw might have been doing some freelance work in the Arab nations. 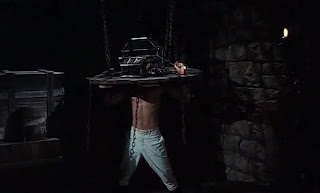 But our plucky square-jawed hero is swiftly rescued by Ilsa (her political affiliations now clarified thanks to a bit of the old in-out-in-out from a good ol’ right-winger) and they ably overthrow El-Sherif’s highly-trained guards with a makeshift army of eunuchs and slave-girls. Apparently, thongs and belly-dancing costumes are appropriate combat gear for the latter. The sheer amount of topless women who get involved in the firefight probably account for why El-Sherif’s men suddenly lose the capacity to aim their guns effectively.
‘Ilsa, Harem Keeper of the Oil Sheikhs’ contains less gore and torture than its predecessor, but its quota of violence against women remains consistent. The most cynical example is the exploding pessary which Ilsa designs, detonation occurring during intercourse. Elsewhere, the loathsome El-Sherif (a pantomime villain of the old school) gets his filthy non-Aryan paws on a succession of white women, while Ilsa is complicit in acts of torture, trafficking and sexual subjugation. Still, good triumphs in the final reel: our former she-wolf gets her come-uppance, El-Sherif gets his, and the Americans get the oil. So that’s all right, then.
Posted by Neil Fulwood at 11:10 PM