WINTER OF DISCONTENT : Cannibal Holocaust (part three: the clue’s in the title) 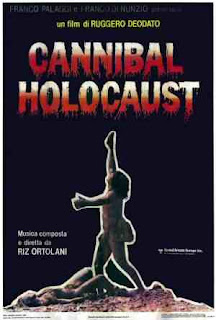 There is a long and sometimes confusing tradition in Italian exploitation movie distribution to random acts of retitling. Therefore, Mario Bava’s ‘Reazione a Catena’ (which roughly translates as “chain of events”) was variously marketed as ‘Blood Bath’, ‘A Bay of Blood’, ‘Ecology of a Crime’, ‘The Antecedent’, ‘Twitch of the Death Nerve’ and ‘Last House on the Left Part II’, this latter being foisted on it for no other discernible reason than to pull in some business on the back of Wes Craven’s grindhouse classic.

Such was not the case with ‘Cannibal Holocaust’. Which is a shame. It would be convenient to make a claim that the English language release resulted in its blatantly provocative title. But unfortunately ‘Cannibal Holocaust’ never started out as, say, ‘Quattro Americani in territorio pericoloso’, leading some dollar-bottom-line obsessed distributor to muse that ‘Four Americans in Dangerous Territory’ was a dead loss on marquees and posters so why not call it ‘Cannibal Holocaust’ instead.

The title is a great snarling “fuck you” to the viewer’s sensibilities before a single frame of jungle has appeared on screen, let alone anyone tucking into a helping of longpig. Let’s break it down into its component parts.

Cannibal as in person that eats human flesh … and let’s face it, alongside sleeping with your sister, getting all Catholic priest over a choirboy or listening to fucking Jedward and Vanilla fucking Ice piss all over the Queen classic ‘Under Pressure’, is there anything more taboo or socially transgressive than going supersize on a McPerson Burger with all the trimmings?

Holocaust as in … Yeah, this is where the controversy starts. Cambridge Online defines holocaust as “a very large amount of destruction, especially by fire or heat, or the killing of very large numbers of people”, but I defy anyone to read or hear the word without thinking of the Nazis and the Final Solution.

Now, this isn’t to say that a film with a blunt title can’t be subtle in its execution (for all I know ‘Sorority Pink’ might be a sensitive coming of age drama and not the Nina Hartley/Porsche Lynn hardcore shagfest that IMDb tells me it is). But, really, when you call your film ‘Cannibal Holocaust’, you’re not really leaving yourself any room to cry foul the moment controversy comes hurtling your way. Quite the opposite: you’re making a statement of intent.

So the question is: does ‘Cannibal Holocaust’ have any merit beyond its already inarguable reputation as one of the most controversial films of all time? 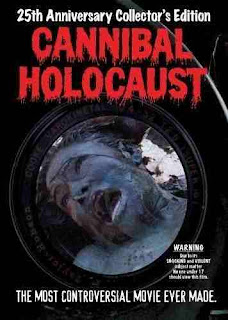 Well, since I’m 400 words into my third fucking article of the week about it, my vote is yes. ‘Cannibal Holocaust’ achieves exactly what Deodato set out to achieve: it blurs the line between supposedly savage and supposedly civilized behaviour; it blurs the line between media and viewer and finds complicity on both sides; and it does these things so persuasively that every frame, every incident, indeed the whole construct of the thing, is designed to have already answered the question Monroe asks in the closing scene. Who are the real savages?

But just because the film achieves its ends, doesn’t mean it isn’t flawed. ‘Cannibal Holocaust’ was always going to be a poisoned chalice. It’s the kind of film that can only prove its point by becoming a victim of its own argument. I said in the first part of this review that Deodato was hoist by his own petard in contractually obliging his cast to disappear from sight. The film likewise: in protesting the media and their role in the proliferation of (and by dint of over-exposure, the cheapening of) horrific images of man’s inhumanity to man, ‘Cannibal Holocaust’ needs must be ugly, repulsive, mean-spirited and provocative.

It succeeds. Too well. It succeeds to the point where its infamy has almost become its raison d’etre. Try finding a DVD copy that doesn’t trumpet how many countries it’s been banned in; how many years it’s been unavailable. It’s become a byword for exploitation. It’s the poster boy for the whole ridiculous video nasties phenomenon. (And isn’t it depressing that a term coined in the early 1980s by something as parochial as the British tabloid press is still part of the film reviewer’s cultural frame of reference?)

But here’s another area where ‘Cannibal Holocaust’ succeeds: it presupposes the “found footage” subgenre which burst unexpectedly into the mainstream with ‘The Blair Witch Project’ and was milked in contrived and shameless fashion in ‘Cloverfield’; which generated real scares in ‘[REC]’ and ‘Paranormal Activity’; and remains the visual and narrative aesthetic du jour for a new generation of low-budget filmmakers.

‘Cannibal Holocaust’ gets under people’s skin for all the wrong reasons. Maybe there will be a time when it gets under their skin for the same reason ‘Blair Witch’ and ‘Paranormal Activity’ did. Or maybe its reputation just casts too big a shadow.

I’m not sure whether Werner Herzog would thank me for name-checking him in a review of ‘Cannibal Holocaust’, but the Bavarian maverick/genius once said “The images that surround us today are worn out … The biggest danger, in my opinion is television because to a certain degree it ruins our vision and makes us very sad and lonesome. Our grandchildren will blame us for not having tossed hand-grenades into TV stations because of commercials. Television kills our imagination and what we end up with are worn-out images because of the inability of too many people to seek out fresh ones.” This sentiment is one of the reasons I revere Herzog. With very few exceptions (‘The Prisoner’ – the original version, not the execrable remake – ‘The Sweeney’, ‘Family Guy’, a handful of other shows) , I fucking hate TV. And I hate with a vengeance the banal, intellectually retarded, aesthetically stillborn culture of reality TV. ‘Big Brother’, ‘The X Factor’, ‘My Super Stuck-Up Sixteen’, ‘I’m a Non-Entity, Get Me Some Publicity’ – vacuous crap, the lot of it.

Take the Agitation test: watch half an hour of advert-riddled, celebrity-smeared TV then stick ‘Cannibal Holocaust’ on and feel it hit you. (As Francisco at The Film Connoisseur put it in a comment on yesterday’s article, “it’s a film that causes a reaction … if the film doesn’t move you, you’re a freaking rock.”) ‘Cannibal Holocaust’ is a hand-grenade from a time before political correctness, infomercials or internet sex tapes. Yes, it’s fucking nasty, but we’re spoon-fed way too much pabulum that’s filtered down through committees to be guaranteed safe and inoffensive; in a world that’s increasingly corporatized and homogenized, I’d like to think that ‘Cannibal Holocaust’ is ready to pounce, rabid and snarling, on a whole new audience. It’s one hell of a wake-up call.
Posted by Neil Fulwood at 6:12 PM

Neil, the paradox of Cannibal Holocaust is that it implicates everyone who watches it while Deodato appears to exonerate himself because he can't possibly be denouncing himself, can he? His own penance came in the courts, to an extent, and that may only be fair. It's a typical Mondo experience; I can't help but hear the filmmakers asking why I want to watch such stuff. Cannibal Holocaust at least raises the question of why anyone films such stuff, but not, of course, in any way that consciously discredits Deodato's own film.

BTW, regarding "Holocaust," my memory is that the word only came to be identified with the "Shoah" in the late 1970s by virtue of Gerald Green's novel and the miniseries it spawned, though I may be misremembering this. That's still late enough, of course, for Deodato to have the international hit in mind when titling his movie.

Cannibal Holocaust is the cinematic equivalent of a rusty faucet dripping into a pile of compost.

Catching up on all the blogs I've been ignoring all week, and I have to say that, taken as a whole, this is one of the finest, most thoughtful attempts to wrestle with Cannibal Holocaust that I've ever read. And I've read way too many of them.

A great series of posts here, Neil. I've always been torn on this film. I'll agree with you -- it is a movie that still can affect the viewer, even if most everyone knows the results going in.

And yet, just the nature of its exploitation roots lends me to be dismissive of Deodato's true motives for making the film. I just can't help but be skeptical of any of these directors feeling truly heartfelt about a cause, instead using that facade as a way to cover themselves when the critics started in on them. Perhaps that's entirely unfair, I don't know.

For those that think this film is the dregs of movie making, I would suggest they watch some of the other cannibal films to see that in can and does get much, much worse than this. Umberto Lenzi's CANNIBAL FEROX was my introduction into the subgenre and boy is that a festering piece of crap.

And now I see you have written about the hicksploitation genre, always a favorite...off to read that.

Sam – you’re right, the term holocaust entered the public consciousness in the late 70s due to the mini-series. Historians and academics had begun to apply the term to the Nazi atrocities since the 60s.

Tim – thanks for your comment. I owe a debt of honour to your Summer of Blood entry on this film, which convinced me it was both possible and necessary to write about ‘Cannibal Holocaust’ as rigorously and objectively as possible. (Though glancing back over the posts, I notice that a fair bit of gallows humour still managed to creep in. As Mrs F has been known to observe, I can be the Emperor of Inappropriate sometimes!)

Troy – at the end of those three posts I’m sure of two things: (i) I’ll always have mixed feelings about this film; (ii) I’ll not watch it again. The segue from cannibalism to rednecks has pointed up some disturbing similarities. Savagery as a way of life; the bayou in place of the jungle; relations with one’s sister in place of flesh-munching. Nice! I think I need to case out a little sexploitation, nunsploitation and Nazisploitation – y’know, just for the laughs.

As always, gentlemen, your comments are appreciated.