WINTER OF DISCONTENT : Cannibal Holocaust (part two: how not to make friends and influence people) 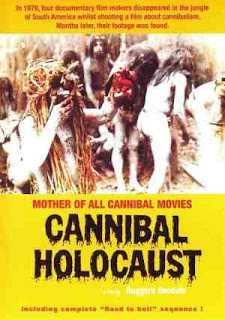 Is there anybody who doesn’t know the basic storyline of ‘Cannibal Holocaust’? I saw it for the first time last week, and yet at any point prior to that I could have given you an accurate synopsis and a fairly inclusive list of the nasty shit that happens.

‘Cannibal Holocaust’ is one of those films you’ve read a thousand articles about in magazines and online, seen grainy clips of, or had the gory details gleefully recounted to you by a friend or colleague who saw it on home video back the 80s just before it got banned. It’s a film you’re weirdly familiar with even if you’ve never seen it. In fact, I’d take a guess that it’s this sense of there being nothing to discover about the film – coupled with its reputation as A-Number 1 gross-out material – that keeps a lot of people from watching it.

In other words, please feel free to skip the next few paragraphs if you think I’m covering old ground.

‘Cannibal Holocaust’ starts with a news report about a team of documentary filmmakers who have gone missing in the Amazonian rainforest. The reporter interviews anthropologist Harold Monroe (Robert Kerman), who is about to join a search party.

In the Amazon, native guides Chaco (Salvatore Basile) and Miguel lead Monroe to a village occupied by the Yacumo tribe. Overcoming initial hostility, they learn that the film crew had passed through en route to an area of jungle notorious as something of a no-man’s-land between the warring Yanomamo and Shamatari tribes, both cannibals*. Following the trail, Chaco and Miguel intercede in a Shamatari attack, resulting in an invitation to the Yanomamo village. Here, Monroe finds a totem made of the missing documentary team’s bones and their (unopened) cans of film. Monroe trades a tape recorder for the film cans and flies back to America.

The TV production company who backed the documentary project are keen to exploit the story and a live interview with Monroe is followed by the announcement that an exclusive documentary will be aired in a week’s time incorporating the recovered footage. Pressured to present the documentary, Monroe insists on working with a team of editors to review the film. One of the editors fills Monroe in on the documentary crew’s modus operandi.

If Monroe is the hero of the film for the first half, let’s meet our villains; we’ll be spending the second half of ‘Cannibal Holocaust’ with them and it ain’t gonna be pretty. We’ve got director Alan Yates (Carl Gabriel Yorke), script consultant (and Alan’s girlfriend) Faye Daniels (Francesca Ciardi) and two cameramen: Jack Anders (Perry Pirkanen) and Mark Tomaso (Luca Barbareschi).

Monroe is warned that Yates was committed to a visceral aesthetic and wasn’t above staging violent incidents to give his documentaries more impact. Monroe interviews colleagues, friends and family of Yates and co. and starts to put together a very dubious picture of them. His suspicions are confirmed when he begins to view the footage. The death of Yates’s guide by snakebite is gloatingly filmed. Every bit of narration that Yates delivers is blatantly insincere. When he encounters the eviscerated remains of a victim of cannibalism, Anders has to remind him to stop smiling because he’s on camera; Yates puts on a serious face and delivers a deeply hypocritical screed about how shocked he is.

Soon enough, the infamous Alan Yates staged footage technique is revealed. Arriving at the Yacumo settlement, Yates, Anders and Tomaso round up a group of tribespeople at gunpoint, herd them into a bamboo hut and set fire to it. Yates’s idea is to pass off the scene as a massacre by the Yanomamo. Monroe and the editing team, already perturbed at what they’ve seen, are sickened by this revelation. Worse is to come: Yates, Anders and Tomaso gang-rape a Yanomamo girl. In one of the film’s most damning moments, Faye’s sole protestation is that they’re wasting film – they’ll never be able to use it in the documentary!

Monroe calls the TV execs in to view the footage. They watch the last reel – depicting the Yanomamos’ violent revenge on Yates, Anders and Tomaso and rape of Faye – after which the head honcho rises shakily from his seat and instructs the technician in the screening room to ensure that the film is burned. As Monroe leaves the studio, he ruminates on who the real savages are. 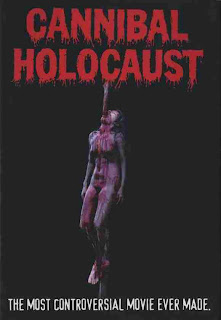 Reading back over that 550 word plot synopsis, I’ve probably sold ‘Cannibal Holocaust’ short in terms of how graphically unpleasant it is. The flesh-eating scenes (which account for surprisingly little screen time) are nowhere near the worst of it. The animal deaths, discussed in yesterday’s post, are much worse. But even then, they’re mostly over with pretty quickly. The snake and the spider are despatched with a couple of machete blows. The monkey’s skull is chopped clean open. The pig is killed with one gunshot. Most of it’s in medium or long shot. The turtle is the only poor bastard creature whose demise is lingered on, and even then it’s not the death that’s protracted but the gutting, cooking and eating of it. Visually, this is probably the worst the film has to offer. This scene is one of the few things in cinema I’ve had to turn my eyes away from (other examples being the coprophilia in ‘Salo, or the 120 Days of Sodom’ and a certain scene which I really don’t want to describe in ‘A Serbian Film’).

I get it: Deodato is showing us the cultural differences by which white men label indigenous tribespeople “savages” before flipping the point of comparison on its head and demonstrating the savagery inherent in the supposedly civilized man. This is why the first half of the film plays out from Monroe’s POV and the second from Yates’s (with plentiful cuts back to Monroe in the editing suite who winces and grimaces and expresses disapprobation on out behalf). I get it. I’d have got it just as effectively, just as powerfully, without three dispiritingly protracted instances of women dragged screaming through the mud and brutalized.

The depiction of rape sums up the film itself. It’s meant to shock, it’s meant to be unpleasant, and it’s meant to inspire feelings of revulsion in the viewer. Deodato’s intention was to address the proliferation of violent images in the media and question the media’s culpability in the dissemination of these images. In his own words:

“There were a lot of terrorist problems in Italy at that time with the Red Brigade – you saw it on TV on the news, along with wars from around the world. Even my son was upset at some of the things on the news. And it inspired me to do a film in the style of journalists at the time. So I did a film about journalists who go to find out what’s going on in the world and then disappear.” (Quoted in a Total Sci-Fi Online interview.)

Which is fair enough, but Deodato wants to have his human remains and eat it. In criticizing the media for their “if it bleeds, it leads” mentality, he plays right into the hands of media moralists who seek to blame violent movies for society’s ills. There’s a fine line between slapping viewers in the face with horrific imagery for the purpose of shocking them out of complacency, and rubbing their noses in it lingering on violent act, one visceral image, after another.

Moreover, Deodato loses any middle ground in which the audience might question where reportage leaves off and moral considerations come into play by doing everything possible to demonize Yates and his team. Yes, I know that Yates’s villainy is kind of the point – his “civilized” savagery shown in counterpoint to the cultural and ritualized “savagery” of the natives – but Deodato doesn’t allow the audience to make up their own minds. Yates and his mates are so outright loathsome that their eventual slaughter by the Yanomamo isn’t so much cathartic as a fucking relief. Simply put, you’re just glad you don’t have to spend any more time in the company of these assholes.

‘Cannibal Holocaust’ is gripping, bloody, often quite artfully made and its impact and notoriety are undeniable. But is it a good film or not? Has its still discernible influence rendered it more important in retrospect? Is there any merit to it? I’ll be trying to marshal my thoughts into some concluding paragraphs tomorrow.

*In actuality, they practise a highly ritualized form of endocannibalism (go here for an in-depth if pretentiously written article on the subject) but are not cannibals in the way Deodato portrays.
Posted by Neil Fulwood at 6:06 PM

I think it is a good film because it's a film that causes a reaction. This is not your regular every day movie watching experience, this is something that will undoubtedly get a reaction from you. If they film doesnt move you, your a freaking rock.

What I loved the most about the movie is the level of realism it achieved. At no moment in the film did I feel like I was watching actors performing as natives. Nope, to me, those natives seemed so freaking genuine, you feel like Deodato pulled a Herzog on us and used real natives, real cannibals.

Same goes for the special effects work. It's simply amazing. How they achieved that level of realism is still a cinematic marvel to me and the film deserves kudos simply for that.

I wish there could have been a making of documentary for this film where we could see these guys eating a sandwich in between takes. Alas...this was the 70's a time before dvd special features...

Great write-up AGAIN, Neil. Sometimes I wonder what Deodato's true intentions were when making the film. How much of it was him making a commentary and using CH to convey a message and how much of it was purely him cashing in on the exploitation craze (remember this was not the first Italian Cannibal movie, which I'm sure you're aware of, and it's also NOT the first "found footage" movie, contrary to what people may believe [the first to utilize this was a Japanese film if I'm not mistaken, the name of which escapes me]). In other words, are we all simply falling for cheap shock tactics (I shouldn't say cheap because it did almost land the dude in prison) or does this film REALLY hold any merit? I still don't really know, but I'm looking forward to what YOU think tomorrow!