A Lizard in a Woman's Skin Made a year before 'Don't Torture a Duckling', Lucio Fulci's 'A Lizard in a Woman's Skin' demonstrates the same straight-to-business facility for striking, provocative imagery in its opening sequence:

Carol (Florinda Bolkan) is traversing the length of a railway carriage, desperately trying to open one compartment door after another; all are locked. The corridor goes from empty but for Carol to jammed with people. Suddenly these others are naked and writhing against each other sexually. Carol tries to force her way through the crush of bodies. Then the carriage is replaced by a long white corridor, like a hospital corridor, still packed with naked bodies. Then Carol is falling. Falling into a dark room with a bed at its centre. A bed draped with garish red silk sheets. A statuesque blonde appears. Inconsistent editing has her sprawled on the bed half naked, then kneeling as if in supplication to Carol, then Carol's on the bed and the blonde is approaching her with an almost predatory look in her eye, her diaphanous robe falling open to reveal her breasts. Then she's easing Carol's fur coat off. Quelle surprise: more nudity! It all gets very sapphic at this point, before a rapid series of edits reveal the whole thing as a dream sequence, Carol awaking in a state of part arousal, part agitation. 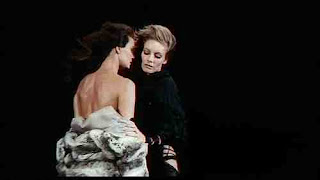 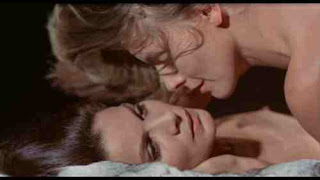 A session with her analyst identifies the blonde as Carol's neighbour, Julia (Anita Strindberg), a free spirit known for her rowdy parties and promiscuous behaviour. Later, when Carol reports a dream wherein she kills Julia (Fulci direction heavily sexualises the violence), the shrink congratulates her on a highly liberating expression of her subconscious. But before a successful conclusion to the therapy can be celebrated, the police are on the scene and interested in what Carol might know about Julia's murder. Which - wouldn'tcha know it? - was perpetrated exactly as in Carol's dream.
Carol's family - her politically connected QC father (Leo Genn), adulterous husband Frank (Jean Sorel) and stepdaughter Joan (Ely Galleani) - rally around her (in as much as walking on eggshells, avoiding the issue and evincing a slightly embarrassed denial at her deteriorating mental state can be deemed rallying around) - while Inspector Corvin (Stanley Baker) determines to get at the truth no matter that it brings him into conflict with his boss, a career cop hesitant at antagonising someone as well connected as Carol's father, or puts him at odds with his colleagues. There's a 'Sweeney'-like scene where Corvin deals with a subordinate who's fucked up. "You," he tells the underling with contemptuous relish, "will enjoy working in archives."
'A Lizard in a Woman's Skin' conflates two highly familiar concepts: the person who foretells a murder but is powerless to prevent it and the innocent accused, to whom all evidence points, who must fight to clear their name. Bizarre symbols and fragments of images which may or may not contain the key to solving the mystery are also present; very much a staple of the giallo. The genre's earliest and most defining proponents - Mario Bava's 'The Girl Who Knew Too Much', Dario Argento's 'The Bird with the Crystal Plumage' - are shot through with an indebtedness to Hitchcock, and there's definitely something Hitchcockian about the innocent accused aspect of 'A Lizard in a Woman's Skin'. But it's hard to imagine even such an accomplished rug-puller as Hitch coming up with as trippy and twisted a mind-fuck as this. 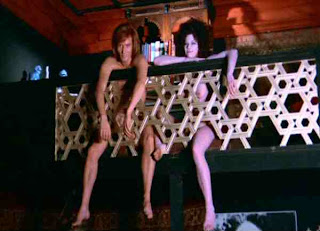 Everything about the film disorientates: whip pans, jump cuts, sudden flashes of light, abrupt juxtapositions (sometimes in split screen), off-kilter compositions; restless, roving, weirdly subjective camerawork; arrhythmic editing. The assault on the viewer's senses carries through to the aural: storms and traffic noise blast out far louder than the dialogue; Corvin's tuneless whistling sussurates through entire scenes; Ennio Morricone's score is just plain schizophrenic. Everything disorientates, even the geography: 'A Lizard in a Woman's Skin' takes place in a version of London where the map has been folded and compressed and the Underground has presumably been replaced with wormholes, where the Old Bailey is right across the street from the Royal Albert Hall.
Images from Carol's dream spill over into her life. A letter opener disappears from her room and turns up at the murder scene. A blackmail plot has something to do with it. A couple of drug addicts turn up at periodic intervals, graduating from lurking mysteriously in the background to actively terrorising Carol. The narrative unfolds with the fragmentary, vividly illogical delirium of a dream, particularly in a sequence where the by now nervously afflicted Carol, "resting" at a convalescents' home, is menaced by a cloaked figure. Fleeing to the upper storeys, the building seems to take on unrealistically expansive dimensions as Carol hurtles along a maze of featureless corridors which seem to carry over from her original dream. Doors leading off them are locked. Finally - in a room that resembles a morgue - she is assailed by an hallucination of three vivisected dogs, connected and kept alive by a series of tubes pumping blood into their exposed hearts.
It's a nightmarish image, a slap in the face that stays with you on a squirmly subconscious level even though you wish you could get it out of your mind. It makes the crucifix masturbation scene in 'The Exorcist' look like 'Jackanory' and makes you wonder why Fulci continues to be remembered/reviled for the splinter-into-the-eyeball bit in 'Zombie Flesh Eaters'. You wanna see the most disturbing, fucked up shit that ol' Lucio was capable of putting on screen? Right here, buddy. (It also landed Fulci in court in Italy, where he was obliged to present the special effects model as proof that he didn't actually butcher a trio of dogs in order to get the shot.)
Fulci's genius in 'A Lizard in a Woman's Skin' - and I'm struggling while writing to decide whether this or 'Don't Torture a Duckling' marks his high point as a film-maker - is to plunge the viewer, from the outset, into the perceptional disconnections of a mind psychologically deconstructing. A chase through a bizarre compendium of locations ends with the beleagured Carol attacked by bats. Until the police intervene and her attacker is identified, there's no telling how much of what we've just seen is in her mind. Fulci establishes a mood of uncertainty from the outset and maintains it till the very last scene when all the pieces are put in place with an understatement atypical in gialli. Too, he breaks the mold by eschewing the bumbling inefficiency and comic relief that usually characterises the procedure aspects of gialli. Here, Baker portrays Corvin as an introspective and bloody-minded copper who actually conducts forensic and evidence-based detective and moreover, in the closing scene, solves the case. 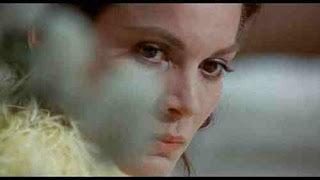 Baker's performance is good, Sorel's and Genn's by the numbers; Galleani sashays short-skirtedly through a nothing role, while Strindberg is given little to do but radiate dangerous allure (such was her lot, generally speaking, in gialli). It's Bolkan to whom the acting honours are due. Carol is multi-layered, emotionally exhausting role and Bolkan gives it all she's got - a full-throttle, all or nothing performance which should have netted her a mantlepiece full of awards. But 'A Lizard in a Woman's Skin' is a giallo and the kind of critics who think they know more than people who generally love film have it that gialli are pulp movies and devoid of artistic legitimacy.
Which is why I'm a movie lover and not a critic.
Posted by Neil Fulwood at 11:18 AM

Good analysis of a movie I pretty much skimmed over. I'm more of a fan of Fulci's horror movies than his "psychosexual" thrillers, but after reading your post I feel like I gave "Lizard's Skin" short shrift. Thanks for posting this!

Goodness, Neil: I've had a copy of Lizard sitting on my shelf for months now, and you have me kicking myself for not checking it out sooner. Thanks for a great review that's moved it close to the top of my to-do list.

I must confess that 'Lizard' wasn't a film I engaged with that enthusiastically first time I saw it. Reviewing 'Don't Torture a Duckling' for the blog-a-thon prompted me to re-assess it and I was amazed at how much I got out of the film second time around.

I just watched this one earlier and remembered that you had reviewed this one last month, so I thought I'd stop by and check it out! As always, great review, BUT... I must have seen a cut version of this or something, because I did not see this dog scene that you mentioned. Sounds pretty cool, though!