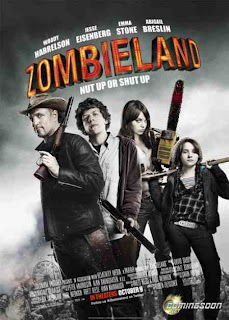 I sometimes think my wife should work for ‘Sight and Sound’. The result would be shorter and significantly less pretentious reviews. For example: as the end credits rolled on ‘Zombieland’, she remarked, “There was no point whatsoever to that film.”

Does that sound harsh? She wasn’t dissing ‘Zombieland’. In fact we’d both laughed uproariously through most of its brief 81-minute running time. But it’s an accurate point. As much as any zombie movie can be said to have a point beyond “group of (generally mismatched) survivors hole up against the undead and try to stay alive”, ‘Zombieland’ is singularly lacking in narrative, structure or character motivation.

And that’s kind of what makes it fun.

Most zombie movies lock themselves into a restricted locale scenario. A farmhouse, a shopping mall, an underground military installation or – in the quintessentially British spin ‘Shaun of the Dead’ puts on things – one’s local pub. ‘Zombieland’ thumbs its nose at convention and sets itself up as a zombie-ridden road movie. True, the genre has come close to (pardon the pun) going down this road before: ’28 Days Later’ and ‘Diary of the Dead’ permit their protagonists to be more mobile than is the norm. But for my money, ‘Zombieland’ is the first zombie movie that captures the authentic freewheeling aesthetic of a road movie. 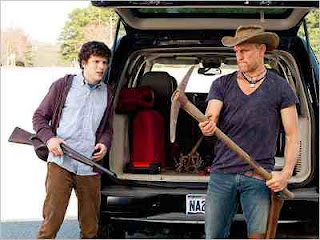 Hell, the very first scene (following an hysterical slo-mo credits sequence that sets up urban America as a hotbed of zombie activity) has slacker-turned-survivalist Columbus (Jesse Eisenberg) fending off a trio of flesh-munchers as he tries to fill his car up at a seemingly deserted gas station. Later, leaving the city sans automobile, he hitches a lift with Tallahassee (Woody Harrelson), a man who blames the zombie infestation for creating a world which is becoming increasingly devoid of Twinkies. Later, the pair of them encounter teenage sisters Wichita (Emma Stone) and Little Rock (Abigail Breslin) and some cat-and-mouse shenanigans ensue around who can claim ownership of Tallahassee’s pick-up truck.

Essentially, the foursome (a relationship based on mutual distrust gradually thawing to something that just about passes for comradeship) travel across America. They kill some zombies en route. They kill a fuckload more at the end of the journey. That’s about your lot. Motivations are basic: Columbus wants to get back to his home town to see if his parents are alive (pretty early into the film it’s suggested they won’t be); Wichita wants to protect her younger sister at all costs; Tallahassee just wants a Twinkie. It says something about characterisation when the protagonists are named after the towns of their birth. 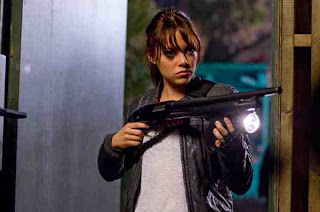 Equally gimmicky is the frequently updated set of rules Columbus abides by, ranging from never trusting restrooms (you’re sat on the can, trousers round your ankles, at your most vulnerable; zombie crawls under the door, chomp, game over) to cardiac considerations (outrunning a zombie is only effective if you’re fit; fat people needn’t worry about being eaten – a massive coronary will bet them first). Every time Columbus invokes one of the rules, a flashback accompanies it while the rule itself floats across the screen in ‘Panic Room’-style lettering. It’s contrived, but utterly effective.
Midway through, however, we get the Mystery Guest (I’ll leave their identity under wraps just in case you’ve been on Mars or in solitary confinement for the last couple of years) and the film’s sometimes-cute-sometimes-acerbic humour suddenly gets weighted down. It’s a joke too far. ‘Zombieland’ becomes top-heavy as a result of it, particularly when scripters Rhett Reese and Paul Wernick quickly have to rid themselves of said Mystery Guest in order to get things (quite literally) back on course again. The way they write him out is painfully obvious from the get-go.
Equally problematic is the funland finale. While an inspired location for a horror movie (see also Paco Plaza’s ‘A Christmas Tale’), the mechanics of the denouement require the hitherto more-than-capable Wichita and Little Rock to do two fairly stupid things in quick succession just so the boys can show up in eleventh-hour fashion and rescue them.
Minor complaints, I guess, when the film is so gut-busting funny the rest of the time, but still annoying when Reese and Werbick and director Ruben Fleischer gleefully disregard narrative conventions for much of the running time only to embrace the rustiest and creakiest of plot mechanics at the last hurdle.
Posted by Neil Fulwood at 11:52 PM

Unsurprisingly, I felt the same way, Neil. I have to admit also that I found the majority of it extremely funny. There's a real sense of geniuneness to the story and the characters, and it goes a long way. Not a film that I'm too keen to revisit but certainly will watch it again if flipping through the channels. Great review and excellent work, as always.

True, devoid of any depth, but damn was it fun to watch! For another zombie film that ends in an amusement park check out Nightmare City, its a fun/dumb Italian zombie flick!

Still the mystery guest was worth it. If only so future historians will know he really didn't mean Garfield.

Hans - agreed: the characters and the atmosphere make the film. It's one I was glad I'd rented; like you, I'd happily watch it again when it crops up on TV but it doesn't have that repeated viewing vibe that makes it an essential DVD purchase.

Francisco - thanks for the 'Nightmare City' recommendation. Not one I've seen, so I'll certainly make a point of tracking it down.

Bryce - although the mystery gue-- ... oh, fuck it, Bill ... acquits himself very well and his section of the film isn't without merit, it's the clumsy way he was written both in and out that didn't work for me. But wouldn't it have been fun to watch a zombie Garfield get what was coming?

True. And for the record I agree with you. It feels like the film never quite finds its footing afterwards.