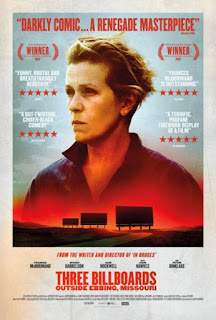 Having already chalked up an impressive career as a playwright, Martin McDonagh made his directorial debut in 2006 with Oscar-winning short film ‘Six Shooter’, the promise of which he made good on in memorable style with ‘In Bruges’ in 2009. His sophomore feature film ‘Seven Psychopaths’ opened to mixed reviews in 2013 – admission: never seen it – and, after another four year gap, he returns with ‘Three Billboards Outside Ebbing, Missouri’.

Now, I fucking bloody loved ‘In Bruges’ (Agitation review here) and consider it a pitch perfect black comedy. But here’s the thing: watch the deleted scenes on the DVD and it comes abundantly clear that had they made the final cut, ‘In Bruges’ wouldn’t have been anywhere near pitch perfect. It would, tonally, have been all over the fucking place.

My guess is that either: (a) McDonagh had an on-the-ball producer on ‘In Bruges’ who knew exactly what did and didn’t work and instructed him to make cuts accordingly, or (b) unanimous test audience responses led to the same outcome.

I can’t claim that ‘Seven Psychopaths’ bolsters or diminishes the observation, not having seen it, but I would hazard a guess that no-one was around on ‘Three Billboards’ to bring to McDonagh’s attention the film’s really jarring tonal shifts. A blander, more boilerplate piece of work might have been sunk by them, but fortunately ‘Three Billboards’ has a hell of a lot to commend it despite its flaws.

The victim of this heinous crime is Angela Hayes (Kathryn Newton). Seven months have passed since the atrocity and the local police department have given up on the case. Angela’s mother Mildred (Frances McDormand) responds by renting three billboards on the backwoods road where Angela was assaulted and killed – she raises the money by selling off a tractor/trailer belonging to her ex-husband Charlie (John Hawkes), currently shacked up with his 19-year-old girlfriend Penelope (Samara Weaving) – and uses them to unsolved-crime-shame Ebbing sheriff Chief Willoughby (a never-better Woody Harrelson).

To put it mildly, Mildred stirs some shit. Or to put it another way, Mildred tears the bandage off Ebbing’s festering wound. Or to be it another way, if Lisbeth Salander in the novels by Stieg Larsson is the girl who kicked the hornets’ nest, then Mildred is the woman who smacked the hornets’ nest down to the ground, doused it in petrol, tossed a firecracker at it and shouted “yeah, bitch” as it went up in flames.

Mildred’s provocation has its most immediate effect on Willoughby, a man who has admitted that there’s little more he can do as regards Angela’s murder, and is also somewhat distracted by the requirements of setting his affairs in order on account of the fact that he’s dying of cancer. His terminal condition has an understandable knock-on effect on his younger wife Anne (Abbie Cornish: her best turn since ‘Bright Star’) and their two children.

Willoughby’s terminal condition doesn’t do much, either, for the equilibrium of his alcoholic short-fuse deputy Dixon (Sam Rockwell), a man-child in thrall to his obnoxiously racist mother. Unable to vent his frustrations elsewhere, Dixon targets local entrepreneur Red Welby (Caleb Landry Jones), owner of the advertising company who lease Mildred the billboards. In the broadest of strokes – broad to the point of cliché – McDonagh’s script establishes Dixon as the villain of the piece, as stupid as he is dangerous, only to flip everything on its head.

At any one time, and sometimes with the two or three minute passage of one single scene, ‘Three Billboards’ functions as a black comedy, a procedural, a melodrama, a cautionary tale as regards the exponential consequences of wrong things done for the right reason (airhead Penelope’s “anger begets anger” scene is both laugh-out-loud funny and the intellectual cornerstone of the movie), and an enquiry into the nature of responsibility, forgiveness and atonement.

Atonement is where the film scores its most palpable hits – far more effectively than McDonagh’s brother’s recent outing ‘Calvary’, which attempts a similar enquiry – with scenes between Dixon and Red, and Dixon and Mildred, communicating far more than the understated sketches that McDonagh is wise enough to be satisfied with rather than making some sweeping moral statement.

It’s not exactly front page news to declare than understatement, inference and ambiguity communicate the big themes more effectively than tub-thumping or polemics. But it’s surprising how many artists, of whatever discipline, still haven’t twigged to this. McDonagh fumbles the ball in enough places that an overall less interesting film wouldn’t have survived the uneven tonal shifts, the hackneyed characterisations and the bludgeoningly obvious narrative tropes.

That ‘Three Billboards’ just about dodges its myriad self-fired bullets owes to a first-rate cast who invest in their characters to the hilt, and to McDormand in particular who effortlessly clears the twenty-year hurdle of her achievement in ‘Fargo’ to deliver her definitive performance and bring to life a character for the ages.
Posted by Neil Fulwood at 11:31 PM