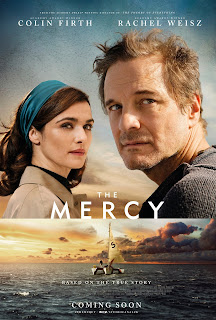 So: over a month after I saw ‘The Mercy’ at a vastly under-attended screening at Nottingham’s Cineworld multiplex – during which I have watched several other Crowhurst features, ploughed through two-thirds of Peter Nichols’s book ‘A Voyage for Madmen’, added Tomalin and Hall’s ‘The Strange Last Voyage of Donald Crowhurst’ and Bernard Moitessier’s ‘The Long Way’ to my “must read” list, and cursed StudioCanal for not getting Simon Rumley’s ‘Crowhurst’ into theatres four to six weeks after ‘The Mercy’ as they promised – I find myself sitting down to write about ‘The Mercy’ and feeling like I’m about to be a bit of a heel.

I had sod all knowledge of Donald Crowhurst, Bernard Moitessier and the 1968 Golden Globe race before I saw ‘The Mercy’. I went to see it because of its stars – Colin Firth and the always watchable Rachel Weisz – and because it looked like something reasonably interesting amidst an otherwise lacklustre choice of cinema-going options. What ‘The Mercy’ did was to sink a hook in my imagination and pull the line attached to it taut as a piano wire. It made me want to know more. Not just about Crowhurst but the other contestants. Once payday has rolled around again and I can order a copy of Moitessier’s account and the Tomalin/Hall book, my next acquisitions will be Donald Finkel’s book-length poem ‘The Wake of the Electron’ and Robin Knox-Johnston’s memoir ‘A World of My Own’.

This from someone who never had any real interest in ocean voyages or yachtsmanship. And it’s thanks to ‘The Mercy’ that I owe this explosion of new-found fascination.

And yet – I was aware of this to a certain degree as I watched the film, and it’s been thrown into sharper relief by my viewing, reading and researches since – ‘The Mercy’ isn’t that great a movie. It’s decent, don’t get me wrong – nicely shot, good production values, a commendably taut hour forty minute running time, and Firth’s most committed performance in ages – but it falls short of greatness.

It falls short because, in some places, it elides fascinating details of Crowhurst and the Teignmouth Electron’s voyage that would have added to the drama; and in others it sanitises them. Example of the former: ‘The Mercy’ insinuates that the Teignmouth Electron was delivered to Crowhurst at the very eleventh hour, allowing him to set out on the very day of the deadline – 31 October 1968 – when in fact the vessel was launched in late September with the intention that Crowhurst would sail it from Brundall to Teignmouth (the Electron had been named after the harbour town as part of Rodney Hallworth’s publicity drive), a voyage that should have been a three day hop for any competent sailor but took Crowhurst a fortnight. Much, too, is made in the film of Crowhurst’s self-designed safety devices, particularly the “buoyancy bag”, and a genuinely vertiginous scene has a petrified Crowhurst (Firth) climbing a wobbling mast in order to effect a repair only to fail in his endeavours. In actuality, none of the safety features had been completed and/or installed before the Electron set sail, and it strikes me that for the film to have reflected this would have ramped up the tension from the get-go.

Examples of director James Marsh and writer Scott Z. Burns’s sanitisation are more prolific and more troubling. One needs only to consult two or three accounts of the Crowhurst story to identify Stanley Best and Rodney Hallworth as the puppet-masters who manoeuvred Crowhurst into his damned-if-I-do-damned-if-I-don’t dilemma. Yet Marsh and Burns almost seem to take pains to paint Best as a kindly old cove (he’s played by Ken Stott, who can do ruthless as well as any character actor, so we have to assume that the twinkly characterisation he delivers instead was specifically requested) who does what he does with the greatest of reluctance. Likewise, Hallworth (David Thewlis) comes across as a cheeky chappie who gratuitously embellishes Crowhurst’s claims because, hey folks, that’s what fast-talking 1960s newspaper were like, innit? Thewlis had already turned in a far more nuanced portrayal of a journalist in ‘The Fifth Estate’ so there’s no reason to doubt that, had Burns written Hallworth as such and Marsh requested it, Thewlis would have embodied the character and projected his motives in suitably eviscerating style.

Similarly, Crowhurst’s descent into madness is skirted around rather than providing the dramatic raw red meat of the film’s final act. Neither Marsh nor Burns seem to be up to the task of depicting their protagonist’s fragmenting mental state. A visual attempt to render Crowhurst’s disorientation against a seascape that renders him insignificant isn’t well enough thought-out to be impactful, and a sequence with a non-functional radio-telephone, which seems to have been shoehorned in purely to make mention of Crowhurst’s “cosmic being theory” (but without actually explicating it), is so predictable in its visual punchline to be crass.

Put simply, ‘The Mercy’ doesn’t go deep or dark enough. Its last half hour needs to be the kind of claustrophobic and immersive headfuck that Nic Roeg, Donald Cammell, David Lynch or Alejandro Jodorowsky would have rubbed their hands together and dived right into. But I guess that headfuck-inability is what you get when you engage the director of ‘The Theory of Everything’ instead of a visionary auteur.

Mercifully (bad pun: no apologies), the film does get some things right. It gives Firth one of the best roles he’s had and – despite being at least 15 years too old to play Crowhurst – he rises above the limitations of the script and direction. As does Rachel Weisz as Clare Crowhurst, whose final act j’accuse against the press is infinitely more powerful for the reserve and restraint she forces on herself as she delivers it. There are also a cluster of scenes which simply document Crowhurst, alone at sea, coming painfully to terms with how ill-prepared he is, how unsuited to purpose the Electron is, and how miserably lonely the undertaking. I often complain that contemporary films would benefit from having their running times reduced by 15 or 20 minutes, but in this case and extra quarter of an hour or so of Crowhurst battling to keep his trimaran afloat, battling his own lack of expertise and battling the crippling external forces by which he is unable to either turn back or go on, would have improved ‘The Mercy’ no end. That, and the balls to look right into the abyss the way Crowhurst must have done during those terrible final days.
Posted by Neil Fulwood at 11:05 PM

Thank you for information, We invite you to visit our website for your cappadocia travel plans.turkey cappadocia tours