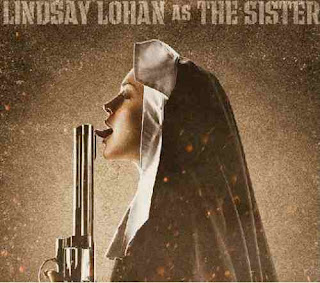 This from some online celeb sheet:

"Just weeks away from completing her court-ordered stay at the Betty Ford Center, Lindsay Lohan is being investigated by police after allegedly assaulting a female employee at the clinic.

Palm Desert police conducted a battery investigation at the scene at about 1 a.m. on Dec. 12. "The victim desired prosecution," says Sgt. Joe Borja of the Riverside County Sheriff's Department. "The incident is being investigated as a misdemeanor."

A source close to Lohan, 24, says the actress denies pushing the woman first. The staffer scolded Lohan for allegedly returning past curfew after spending the evening at a local bar, TMZ reports.

It isn't known whether she had been drinking; the Betty Ford Center regularly tests patients for alcohol and drugs."

1. During a "court-ordered stay at the Betty Ford Center", she spends the evening at a local bar. This is kind of like saying someone going cold turkey hung out backstage with Keith Richards for a while.

2. The writer of the article reports that Lindsay Lohan - Lindsay fuckin' Lohan - spent an evening at a bar, then adds "it isn't known whether she had been drinking". This is kind of like saying Casanova kept the company of several women during the course of an evening but it isn't know whether intercourse took place.

3. Her gun-toting, nun-impersonating, coked-up, hot-tub-occupying socialite from 'Machete' needs her own spin-off movie.

Lindsay: in a Pepsi-and-pizza generation of cardboard cut out, non-threatening, toothpaste commercial non-entity pin-ups like Zac Efron, Robert Pattison and Vanessa Hudgens (the only woman to be at the centre of a topless photos on the internet furore and still emerge as puke-makingly wholesome), you're the magnificent, unapologetic, boozing, brawling, controversy-magnet exception to the rule.

In bad behaviour heaven, Oliver Reed, Richard Harris and Richard Burton are raising a glass to you. Here at chez Agitation, I'm doing exactly the same.
Posted by Neil Fulwood at 11:35 PM

You are right, I'm afraid.

Wow, she doesnt want this part of her life to ever end, she just keeps digging herself deeper in the shit!

The great thing about Lindsay Lohan is that she just doesn't seem to give a shit. You can't imagine Natalie Portman, Anna Paquin or Emma Stone going off the deep end like this, and even Kirsten Dunst's spell in rehab was low-key and she got herself together pretty quickly. Lohan seems to bounce from one headline to the next, becoming more and more uninsurable and it makes you wonder if she'll ever land another movie role. Apparently her supposed comeback in the Linda Lovelace biopic isn't going to happen because of insurance projects. Damn shame. Would have been fantastic casting: LL as LL.