WINTER OF DISCONTENT: Emanuelle and the Cannibalistic White Slave Traders in Prison with the Queen of Sados 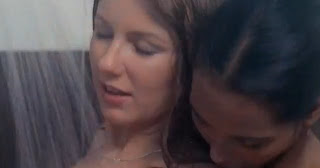 Just for the sake of closure, here’s a brief overview of the Black Emanuelle films I was going to review individually, over the next four days, as part of this misbegotten offshoot of Winter of Discontent.

The content of this piece is based on only half-watching most of these films while doing other things (ironing shirts has never been so welcome a distraction) and skipping large chunks of them when the will to live became too depleted.

‘Emanuelle and the Last Cannibals’ – in which our intrepid heroine sets out to prove or disprove the existence of a cannibal tribe. A true investigative journalist to the end, she employs the age old method of shagging everyone in sight. The cannibals, she discovers, exist. A better title for this scabrous piece of filmmaking would be ‘Cannibal Pornocaust’. The atrocities on display include rape (natch), disembowelment, cruelty to animals, castration and rampant flesh-munching (the part of the anatomy the cannibals seem to favour just makes the whole thing that bit nastier). On the plus side, Nieves Navarro co-stars (under her Susan Scott pseudonym) and not to put too fine a point on it, the woman’s hotter than hell on a day when all the furnaces were turned up to the max and the devil’s attitude was fuck the gas bill.

‘Emanuelle and the White Slave Trade’ – in which our shag-happy heroine uncovers a … well, the clue’s in the title. Again, Emanuelle uncovers the story by the simple expedient of uncovering her lithe and luscious form. There’s voyeurism, masturbation, lesbian action, threesomes and – yup – rape. Brownie points for (a) being pretty much the only Black Emanuelle film to have an actual narrative arc (honest!) and (b) co-starring the achingly gorgeous Ely Galleani. Here, Galleani seems to be playing the character originally essayed by Karin Schubert in ‘Black Emanuelle’ and not the American tourist she played in ‘Emanuelle in Bangkok’. Not that the confusion matters when you’ve got a Laura Gemser/Ely Galleani shower scene to feast your eyes on.

‘Emanuelle: Queen of Sados’ – in which Emanuelle’s most perplexing assignment is trying to pin down what the original title of this movie actually was, because I’m damned if it was a bona fide Black Emanuelle flick to begin with. I rather think dubbing and retitling played their part (in some scenes the character’s clearly referred to as “Emanuella”). It’s also known as ‘Emanuelle’s Sweet Revenge’, ‘Emanuelle’s Daughter’ and ‘Emanuelle, Queen Bitch’, the first two of which are – respectively – slightly inaccurate and totally inaccurate, while the third is just plain harsh. ‘Emanuelle’s Stepdaughter’ would be more accurate, but I guess that wouldn’t sell as many tickets. Anyway, Emanuelle is apparently now married (which is why I suspect it was never a canon Emanuelle title; our heroine’s only lasting relationship is her job) and her husband an abusive prick. Emanuelle convinces some random guy (guess how?) to do away with her husband. A plane crash does the job for him. Emanuelle inherits his holiday home in the Greek islands and is appointed ward to his daughter Livia (Livia Russo). I’ve been unable to find out how old Russo was at the time of shooting, but she looks awfully young. If the lass was over 17, I’d be surprised. Although nowhere near as offensive as ‘~ in America’ or ‘~ and the Last Cannibals’, ‘~ Queen of Sados’ (no, it’s not a real Greek island) makes for a very uneasy watch when you have reason to suspect that a minor was exploited.

‘Emanuelle in Prison’ – in which the title is helpfully shortened from ‘Emanuelle Reports from a Women’s Prison (which is itself an Emanuelle-ization of the indigenous ‘Violenza in un carcere femminile’) and is sometimes used as a title for, and therefore confused with, ‘Emanuelle Escapes from Hell’ (‘Emanuelle fuga dall'inferno’). Our hump-happy heroine poses as an inmate to get the skinny on corrupt officials mistreating prisoners. Merrily hopping from slag to hag to old lag, Emanuelle gets the story and we the viewers get a depressing litany of sadistic lesbian guards, sexual humiliation, unerotic shower block nudity and tired bump-and-grind. Director Bruno Mattei evidently enjoyed it a lot more than anyone else, since he essentially remade it a year later as the aforementioned ‘Emanuelle Escapes from Hell’.

I too have escaped from hell. My dalliance with Black Emanuelle has come to an end. No disrespect to the lady: Laura Gemser in her heyday was a vision to behold. Unfortunately that vision was too often rendered on celluloid canvases smeared with filth and executed with the shoddiest aesthetic and very little in the way of directorial capability.

Fare-thee-well, my dusky maiden, it was bitter-sweet at best. But we’ll always have Ely Galleani.
Posted by Neil Fulwood at 10:27 AM

No mention at all of Emanuelle Around the World? The film including the bit where a woman is penetrated by a snake? The scene in the whole history of movies that I want the most to unsee, and for that reason the scene that is the most permanently chiseled into my brain?

I try not to be spiteful, vengeful person, but it's really hard not to feel like the world is a better place with Joe D'Amato out of it.

I made a conscious decision to avoid that particular title, Tim, and I’m forever in your debt. I knew little or nothing about the Black Emanuelle films going into this mini-retrospective; the only true indication of the depravities to which the franchise would sink came from a comment in your ‘Anthropophagus: the Beast’ review where you summarised D’Amato’s cinematic achievements prior to directing George Eastman in foetus-munching scenarios:

"The Black Emanuelle films started off tawdry; in D'Amato's hands they became flat-out repugnant, bottoming out with ‘Emanuelle Around the World’, which prominently features a snake-on-woman bestiality scene (faked, thank the Lord)"

As an ophidiophobe and a man who enjoys sex with women, I decided I didn’t want to risk the former scuppering my enjoyment of the latter. As ‘Emanuelle in America’ has proved, it may be sometime before I can bring myself to look at a horse without experiencing a profound feeling of depression.

And people say that critics don't serve a purpose!