This post is dedicated to The Mack: good luck, toots – we’re all going to miss you at Camp Happy. 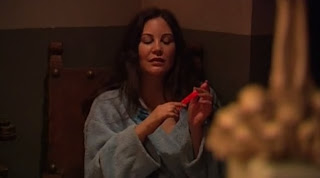 The opening credit sequence of ‘Jacqueline Hyde’ (think about it) announces it as a Pixie Flicks Entertainment Inc. production. It boasts home-video production values, stars nobody you’ve ever heard of (although on the evidence of just this one movie I’m all for hailing voluptuous brunette Gabriella Hall as the Catherine Zeta Jones of late-night cable), and follows an entirely predictable narrative course.

By any set of critical perameters, it’s average at best. But, oh lordy lordy, if doesn’t have more wit, charm, imagination and entertainment value than the entire Black Emanuelle canon put together! (Hmmm, maybe this would be a good time to reapproach the collected works of Shannon Whirry: ‘Animal Instincts’ could well emerge as the ‘Citizen Kane’ of top-shelf titillation.*)

Loosely based on a Robert Louis Stevenson classic, ‘Jacqueline Hyde’ (geddit? geddit?) opens with twenty-something telesales operator Jackie Hyde (Hall – 39 at the time of filming and commendably convincing playing a decade younger) getting fired from her job after snapping back at a potential customer. On top of this she discovers that her reclusive grandfather has just died. The cloud/silver lining maxim applies, and she inherits his palatial residence.

With no friends, no relationship and no job, the cripplingly unselfconfident Jackie moves into the old house after the paperwork is smoothed out by upwardly mobile young law-firm intern Philip Clarke (Jeremy Ordaz). She’s initially conflicted: guilt at not really having known grandpa; sexual confusion when the only bar in the neighbourhood turns out to be a strip joint and she recoils from finding herself attracted to one of the girls; and jealousy at her sexually liberated neighbour Becky (Rebekah Ellis). 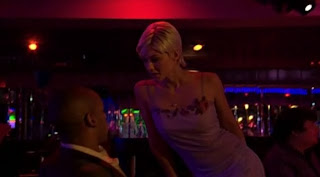 Then she discovers an elixir her grandfather – a magician apparently obsessed with finding a way to literally transmute into someone different – had concocted. Half drunk and freaked out by the discovery, she accidently spills some into her wine. Racked with spasms, she pulls herself to her feet only to discover Becky staring back at her from the mirror. She faints dead away. Wakes next morning to a bastard of a hangover and a stranger in her bed.
Doesn’t take our gal long to figure that the elixir can not only shitcan her hang-ups but engender physical alteration. In short order, she impersonates Becky’s stud-muffin boyfriend to find out what it’s like to be a man, and assumes the body (and bitchy persona) of raven-haired model Jacqueline (Blythe Metz). The rapacious and ultimately psychotic Jacqueline persona eventually takes over, imprisoning Jackie behind a mirror and heading out into the neon hinterlands to seduce and destroy. The stripper Jackie took a fancy to but didn’t do anything about it? Jacqueline so goes there. 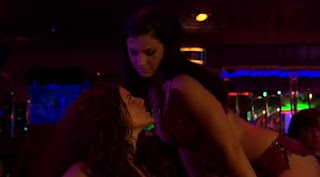 However, in impersonating Becky as well, Jacqueline doesn’t realise that one of her conquests is Philip’s colleague at the law firm and suspicions are aroused …
The monetary restrictions of ‘Jacqueline Hyde’ are writ large. Locations are restricted to Jackie’s house, the strip joint and Philip’s office (Philip and his colleague seem to pull in a lot of late nights or work Saturday mornings, the better to disguise the fact that these scenes were obviously shot at an anonymous office block after hours). Special effects are somewhere between clip art and PhotoShop. This is the film’s most noticeable weakness, particularly when writer/director Rolfe Kanefsky strives for sequences (such as the ‘Society’-like melding scene towards the end) way outside the remit of his petty cash budget.
Still, it’s never less than fun and occasionally ‘Jacqueline Hyde’ takes you by surprise. The camerawork is much better than you’d have any reason to expect, there are some genuinely funny scenes (such as the segue from Jackie’s faux pas to the disciplinary meeting with her boss) and overall there’s a palpable impression that everyone involved was giving it their all. Gabriella Hall (who ticks most of the boxes as far as I’m concerned) is just too damn appealing to convince as a lonely and friendless singleton, but she delivers a winning turn. Ellis is seductive and playful and ought to be a mainstream star right now. Metz overacts, but has enough va-va-voom to make the vamp act convincing.

‘Jacqueline Hyde’ is about as true to its alleged source material as Tony Blair’s policies were to his election promises, but it matters not one bit. My catch-all criterion by which cheapie exploitationers prove their worth is that they deliver good unclean fun. The Ilsa films fail as often as they succeed. The Black Emanuelle corpus just outright fails (except where Ely Galleani turns up for, ahem, some Sapphic shenanigans). ‘Jacqueline Hyde’, however, delivers: T&A, a few bits of low-brow comedy, and an honest to God attempt at a story. It’s not much to ask, but so few films of this ilk even bother.


*Or, as my good friend Paul would put it in typically erudite fashion, “a trouser arouser from the erection section”.
Posted by Neil Fulwood at 9:11 PM

I wasn't a fan of this, but for some reason it's a movie that I remember quite well despite having watched it about a year and a half ago. I really dug Blythe's over the top performance (if you liked her in this, you should check out NIGHTMARE MAN, which was made by the same director). Other than that, though, I didn't really care for it. As far as Gabriella Hall, I've watched (and taped) many of her films on late night cable back in the day when I was a teen.

To be honest, I might not have taken to this one so much if I hadn't been coming off the grubby venality of the Black Emanuelle films. Compared to them, 'Jacqueline Hyde' was a breath of fresh T&A.

I'll definitely look out for 'Nightmare Man'. And anything else with Blythe Metz or Gabriella Hall in.