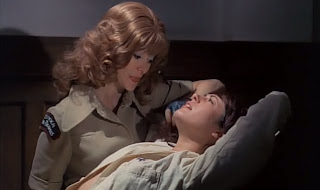 Also known as ‘Wanda, the Wicked Warden’ and ‘Greta the Torturer’, ‘Ilsa, the Wicked Warden’ probably started out as, I dunno, something like ‘Untitled Cheapie Jess Franco Project’; then, at some point during shooting (I’m guessing the first scene in which the eponymous anti-heroine disrobes) someone said, “Hey, Dyanne Thorne’s in it and she’s wearing a uniform, so let’s call it an Ilsa film.”

And thus Jess Franco’s multi-monikered opus wormed its way into the Ilsa canon.

Having plumbed the depths with some Joe D’Amato Black Emanuelle titles last week, I’m dipping a toe back into the venal pool of sexploitation filth. And once the output of Joe D’Amato has been considered, the next logical fucking useless director of aesthetically redundant sleaze is Jesús Franco Manera.

I am prepared to like Franco a little more than D’Amato, purely because his birth name was Jesús. This is the guy who made ‘Eugenie: the Story of Her Journey into Perversion’, ‘Women Behind Bars’, ‘Love Letters of a Portugese Nun’, ‘Macumba Sexual’ and ‘The Bare Breasted Countess’, all of which demonstrate the two major thematic concerns of his oeuvre (the first being tits and the being second ass) … and his name was Jesús! Awesome!!!

‘Ilsa/Wanda/Greta, the Wicked Warden/Torturer’ [delete as applicable] takes place in some unnamed tinpot little South American dictatorship where a woman makes an escape attempt from a mental hospital. This meticulously planned and logically executed break for it involves running away during shower time (the shower scene – the first of many – goes on for about five minutes) and snatching a shirt that doesn’t button before she heads over the wall and into the jungle. The net result is that she makes her (soon to be dashed) dash for freedom with her tush on display and cleavage all over the place.

Ladies and gentlemen, please give a big Agitation of the Mind round of applause for Señor Jesús Franco.

Here’s the thing about Franco, the thing that differentiates him from D’Amato. Whereas Joe D’Amato was a tasteless hack and he knew it, Franco often seems to be labouring under the gargantuan delusion that he’s an auteur, a cinematic great, the Fellini of B-movies. 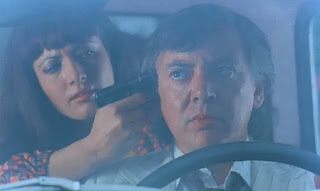 An excellent example is the scene where our re-incarcerated escapee’s sister Abbie (Tania Busselier) ambushes the doctor Milton Arcos (Franco himself) responsible for several referrals to the facility in his car and coerces him at gunpoint into aiding her impromptu investigation. This is what probably went through Franco’s mind: I will shoot this five minute scene in one take, framing Abbie and Milton within the cramped confines of a small car. There will be nothing to distract the audience from the narrative import of this crucial dialogue scene. The acting alone will carry it. Moreover, the frame-within-in-a-frame will provide an ironic thematic counterpoint to Abbie’s sister’s imprisonment as well as subtly hinting at what lies in store for Abbie herself. This is how the scene actually plays out: two people who can’t act sit in a car and make no attempt to hide the fact that they’re reading off cue cards.

Or how about the scene where Ilsa hooks up with a corpulent military type (the mental hospital, btw, is merely a cover for a Guantanamo Bay type facility for political prisoners … except with more lesbianism and felching) and the two go at it hammer and tongues in a seedy motel.

Ladies and gentlemen, the master of the mise-en-scene: Señor Jesús Franco.

Again, there’s a long dialogue scene (for a T&A purveyor, the dude sure made talky films!) during which Ilsa seductively caresses herself and finally peels off her slip. Fair enough, except that this is how Franco shoots it: 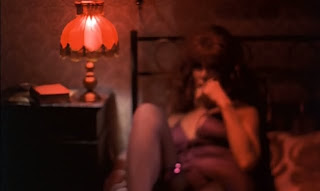 Let’s just recap: there’s a woman. On a bed. Getting all seductive. And the only fucking thing that’s in focus is the goddamn bedside lamp! W to the T to the F?

So, anyway, Abbie infiltrates the “hospital” and immediately gets on the wrong side of Juana (Lina Romay), top dog amongst the inmates by dint of being Ilsa’s plaything. (Ilsa likes to play rough, incidentally. There’s an acupuncture scene that has nothing to do with acupuncture in the traditional sense that’ll make you wince.) She quickly uncovers the truth about the facility and Ilsa’s ties to the military junta – but alas, alack and oh fucking hell, Milton’s complicity in her little scheme is unearthed and things go pear-shaped for our plucky heroine.

That’s yer lot, plotwise. The rest of the movie is given over to acres of naked female flesh (predominantly in shower block settings) and random and protracted acts of sadistic cruelty. Protracted is a good way of describing Franco’s directorial approach. At about the halfway mark, something happened to me I would never have believed possible: there were naked women onscreen and I started losing interest. Same deal with the violence: the more fetid and extreme it got, the less impact it had on me. Scenes of genital cauterization washed over me with all the tedium of a car insurance commercial. Something is very wrong with a film when it depicts venality and humiliation and your only response is “ho hum”.

And that would have been my last word on ‘Ilsa, the Something Something’, a dismissive little finale to a review that really didn’t need to be 800 words long. Except for the ending. The ending comes out of nowhere. Blindsides you. I’m not saying anything more about it. The ending is one those blow-to-the-solar-plexus WTF moments, and I can only quote Erich Kuersten of the ever-excellent Acidemic, who warned that the film had “a cumulative traumatic power, and left me in a state of disturbed sorrow for days after”. Truer words have seldom been spoken.
Posted by Neil Fulwood at 9:19 PM

Neil, I've seen that ending, too, and Erich's words are just about right. Kind of like looking into the abyss, wasn't it?

And the abyss sharpening up a steak knife as it looks back at you.

The ending takes what would otherwise be a grubby T&A exploitationer that a sufficiently cold shower would sluice away, and imprints something very different on your psyche.

Darn, all this talk about the wacky ending and I can't find a streaming version anywhere online. Not sure how badly I want to even download this, though...

Will watch the ending tonight...

I just watched the whole movie in about 10 minutes and even that was enough to make me feel the need to go take a shower. There's comedy in the seeming mix of explicitness and randomness in how the nudity is presented (especially due to the "just a bit longer than a dress-shirt" tops the prisoners wear)...you are one sleazy, sleazy fellow, Jess Franco.

As for the ending -- the hell was what was that all about? I'll wager Franco had just seen THE PERFUME OF THE LADY IN BLACK and was completely ripping that film off.

Hmmmm. Now there's a thought: 'Perfume of the Lady in Black'. That's a title I need to feature on the blog before much longer.