WINTER OF DISCONTENT: The Machine Girl 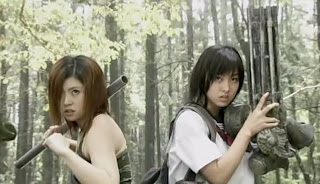 I’m guessing the genesis of ‘The Machine Girl’ went something like this: writer/director Noboru Iguchi watched the ‘Planet Terror’ half of ‘Grindhouse’, got ridiculously overexcited at the sight of Rose MacGowan with a machinegun leg, rushed out before Tarantino’s ‘Death Proof’ even had a chance to get the handbrake off, dashed into the nearest saki bar, downed a few glasses and drafted a pitch on the back of a napkin.

‘The Machine Girl’ is about a high-school girl named Ami (Minase Yashiro) who is juggling her education with her responsibilities to her younger brother Yu (Ryosuke Kawamura) after the suicide of their parents, shamed by a wholly unfounded murder accusation levelled against them by a corrupt cop who, it turns out, is in cahoots with Yakuza bigshot Ryuji Kimura (Kentaro Shimazu). To complicate matters, Kimura’s thuggish son Sho (Nobuhiro Nishihara) is busily establishing himself as a bargain-basement version of his dear old pa. Sho and his gang are tormenting Yu and his best friend Takeshi, demanding money with menaces.

When Yu can’t pony up enough, Sho and his posse up the ante. Ami’s attempts to save Yu and Takeshi are hampered by the intervention of a bunch of would-be rapists, who she kicks the ever-loving shit out of. As a result of the delay, she finds Yu and Takeshi dead. Ami goes out for revenge. 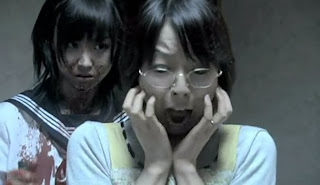 Quickly tracking down one of the bullies, she gets into a confrontation with the lad’s parents. The ensuing fight results in her arm being badly burned; nonetheless, she extracts a bloody revenge. The trail leads to Kimura’s well-guarded estate. Ami breaches the property and violence ensues. Unfortunately, she’s outnumbered and captured. Kimura and his sadistic trophy wife Violet (Honaka) torture her, during the process of which her arm is cut off.

‘The Machine Girl’ has enough narrative to fill a postage stamp and still have room for a couple of verses of ‘McArthur Park’. The acting is dreadful. The fight scenes are hilariously bad. The effects are cheesier than a lump of brie left in the sun. And I have no doubt that it’s all deliberate. ‘The Machine Girl’ exists for one reason only: to allow the undiscerning viewer to gawp at a schoolgirl deploy all manner of hardware with the net result of as much blood-letting and dismemberment as possible.

That it would be rated 18 was a foregone conclusion, and yet the violence is so gleefully over the top – blood doesn’t spurt, it geysers; bullets don’t just hit people, they strip the flesh off them – that only the most Mary-Whitehouse-like letter-writing saddo could possibly find anything in this movie the slightest bit offensive. Which is part of the film’s weird charm. It should be unremittingly nasty. This, after all, is a revenge flick wherein a yakuza takes a dozen or so nails in the face before he talks, an errant chef is forced to chop his own fingers off and serve them as part of a sushi platter, and Miki cuts loose with a chainsaw in a manner which would make Leatherface back off with his palms upraised muttering, “Whoa, girl, take it easy.” 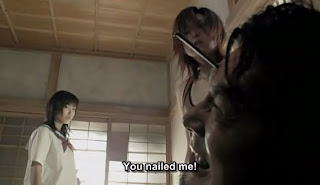 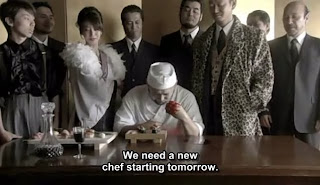 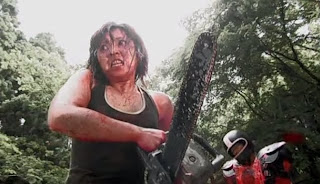 Machinegun arms and improperly used power tools aren’t the only hardware on display. Samurai swords and throwing stars get their obligatory outing and Violet models an uncomfortable-looking but nastily effective drill bra.
Yes, you read that right. A drill bra. 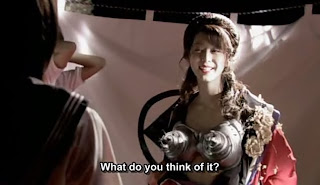 I’m winding up this review right here. The image you’ve just seen arguably defines this film even more than Ami’s machinegun arm. It’s an image I can imagine readers responding to in one of two ways:
(a) Fuckin’ awesome! This one’s going on the rental list!
or:
(b) Fuck’s sake, Neil, when are you going to start writing about real movies again?
To those who answered (a), I can only say: stick around for tomorrow’s review – similar kind of movie but it makes ‘The Machine Girl’ look subtle, sophisticated and erudite.
To those who answered (b): soon, very soon. But there are still some dark and depraved cinematic backwaters to be explored.
Posted by Neil Fulwood at 9:59 PM

Strangely, the loudest bit of inaccuracy for me was that the woman who played the mom is one year older than the machine girl. I mean, she was supposed to be the mother of a fifteen-or-something kid.

This has been on my Netflix Inset Watch Queue for far too long. I'll fix that ASAP.

Look forward to hearing what you think of it, amigo.