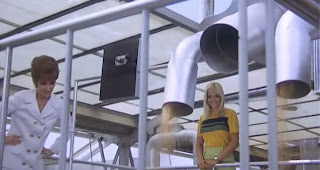 Picture the scene: yours truly and his good lady wife enter a fish ‘n’ chip shop, emphatically debating yours truly’s recent film-viewing choices. This is how the conversation must have played out to the very conservative and increasingly disconcerted middle-aged gentleman ahead of us in the queue:

PAULA: … can’t believe you watched a film called ‘The Killer Nun’. I’m starting to worry about you.

ME: I’d never seen a nunsploitation film before.*

PAULA: Did you just say “nunsploitation”?

ME: Yeah. It’s all about nuns doing un-nun-like things.

PAULA: Okay. Let me get this straight. A cheap exploitative movie aimed at a predominantly Africa-American audience is blaxploitation, right?

PAULA: And a cheap exploitative war movie is warsploitation or Nazisploitation depending on the iconography?

ME: Yeah. (To the guy behind the counter) Large chips wrapped and two fishcakes, please mate.

PAULA: Right. And if one of your Italian directors made a cheap knock-off of ‘Chicken Run’ but with added nudity and violence, it’d be chickensploitation would it?

ME: Well, there is a giallo called ‘Death Laid an Egg’.

PAULA: Why did I marry you? 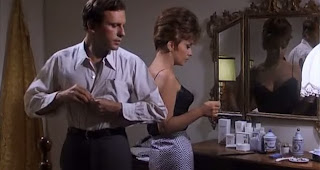 Guilio Questi’s 1968 giallo plays out against the glamorous backdrop of, uh, battery farming. An early scene, setting up an accident-or-murder-attempt which provides the film’s major dynamic, features the installation of some new hi-tech equipment therein. A newcomer who threatens capon head honcho Marco (Jean-Louis Trintignant)’s seniority within the umbrella corporation who act as the chicken farm’s backers is an advertising executive obsessed with humanising chickens as part of his publicity campaign.

Folks, we’re a long way from the glitzy fashion house locales of ‘Blood and Black Lace’ or ‘The Red Queen Kills Seven Times’.

Marco owes his professional status to his wife Anna (Gina Lollobrigida) who actually owns the chicken farm. He is equally influenced by the shadowy board of the umbrella corporation (in full-on Mafioso style, they call themselves The Organisation). To make things more complicated, he’s conducting a clandestine affair with his secretary Gabriella (Ewa Aulin), with whom he fantasizes about running away even if it means turning his back on a life of wealth and privilege. Anna also fantasizes about Gabriella in a manner that wouldn’t be out of place in a Sarah Waters novel. 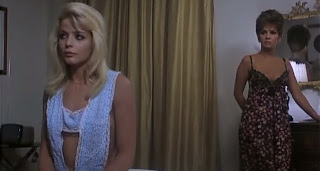 Marco’s world starts coming apart. Gabriella is courted by Modaini (Jean Sobieski), aforementioned ad-man. Marco and Anna are menaced by the workers they laid off as a result of automating the chicken farm. Anna, convinced Marco is tricking with hookers, inveigles Gabriella into posing as a call-girl with her in a clumsy entrapment manoeuvre. This puts both women in a risky position, as it seems that Marco is behind a series of sexually-motivated murders in cheap anonymous hotel rooms.

To anyone who’s rubbing their hands together right now and deciding to add it to their rental list and to hell with the stupid title, pray hold fast for the moment and read the next few paragraphs. You’ll thank me.

‘Death Laid an Egg’ starts ickily but promisingly. Footage of chicken fertilization makes up the credit sequence; Bruno Maderna’s atonal score does to the ears what the imagery does to the eyes. This bit of business out of the way, Questi immediately disorientates the viewer by cutting between at least half a dozen different characters in (possibly) different locations, punctuating the montage with (ostensibly) random exteriors – arterial roads, flyovers, hotels – before full-stopping the sequence with what might be a murder.

… and at least one scene of off-the-scale what-the-fuckery: (Seriously, is this a health & safety at work issue or what?)
Unfortunately, it goes downhill veeeeery quickly. Maderna’s jolting music, so effective during the credits, thuds and clunks its way onto the soundtrack at what seems like every five minutes throughout the rest of the movie, usually at the most inappropriate moment. You feel like it’s setting you up for a grand guignol murder or a tense chase scene, but it never comes. Instead, Questi gets it into his head that he’s making a Godard-style bit of pop art, or a Fellini-esque study of the jaded idle classes. Occasionally, maybe because the producers curtly reminded him, he cuts loose with a few mysterious goings on.
I reviewed ‘Black Belly of the Tarantula’ earlier this year and was underwhelmed for the simple reason that it awkwardly straddled the very different disciplines of giallo and art film. The polarities never reconciled. The tonal shifts were too jarring. It wasn’t cerebral enough for an art film, nor were its ostensibly sleazy elements quite sleazy enough to satiate the hardened giallo fan.
I take it all back. ‘Black Belly of the Tarantula’ is as sleazy and overtly giallo-centric as ‘Strip Nude for Your Killer’ (up next on the review list) compared to ‘Death Laid an Egg’.
With its panoply of sexual and financial power games, hookers, morally comprised protagonists, shadowy antagonists, attempted murders, fetishized violence, abundance of eye candy and performances from established stars Lollobrigida and Trintignant, ‘Death Laid an Egg’ ought to be at the forefront of the top tier gialli, swapping leather-gloved murder techniques and Ennio Morricone soundtrack albums with the likes of Bava, Argento and Fulci. That it isn’t is depressing. So much potential is squandered. When I sat down to watch ‘Death Laid an Egg’, it was with a view to a cheap one-liner. I wanted it to be an undiscovered gem – eggcellent or eggceptional. Or so wonderfully and entertainingly terrible that it was eggcruciating; a bad egg.
Turns out, this was one giallo that was basically yellow; an exploitation film that chickened out.

*That’s my story and I’m sticking to it.
Posted by Neil Fulwood at 9:20 PM