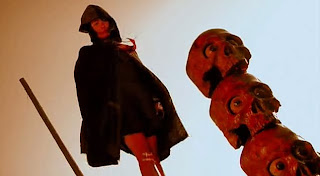 Before I begin this review properly (or as properly as can be expected for a review of a film that scores this highly on the what-the-fuck-o-meter), please join me in a round of applause for whoever thought up that title. Seriously. Let me give it its own paragraph:

Say it aloud. Drop it in conversation with colleagues. Recommend it to your mother. I guarantee you, the title alone will get a reaction.

Now consider the fact that the titular antagonists are schoolgirls. One of whom wears ridiculously short and flouncy skirts. Time for a screenshot, methinks. Imagine yourself in a weird alternative universe where this ensemble is an acceptable school uniform: 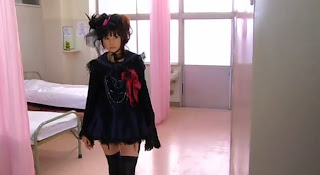 The young lady in the picture is Keiko (the frankly gorgeous Eri Otoguro), spoiled brat high-school princess and leader of a group of chavettes who terrorize the sensitive Jyugon (Takumi Saito) into being Keiko’s boyfriend. Then transfer student Monami (the appealingly winsome Yukie Kawamura) turns up and decides she quite likes Jyugon as well.

Two girls, one guy, rivalry, jealousy, bitchiness … ho hum, yeah, whatever. Or at least, that would be my response to a normal film which navigated these narrative waters. And by normal I mean any film that isn’t ‘Vampire Girl vs Frankenstein Girl’.

(Can we have another round of applause for that title, please?)

‘Vampire Girl vs Frankenstein Girl’ is about so much more than Keiko and Monami going at it hammer and tongues over who gets to be with Jyugon. (Because, yeah, two extremely fanciable girls bitch-slapping each other for first dibs on that good good Fulwood lovin’ was something that happened all the time during my schooldays … not!) It’s also about the difficulty of an outsider finding acceptance in the hierarchically structured high-school environment. Hence we have the self-harming squad, determined to triumph and this year’s wrist cutting rally … 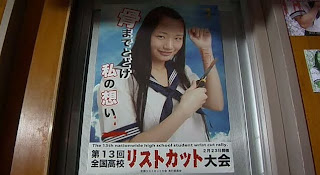 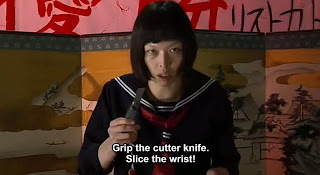 … and a group of Japanese students who make themselves up as Africa-Americans (“the coolest race ever”) and demand black power. 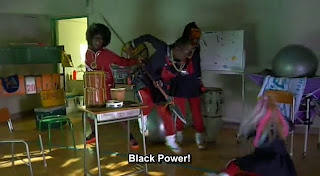 The above pictures should tell you all you need to know about ‘Vampire Girl vs Frankenstein Girl’. In the temple of wrong, this motherfucker occupies the penthouse suite. Let me add another element into the equation: Monami is a vampire who’s given over to performing slo-mo dance routines after decapitating her victims, while Keiko’s vice-principal father secretly dresses as a witch doctor and conducts scientific experiments towards the reanimation of dead bodies assisted by oversexed school nurse Midori (Sayaka Kametami). 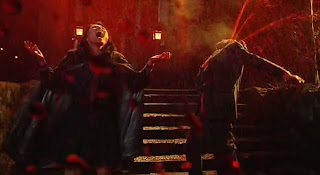 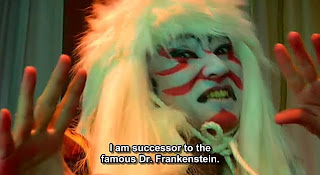 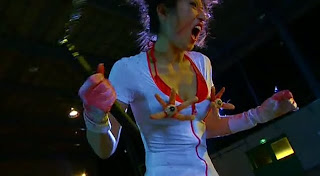 And we’ve not even considered the hunchbacked janitor Igor (Jiji Bu) who spends inordinate amounts of time feeding things into the incinerator. Or the accident which results in Keiko’s father finally succeeding in his reanimation experiments … by using his daughter as a test subject. Hence the title. ‘Vampire Girl vs Frankenstein Girl’.
As with my review of ‘The Machine Girl’, I probably need say no more at this point. You’ll have got the picture by now. Schoolgirls in short skirts, one a vampire, the other the sexiest version of Frankenstein’s monster ever conjured by the magic of the movies. Updated to allow for Phillips head screws instead of bolts through the neck, Keiko is possessed of the ability to detach her arm and either use it as a boomerang kitted out with a Stanley knife, or attach it to her head and effectively turn herself into an autogiro, the better to pursue a schoolgirl vampire whose cloak gives her the ability to fly.
Which is not a sentence I ever envisaged myself typing.
‘Vampire Girl vs Frankenstein Girl’ (I don’t think I could ever get tired of typing that title) was produced by the same company behind ‘The Machine Girl’ and boasts a similar aesthetic, budgetary limitation and thespian-challenged cast. It’s also about a thousand times more fun. The effects are equally cheesy, although a vampire’s POV rendering of humans as walking capillaries is unexpectedly creepy. 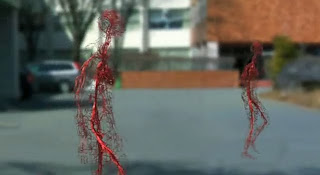 Fuelled by a soundtrack that veers from J-pop to J-metal by way of what sounds disturbingly like J-C&W, ‘Vampire Girl vs Frankenstein Girl’ is packed with hysterically stupid set-pieces, tsunamis of blood-letting, humour so politically incorrect (particularly in its racial stereotypes) that it makes your average ‘Carry On’ film look like a Merchant Ivory production, and levels of body horror to make David Cronenberg take a couple of aspirin and lie down in a darkened room.
The what-the-fuck-o-meter malfunctioned while I was watching this film. My sanity was affected by it. I have discovered a new appreciation for schoolgirls in sailor suits played by actresses in their late twenties. I fear my perception of the world may never be the same again.
And if that’s not a recommendation, I don’t know what is.
Posted by Neil Fulwood at 5:07 PM

I always imagined that this film could never possibly live up to its title or its poster. You may have proven me wrong here. Now I feel like I have to see it.

I was watching Tokyo Gore Police the other day with a friend and it had a similar effect on her "turn that shit off! Its too much!" was her answer, if I remember correctly.

I saw the previews for Machine Girl, and I saw a girl with a machine gun popping out of her ass and killing everyone with it, so if this movie is anything like that, I should be in for a crazy good time. I love over the top crazy shit like this! And only Japanes can do movies as nuts as this.

Ever seen Ricky-Oh? If you havent, highly recommend you do for your winter of discontent!

Ed - I rather think you do have to see it, but be aware that moments of cringely-embarrassing cheapness sit cheek by jowl alongside the deliciously stupid and utterly OTT nonsense I lapped up so enthusiastically in my review. In other words: enjoy, but don't say I'd didn't warn you!!!

Franco - all it took was a couple of screengrabs for my wife to give a sad shake of the head and make with a look that clearly communicated serious doubts as to why she married me in the first place. It didn't help when I told her the next title on my exploitation list is 'Killer Nun'!

I was planning on covering this for Nasty November on the Death Rattle, but I couldn't even finish it. WHat I watched of it was OK, but the new wave of Japanese Splatter movies get on my nerves more than anything. I thought the chick who played Frankenstein Girl was GORGEOUS, though (which you also mentioned)!