WINTER OF DISCONTENT: The Card Player 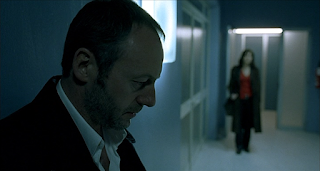 There’s a bit of a tradition on The Agitation of the Mind, when discussing anything directed by Dario Argento in the last three decades, to identify ‘Opera’ (1987) as his last great work as director and everything that followed as something of a rollercoaster where the upswings can best be described as mildly disappointing and the plummeting descents are outright visits to Shitsville. And, Christ, isn’t it depressing to ruminate that the man who gave us ‘Deep Red’, ‘Suspiria’, ‘Tenebrae’ and half a dozen other great genre movies has – with the exceptions of two episodes of ‘Masters of Horror’ and the almost-there ‘Stendhal Syndrome’ – spent almost thirty years in a tailspin of negative quality control?

He followed the aforementioned ‘Stendhal Syndrome’ with what is reckoned to be his career nadir, ‘The Phantom of the Opera’, before making a bit of a box-office comeback (in his native Italy at least) with ‘Sleepless’, a rather studied throwback to the classic gialli of old. Three years later, he went back to the giallo well for ‘The Card Player’. It’s a curious piece, which in some places feels like Argento’s attempt to do ‘The Silence of the Lambs’ but also contains a stultifying number of scenes of cops standing around in institutional and brutally utilitarian interiors looking moody and spouting exposition, for all the world as if Argento were putting together a showreel for the producers of ‘CSI’.

Elsewhere, though, shadows of Argento the demented visual stylist and master of the set piece are visible, particularly in the scene where a home invasion is preceded by the creepy reflection of a masked intruder on the convex surface of a glass bowl … But I’m getting ahead of myself. 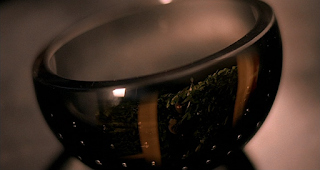 ‘The Card Player’ starts with brittle cop Inspector Anna Mari (Stefania Rocca) fending off the ingratiating advances of colleague Inspector Morgani (Mario Opinato) while trying to find a tourist – a young woman – who has gone missing in room. She quickly gets a lead: an email from the abductor inviting the police to play an online poker game with the girl’s life as the prize. When Police Commissioner Marini (Adalberto Maria Merli) forbids participation, abductor turns killer, knifing his victim to death on camera. Later, Marini’s daughter Lucia (Fiore Argento) falls into the psycho’s hands.

Meanwhile, Anna finds herself working with – and falling for – alcoholic Irish cop John Brennan (Liam Cunningham), on secondment to the British embassy in Rome after an armed response fiasco back in the UK which saw a minor dead and Brennan made the scapegoat. Brennan strides into the movie, all piss and vinegar, and within seconds gets in a fight with one of Anna’s colleagues after dismissing said individual’s deductive prowess as “bollocks”. Inbetween knocking back the hard stuff from a hipflask and drunkenly crashing at Anna’s pad after belting out a tone deaf rendition of ‘Danny Boy’ (cliché alert!), Brennan proves himself a forensics expert and tenacious as all hell when he becomes obsessed by an almost overlooked detail that – in true giallo fashion – he can’t quite put his finger on. 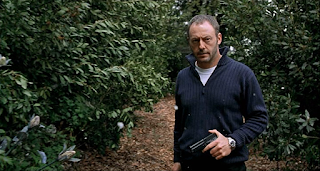 Thus it is, that after twenty minutes or so of bland procedural narrative and dull cinematography, ‘The Card Player’ suddenly gets its funk on and things start to move. Anna and Brennan recruit wunderkind poker player Remo (Silvio Muccino). The killer ups the ante by snatching Marini’s daughter. Anna is targeted in her own home and proves highly proficient in responding to the threat. Remo is played for a fool by a honeytrap and finds himself in a game where he has no control over the odds. Brennan finally cracks the crucial clue and, unadvisedly, goes haring off without any back-up. These scenes move the action out of the insipid interiors and into a cityscape that is soulless, graffiti’d and either awash with flat harsh light in the daytime or a symphony of shadows at night.

Granted, there’s none of the bravura camerawork or prowling POV shots that define Argento’s best work, but it has a modicum of visual style and narrative focus. For a while, at least. Its middle third is ‘The Card Player’ at its best and, unfortunately, when it stops being pretty good, it doesn’t just slope off to not that good or even mediocre. Nope, it degenerates like a time-lapse fast-forward of a putrefying corpse. The twist isn’t something you just see coming. Nope, it flies over the DVD rental store in a biplane with a fifty-foot banner behind on which is printed in heavy capital letters the phrase “obvious from the fucking outset”. The ending isn’t just clichéd and hackneyed (the damsel in distress is shackled to the fucking railway tracks, for fuck’s fucking sake”). Nope, it’s actually profoundly embarrassing. And then there’s the out-of-nowhere final scene that is, presumably, meant to be life-affirming, about which I can only say: Dario, we don’t come to you for affirmation, mate; we come to you for rococo set design and operatic death scenes. 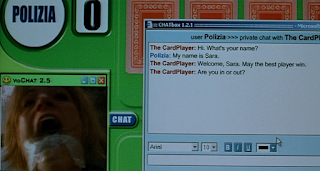 ‘The Card Player’ was originally conceived as a sequel to ‘The Stendhal Syndrome’, with Asia Argento reprising her role of Detective Anna Manni – though how that would have worked given the ending of ‘The Stendhal Syndrome’, I have no idea – and the find-and-replace retrofitting of Anna Manni to Anna Mari is indicative of the laziness that blights the script. Ditto the character of John Brennan. John Russo in the first draft, with Matthieu Kassovitz set to star. When he dropped out and was replaced by Cunningham, one perfunctory scene was scribbled down to account for an Irish cop having any form of jurisdiction in Rome. Curiously, a big deal is made of his twenty-year residency in London only for said piece of information to have absolutely no bearing on the rest of the film. Likewise Anna’s emotional backstory – she’s still coming to terms with her father’s suicide – proves to be nothing but the set-up for the ludicrous finale.

‘The Card Player’ exists in that mid-to-late period of the Argento filmography where considered critical analysis is replaced by a trade-off against the other films: it’s not quite as good as the not-as-good-as-they-could-be ‘Stendhal Syndrome’ or ‘Sleepless’, but neither is it the abject train wreck of ‘Phantom of the Opera’ or ‘Mother of Tears’, and at the very least it’s more coherent than ‘Giallo’. It’s a poor way to evaluate a film’s worth, but you work with what you’ve got.
Posted by Neil Fulwood at 9:43 PM