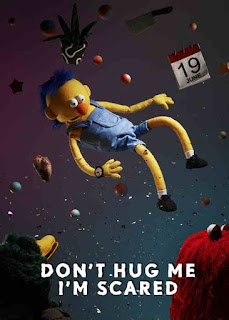 ‘Don’t Hug Me I’m Scared’ is a six part internet series that plays like David Lynch meets ‘Sesame Street’. The aesthetic embraces old-school puppetry (you can sometimes see the strings), stop-motion, CGI and live action. The emotional register runs the gamut from laugh-at-loud amusement at the safe and comfy end of the spectrum to a deep sickening sense of dread at the other. Which is not to say that it makes the journey gradually, through varying stages: the stock-in-trade of ‘Don’t Hug Me I’m Scared’ is the way it suddenly and often terrifyingly lurches into absolute nightmare.

At base level, the series is a cynically brilliant pastiche of children’s television: there is a familiar, cosy location (the main characters’ house) which is occasionally ventured outside of; a small handful of characters with simple names and really only one defining characteristic each; the anthropomorphism of inanimate objects as arbiters of gently improving moral lessons; and bouncy repetitive songs as delivery systems for said lessons. In virtually every episode, though, the moral lesson becomes contradictory or spirals into self-looping nonsense; the imagery correspondingly takes a turn for the grotesque and the editing becomes frenzied.

The first episode, ‘Get Creative’, is a case in point. There’s a series of static shots of an orderly interior decorated in primary colours; a clock ticks. This accounts for almost thirty seconds of the episode’s three minute running time. Our three protagonists – Yellow Guy, Red Guy and Duck Guy – are sitting round a table. A notebook comes to life and starts singing a song, the first line of which is “what’s your favourite idea?” The gang protest that they don’t have any and are initially resistant to Notebook’s exhortations to think creatively. However, when they’re encouraged to discern shapes in the clouds outside, they participate enthusiastically. “I see a hat, I see a cat / I see a man with a baseball bat” – the cloud morphing into a threatening shape, looking for all the world like it’s about to concuss the very sky it’s floating in, is the episode’s first indication that something a little bit wrong is going on here. Subversiveness comes thick and fast: Yellow Guy paints a picture of a clown, Notebook pours black paint over it; Yellow Guy picks green as his favourite colour, Notebook pooh-poohs his choice (“green is not a creative colour”); Notebook tells them the rule to creativity is to “listen to your heart, listen to the rain / listen to the voices in your brain”, the gang respond by coating a human heart in glitter and paper streamers, doing weird tribal dances, baking the cake into a pie, hallucinating the heart’s escape into a mousehole and spelling out “DEATH” in fridge magnet letters. The song by now has given way to psychedelic music that sounds like the Velvet Underground doing a try out for the ‘Thomas the Tank Engine’ theme. Notebook evaluates their efforts: “now let’s all agree never to be creative again”. Notebook self-closes and falls back onto the table as if dead. The screen goes black.

‘Get Creative’ is happiest and least disturbing episode of ‘Don’t Hug Me I’m Scared’.

The other episodes are on the themes of time, love, technology, healthy eating and dreams. If there’s a passive-aggressive and slightly spiteful quality to Notebook in episode one, the objects that spring to life through these next five instalments are veritable antagonists. The clock in episode two responds to Duck Guy’s suggestion that time is merely a construct of human invention by sounding his alarm so loudly that Yellow Guy’s ears bleed, an act he follows up – notwithstanding his earlier assertion that the future does not exist – by advancing time at such a rate that the gang age hideously within seconds, flesh peeling back from their fingers, their faces distorting. In episode three, Yellow Guy – already well-established as the most child-like of the three – is upset at Red Guy killing an insect during a picnic and goes to sit in a tree. Here, a butterfly serenades him, promising to teach him about love. Cue floating clouds and the kind of rainbow-saturated dreamscape that the cast of ‘My Little Pony’ might find too saccharine. All of this is in the service of grooming Yellow Guy for induction into a cult whose leader is immolated ‘Wicker Man’-stylee during the end credits.

For most shows, this would probably be its most close-to-the-knuckle moment, but the world of ‘Don’t Hug Me I’m Scared’ – and directors Becky Sloan and Joseph Pelling do an astounding job of creating an entire universe around their characters in what probably only amounts, if you watch the entire six episodes back to back, to about 35 minutes – has even darker places to which it’s ready to usher the audience. The schizoid computer in episode four whisks the gang into a digital interior with a cheerful malevolence that makes HAL9000 seem well-adjusted; the big musical set-piece plays out like ‘Tron’ got into a dance-off with ‘Evilspeak’ and things turned nasty. Episode five has Red Guy missing, possibly kidnapped, and Yellow Guy and Duck Guy slowly realising that something is very wrong – a piece of snail-like deduction that is hampered by a raw steak, a refrigerator and a can of peas coming to life and hectoring them about healthy eating. Turns out the threesome have their own dietary requirements and the inevitable lurch into outright horror might leave you feeling like you’d prefer to skip your next couple of meals.

At eight minutes, and featuring a substantial live-action sequence, the final episode is almost devoid of laughs. It starts with Yellow Guy, alone, crying himself to sleep because he misses Red Guy and Duck Guy. His bedside lamp sings to him about dreams, but proves about as reassuring in this respect as Freddie Krueger on a gallon of espresso and a half a hundredweight of crack cocaine. Symbolism, musical cues and characters from previous episodes intruder, the universe of ‘Don’t Hug Me I’m Scared’ seeming to collapse in on itself. The whole thing concludes with a terrible sense of inevitably, yet in a manner that leaves the episode – indeed the series itself – endlessly open to debate and interpretation.

While each episode is a nightmarish masterpiece in miniature, balancing pitch-perfect satire with existential terror, taken as a whole ‘Don’t Hug Me I’m Scared’ is far more than the sum of its parts. Functioning on a higher level than the puppets-doing-vulgar-things remit of, say, ‘Meet the Feebles’ or ‘Marquis’, what Sloan and Pelling have created is clever, disconcerting and quite unique.
Posted by Neil Fulwood at 5:20 PM