WINTER OF DISCONTENT: So Sweet, So Dead

It’s a subject that’s been covered in these pages several times before: Italian exploitation movies and their multiplicity of alternative titles. But in the case of Roberto Montero’s ‘So Sweet, So Dead’, it’s worth revisiting. The indigenous title is ‘Rivelazioni di un maniaco sessuale al capo della squadra mobile’, which even the non-linguist should automatically be able to intuit as definitely not translating to ‘So Sweet, So Dead’ based on nothing more than the sheer amount of words in the original title.

Known in Britain as ‘So Sweet, So Dead’ and in America as, variously, ‘Bad Girls’, ‘Penetration’ (a heavily re-edited hardcore version) and ‘The Slasher … is the Sex Maniac’, its original title translates as ‘Revelations of a Sex Maniac to the Head of the Criminal Investigation Division’. Which is not only magnificently unwieldy (it’s up there with ‘What Are These Strange Drops of Blood Doing on the Body of Jennifer’ and ‘The Corpses Presented Traces of Carnal Violence’) but a spoiler of the highest order, happily giving away what should have been an out-of-the-blue final act rug-pull where Inspector Capuana (Farley Granger), having embarked on a risky strategy to flush out the killer, receives a phone call from said nutjob and discovers that … But I’m getting ahead of myself. 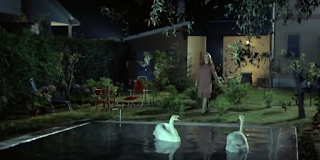 ‘So Sweet, So Dead’ opens in lurid fashion with a police photographer taking his time snapping the dead body of a naked woman whose throat has been cut (this on top of the multiple stab wounds). Snapshots of a compromising nature were left at the scene. Capuana tries to get a handle on the case: jealous husband, impotent psychotic, voyeur? Is the murder connected to the woman’s husband, a senior army officer? Forensic psychologist Professor Casali (Chris Avram) posits that the murderer is gay, though no real reason is expounded on; besides, Capuana is more concerned about Casali’s protégé Gastone (Luciano Rossi), a mortician whose interest in corpses seems a little unhealthy.

Further killings occur, always of society women, all of whom are conducting affairs. Always the slashed throat and stab wounds; always the photographs. Always the closing of ranks by the elite so that Capuana’s investigation never gains traction. His superiors demand results but are quick to upbraid him when he ruffles feathers. At home, he bitches about the job to long-suffering wife Barbara (Sylva Koscina) but refuses the easy way out of a job with her father’s manufacturing firm.

Dario Argento once famously remarked, when quizzed about the incipient misogyny of gialli, that it’s more aesthetically pleasing to watch a beautiful woman menaced by a killer than a man – an argument that’s as intellectually facile as defending the use of the word “fuck” in front of a group of five-year-olds by dint of it being marginally less offensive than saying “cunt”. Let’s consider the Argento protocol at a slightly – and I mean nanometrically – deeper level: it’s okay to be misogynistic about your choice of victim because women are nicer to look at. So much face; so much palm.

If ever there was a film that bowed, curtsied, fellated and generally loved Argento’s dictum long-time (even more so, I hasten to add, than ‘Strip Nude for Your Killer’ or ‘The Sister of Ursula’) then that film is ‘So Sweet, So Dead’. It doesn’t just want its share of eye candy – the female cast extends beyond the frankly gorgeous Koscina to include Femi Benussi, Annabelle Incontrera, Krista Nell and Susan Scott – but paints them as shameless adulteresses and engineers their death scenes to incorporate as much gratuitous nudity as possible.

Not only is the lack of a proactive heroine frustrating – the film flirts with lawyer’s daughter Bettina (Angela Covello) as witness to the killing and therefore potential amateur sleuth or next victim, only to completely abandon either narrative possibility – but to stuff a movie this full of genre icons and not give Benussi or Scott or Koscina or Incontrera a single fucking interesting thing to do is just criminal.

So, with the ladies of the cast devalued, the film’s giallo credentials rest on two things: the efficacy of Capuana’s investigation and the film’s effectiveness as a mystery. The former can’t be overstated: gialli are rife with fucking useless coppers. Any giallo drinking game would perforce include: number in the title, colour in the title, eyeball searing interior decoration, architecture porn, amateur sleuth, all-important clue that said amateur sleuth just can’t quite put their finger on, bottle of J&B, killer who favours black gloves and fedora, useless fucking copper. Capuana isn’t necessarily a useless copper, just an unengaging one. Farley, either a scenery-chewer par excellence or a somnambulist of the highest order, is on sleep-walk mode here. (Granted, I’d rather have a subdued Farley performance than one in which he mistakes the interior design for a mixed grill.)

As a mystery, ‘So Sweet, So Dead’ sucks donkey balls. In fact it sucks the balls of those depraved enough to suck donkey balls. I’d even go so far as to say it sucks donkey balls while reading The Daily Mail and listening to Justin Bieber. As a mystery, it’s fucking pathetic and hinges on Capuana’s final reel recollection of something that surely to God he’d have reflected was significant waaaay earlier in the movie; something, moreover, that hasn’t even been referenced by the lazy-assed script. The resolution of ‘So Sweet, So Dead’ hinges on a shoehorned-in series of flashbacks utterly uncontextualised by anything that has gone before. It’s like reading Conan Doyle’s ‘The Final Problem’ and only having one reference to Moriarty in a footnote appended to the last sentence. It’s not a twist, it’s a toss off.
Posted by Neil Fulwood at 9:11 PM