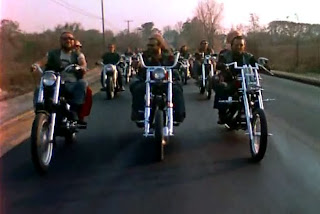 In the last month or so, my trawl through exploitation cinema has taken in blaxploitation, Nazisploitation, sexploitation, hicksploitation, gialli, rape/revenge, home invasion, cannibalism, women in prison and Japanese cheapies of the dude-that’s-fucked-up variety. The delightful wrongness of ‘The Candy Snatchers’ has offset the grubby ennui of ‘The House on Straw Hill’. The hymn to the female form that is Laura Gemser and Ely Galleani taking a shower together is something I focus my mind on with the utmost degree of concentration when the mention of the words “black” and “Emanuelle” in the same sentence threatens to conjure up, unbidden, the sight of a woman polishing some equine lighthouse. So to speak.

Now I find myself halfway through December, with a just a week and a half till the grand finale, when the winner of the caption competition (you’ve still got time to enter; just click the pic on the sidebar) gets to pick, from a shortlist of six, the final title in this year’s Winter of Discontent. I say “this year’s” because the list of titles I drew up, based on their availability online or borrowed from friends, was enough to for at least two more Winters of Discontent as well as a little something I’ve got planned for early next year. More on that later.

So there I was trying to whittle down all the possible bits of filth, depravity, violence, sexual licentiousness and profanity the master list presented me with, when I realised that I hadn’t featured any bikersploitation or nunsploitation. Consider that oversight rectified. We’ll be getting into some bad habits (sorry!) tomorrow, but tonight’s film features a bunch of boozing, brawling, bristly-bearded bad-ass bikers. 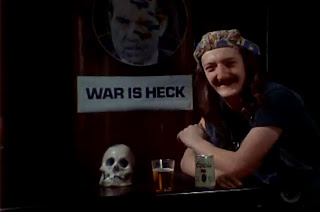 The opening scene has an elderly couple, stranded on the side of the road after a puncture, cowering in their car as a motorcycle gang terrorize them. Then kindly change their tyre and roar off. While not entirely unexpected in its execution, it’s a reasonably cute scene, playfully subverting audience expectations. For the next twenty minutes, sod all happens. Nah, actually things do happen – stoner Chris (David Hyry) hitches a ride with the bikers on the condition that he’ll break out his stash; some white trash cops hassle them; Chris hooks up with his girlfriend Lynn (Jan Sisk); and everyone whoops it up at a biker wedding – but co-writers/co-directors William Dear and Thomas L. Dyke string everything together so arbitrarily, concentrating more on endless scenes of Harley Davidsons roaring up and down country roads than on characterisation (the biker gang was apparently played by an actual biker gang and I got the impression that Dear and Dyke were kind of hesitant to give them much in the way of direction or foist anything as complicated as a script on them). Dialogue is a minimal and a horrible C&W ballad tells the story instead.

At around the one-third mark, there’s an attempt at a story. Chris and Lynn, left behind after a make-out session in a barn when the police move the bikers on, are set on by corrupt cop Puttnam (Craig Collicott), who knocks Chris unconscious and rapes Lynn. He then bullies her into silence and leads her father to believe that the biker gang were responsible. Lynn’s influential father gives Puttnam his by-your-leave to deal with the bikers unofficially. 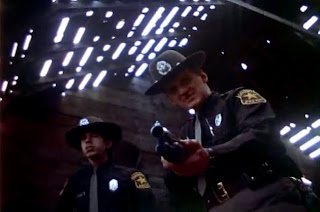 ‘Northville Cemetery Massacre’ is a grindhouse good ole boy flick, with the bikers sanctified as an essentially peace-loving bunch who just want to ride their hogs, chug some JD, throw darts at a pictures of Richard Nixon and smoke a little weed. So what if they hang up a swastika in their clubhouse? In what seems like a feature-length exposition of the last scene of ‘Easy Rider’ – the freedom-loving bikers arbitrarily gunned down (except with the bikers here at least returning a few shots) – ‘Northville Cemetery Massacre’ wears its anti-authoritarian heart on its sleeve. And that’s fine by me. Only it doesn’t quite work. The freewheeling first third – which I’d be tempted to call experimental in its approach if I wasn’t convinced that it’s actually the product of simple ineptitude – gives way to an entirely predictable narrative which nonetheless wants to freight its no-one-here-gets-out-alive final sequence with an almost Shakespearean hint of tragedy (will Lynn tell her father the real story in time to prevent bloodshed?)
Essentially, ‘Northville Cemetery Massacre’ fancies itself as an avante garde message movie which balances exploitation with pathos and plays out to a C&W soundtrack designed to appeal to the backwoods shit-kicker market. Unfortunately, it fails on just about every level.
Posted by Neil Fulwood at 10:58 PM

I thought this one was OK, but definitely not one of my favorite biker movies. You should check out the 1977 movie STONE from Australia. Did you know that Nick Nolte provided the voice of the lead male character? I'm not sure why they dubbed him over with another person, but yeah... Nick Nolte.

Unbelievable! And there I was watching 'Northville Cemetery Massacre' and thinking that guy sounds a hell of a lot like a younger Nick Nolte, shame he doesn't have the same charisma.

I'll make a point of tracking down 'Stone'.