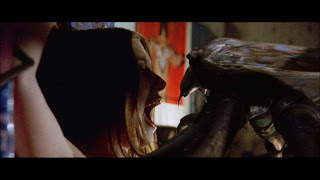 Ellory Elkayem’s 15-minute short film ‘Larger Than Life’, made in 1997, is a knowing and good-natured homage to the “creature features” of the 1950s. He followed it up with ‘They Nest’, a TV movie about a coastal community besieged by killer bugs. You could say a pattern was emerging, and with the backing of ‘Independence Day’ heavy-hitters Dean Devlin and Roland Emmerich, Elkayem’s love of all things creepy and crawly found its fullest expression in ‘Eight Legged Freaks’.

The script, by Elkayem and Jesse Alexander (who went on to be a regular contributor to ‘Heroes’), is a gem of economical exposition and multiplicity of characters. The setting is the economically depressed town of Prosperity – a place as ironically named as Perfection in ‘Tremors’ – whose denizens include foxy-as-fuck sheriff Samantha Parker (Kari Wuhrer), her equally eye-candylicious teenage daughter Ashley (Scarlett Johansson), returning prodigal son Chris McCormick (David Arquette), conspiracy theorist and pirate radio DJ Harlan Griffith (Doug E. Doug), corrupt local entrepreneur Wade (Leon Rippy), his stepson (and Ashley’s jock boyfriend) Bret (MattCzuchry) and a whole of others. Enough, in fact, to fill a mall ... which is where the townsfolk gather in for their climactic stand-off against a hoard of giant spiders, an extended set-piece that’s gloriously demented and often laugh-out-loud funny. 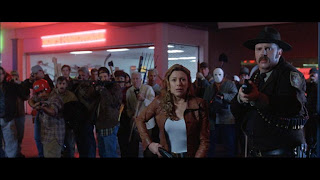 The mall setting deliberately evokes Romero’s ‘Dawn of the Dead’, and Elkayem uses it as a fictive and genre-heavy space stocked as heavily with in-jokes as the stores are with unsold goods. Any film that can effortlessly and within the same sequence homage ‘Friday the 13th’, ‘The Texas Chainsaw Massacre’ and – in a bizarre but inspired moment – ‘Field of Dreams’ without ever battering the audience over their heads with its own cleverness gets my vote.
It’s the aforementioned ‘Tremors’, though, that provides the essential touchstone for ‘Eight Legged Freaks’. The small town setting, the acute awareness of the tropes of ’50s B-movies (and how to integrate them into a contemporary setting), the nifty balance between gross out and funny (the fate of the deputy’s cat is a standout; likewise the disappearing ostriches), the eccentrics who populate the town, the besieged survivors gathered in one place, the hair’s-breadth escapes – ‘Eight Legged Freaks’ follows the template of ‘Tremors’ but avoids the trap of slavish imitation. It generates its own folksy charm, largely by dint of a well-chosen cast and Elkayem’s ability to seed the humour organically (many post-‘Scream’ horror comedies take the route of self-conscious irony and the humour suffers as a result). 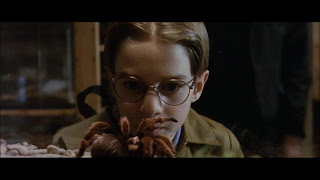 Well-paced and attractively shot (a tip of the hat to cinematographer John S. Bartley), it’s strange that ‘Eight Legged Freaks’ didn’t set Elkayem up for bigger and better things. His next films – shot back-to-back – were the four and fifth entries in the ‘Return of the Living Dead’ franchise (subtitled ‘Necropolis’ and ‘Rave to the Grave’ respectively). These were followed last year, after a four year hiatus, by redundant sequel ‘Without a Paddle: Nature’s Calling’. Which leaves ‘Eight Legged Freaks’ as the one stand-out – a terrifically enjoyable film where everything clicks – in a filmography otherwise defined by mediocrity. What went wrong?
Posted by Neil Fulwood at 6:14 PM

Yeah, I like this film, too. And you're right about it being indebted to TREMORS as would another subsequent horror film that mixed yucks with jolts - SLITHER.

I actually prefer this film to ARACHNOPHOBIA which didn't go quite far enough like this film did. Plus, Kari Wuhrer is much easier on the eyes than John Goodman!

Good call on Kari Wuhrer. I know exactly where you're coming from!