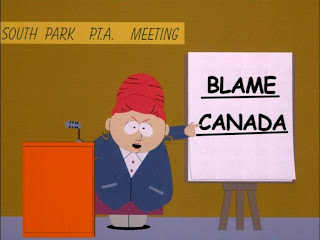 Dating its first incarnation back to ‘The Tracey Ullman Show’ in 1987, it took ‘The Simpsons’ twenty years to make the transition from TV to the big screen, and then with variable results: ‘The Simpsons Movie’ is entertaining, but doesn’t quite achieve the inspired brilliance of the series at its formidable best.

‘South Park’, on the other hand, debuted in 1997 with the feature-length spin-off ‘South Park: Bigger, Longer and Uncut’ effing and blinding its way into cinemas just two years later. It’s sharp, cohesive and exploits the possibilities of its extended running time in a way ‘The Simpsons Movie’ failed to, building on everything that was so scabrously entertaining about its small screen self and taking it just that bit further. It’s also got some kick-ass songs. 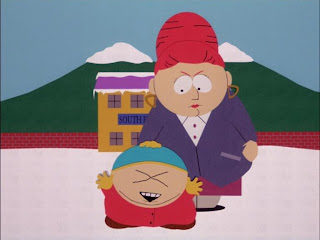 Oh yeah, ‘South Park: Bigger, Longer and Uncut’ is a musical. But not like any other animated musical you’ve ever seen. From the affable cynicism of ‘Quiet Little Mountain Town’ (“see our breath hanging in the air / see homeless people but we just don’t care”) to the gently improving sentiment of ‘M’kay’ (“you don’t have to end up addicted to smack / homeless on the street giving hand-jobs for crack”) to the parade of profanity in ‘Uncle Fucker’ (“shut your fucking face, uncle fucker / you’re a bona fide bastard, uncle fucker”) by way of the call to arms ‘Blame Canada’ (“we must blame them and cause a fuss / before someone thinks of blaming us”) and the defining anthem that is ‘Kyle’s Mom’s a Bitch’ (“well, Kyle’s mom’s a bitch, she’s a great big bitch / she’s the biggest bitch in the whole wide world / she’s a stupid bitch if there ever was a bitch / she’s a bitch to all the boys and girls”), every number emerges as the kind of triumphantly potty-mouthed sing-a-long that would have Walt Disney spinning in his grave.

The plot is bonkers: Kyle’s mom starts a groundswell of moral outrage after she catches her son repeating filth heard a Canadian-produced movie which develops into all out war with Canada; meanwhile Kenny gets killed (natch!) and ends up in hell where Satan is awaiting his chance to rule earth while his lover Saddam Hussein keeps the Prince of Darkness firmly under his thumb. Saddam murmuring to Satan, “You like that don’t you, bitch?” after they get under the sheets and turn the lights out is just one of many moments in the film’s 78-minutes that could be deified and installed in the Temple of Wrong. 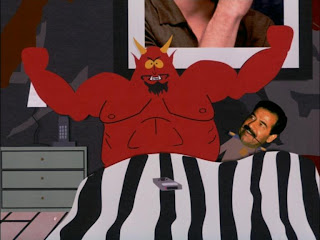 I've never been in a theater filled with people who laughed so hard and so often for a film. I had to go see it again just so I could make out dialogue in certain scenes that had been drowned out by laughter!

The film is very funny and really goes after so many sacred cows as you so rightly point out. And as a Canadian, I'm always amused by the good-hearted jabs at us Canucks.

Maybe it was to do with English reserve, maybe it was the fact that I was about the only guy in the audience that night not with a wife or girlfriend, but when I saw the film on the big screen, that "anything that bleeds for five days and doesn't die" was met with stoney silence and I felt guilty (for all of a millisecond) for laughing.

The thing that makes Parker and Stone such unstoppable satirists is their gifts as mimics.

As you pointed out the score here is as rousing as any from Disney (Sondheim apparently declared it the best film musical score in decades. Not alot of competition at the time but still). And God help me based on Team America if Parker and Stone ever wanted to make an unironic Bruckheimer movie, I would watch it.

Oh and JD now that you've pointed out your Canuckness I can't leave this thread without asking if "You would mind telling me what this is all 'about'."

I forget where the whole "aboot" thing comes from maybe a bit of the English thing leftover? Not sure. But that and "eh" is the most famous Canuck-speak.

In the thicker Scottish brogue, "about" sometimes gets pronounced "aboot". I've never heard anyone south of Hadrian's Wall pronounce it that way.

To be honest, the Canadian minister's accent sounds more Sooth Ifricken than anything else!

Speaking of theater experiences, I also saw this movie in a theater, and I was shocked to see how many parents brought their kids to see it. I'm not even kidding! It's obvious that they didn't know what SOUTH PARK was all about and probably thought "oh hey, a new cartoon, maybe we should see that". Still, though, the R-rating should have been an indicator, don't you think?

Needless to say, the parents slowly filed out of there with their children. The few that did try to stick it out left when the Uncle Fucker song kicked in. Even though I was only about 17 or 18 at the time and part of me thought it was funny, I was still very embarrassed for those parents, but even more so proud of Matt Stone and Trey Parker!

But yeah, the R rating should have been an indicator ...