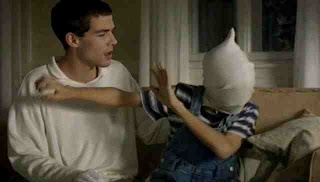 I’ve always been mildly suspicious of Michael Haneke. It’s that veneer of cerebral, slightly aloof arthouse filmmaking – cinematography that communicates a cold, clinical approach; arbitrary shots lingered on long enough to provoke inertia (but not long enough that they become hypnotically mesmeric as in, say, the work of Andrei Tarkovsky or Bela Tarr); the soundtrack dotted with the more austere choices from the Schubert lieder – juxtaposed with content that is often exploitative. There’s something about Isabelle Huppert sniffing a semen-encrusted tissue in a porn booth in ‘The Piano Teacher’ or the non-naturalistic reverse deus ex machina at the end of ‘Funny Games’ that makes me think of Haneke not as an auteur or a provocateur but as a seven-year-old saying “fuck” in a school playground because it’s guaranteed to shock the grown-ups. An intelligent seven-year-old, granted, and from a good family; a seven-year-old who can recite a Shakespearean sonnet from memory and is doing well with his piano lessons. But nonetheless a seven-year-old who’s just gleefully said “fuck” because he knows it’ll get a reaction.

‘Funny Games’ is patterned after that grimmest of sub-genres, the home invasion movie. An upper-middle class family head for their summer house for a weekend of yachting and doing whatever else that people with that kind of money get up to, only for their sojourn to be interrupted by two well-spoken and ineffably polite young men, both dressed in tennis whites, who take them hostage in their own home and subject them to a series of increasingly unpleasant humiliations. The husband’s leg is broken with one of his own golf clubs. The family dog is offed. The son’s life is threatened, a bag over his head. The wife is forced to disrobe.

All of which is pretty standard ‘House on the Edge of the Park’/‘Last House on the Left’ fare. Except whereas those films – and a goodly number of other 70s and 80s low-budget, “video nasty” stylee productions would follow up this last with a protracted rape scene, then document the turning of the tables by the victims against their aggressors, Haneke takes a different route. For starters, he gives the youths no motive: they take none of the family’s material possessions, no ransom is demanded, they seem to bear no grudge, there’s no sexual violence and, given that they seem as well-spoken and well-bred as their victims, there isn’t even a class divide to account for their antagonism. Nor do they seem to take any pleasure in what they do. Nor does the onscreen action (such as there is: much of the film is dialogue) deliver sex, violence, blood or gore. The worst moments – including two of the deaths – occur offscreen.

In essence Haneke takes the template of a grubby and nasty little home invasion movie, strips it of all the guilty pleasures fans of that subgenre would expect and throws it back at the audience’s face to ask its own question: why are you watching this?

Which is fair enough. Only Haneke makes two aesthetic decisions – one (and it happens on several occasions) is to break the fourth wall; the other constitutes a major spoiler but you’ll know it when you see it and, if your reaction is the same as mine, you’ll want to kick the TV out the window – that I find unfathomable. They puncture the claustrophobia of the film; they leech it of tension; they allow the audience to shrug and say “yeah, whatever”, to sidestep the thorny questions of audience complicity and let themselves off the hook. The poster for ‘Last House on the Left’ famously read “to avoid fainting, keeping repeating it’s only a movie”. Haneke never lets us forget that it’s only a movie; and try as I might to rationalise the mindset behind this, I can’t see it as anything other than an artistic own goal.
Posted by Neil Fulwood at 9:00 PM

Haneke is not a director whose films I rush out to see, but I do think he's one of the best film-makers working today. But, at the same time, I totally understand the points you bring up about Haneke's tendency to rub everyone's nose in the shit, seemingly just to get a reaction out of people, but I admire that quality about him.

FUNNY GAMES is, like you said, a film that takes the home invasion movie and turns it on its ear. It makes a mockery of it while simultaneously being an outstanding example of it.

The lingering, arbitrary shots that you mention in the beginning of the review work to great effect in CACHE, which is probably my favorite movie of his that I've seen so far and a movie I'd love to hear your thoughts on. I've always wanted to do a write-up on the parallels of CACHE and LOST HIGHWAY, but man, my head hurts just even thinking about it. :)

Thanks for the comments.

I didn't like 'Cache' much when I first watched it. I got too hung up on certain elements that seemed non-naturalistic: the Depardieu character is a well-respected TV presenter, yet he never uses the resources of the TV studio to get the tapes analysed; the police seem disinterested in his concerns when you know full well that a man in his position would (a) be fawned over by the authorities and (b) have the money to hire a private detective if need be; he's shown to be a coward when he has the encounter with the Algerian guy on the bike, almost shaking after they exchange words, yet he goes alone to the house he's managed to identify from the video. Also, the way him and his wife react to their son going missing - I didn't find it realistic that they'd just sit at home rather than driving around, retracing his steps, trying to find him. All these things annoyed me. I also missed the crucial detail in that extended final shot outside the school first time round.

Then a friend of mine persuaded me to watch it again, suggested I think of the Depardieu character as a metaphor for nationalism and cultural indifference (the scene towards the end where he takes a sleeping pill and draws the curtains against the outside world takes on a lot more meaning in this context), and hinted on what to look out for in the final shot.

'Cache' is hard work, but ultimately I've found it a more rewarding and multi-layered work than 'Funny Games'. I can see exactly what Haneke's doing with 'Funny Games' - and your comment that he turns the genre on its head is bang on - but I just can't get round the way he breaks the fourth wall (it works brilliantly in some movies, but it just seems to work against this one) or the infamous rewind scene. Yes, it takes away from the audience that moment of catharsis that would allow them a moral reason for watching a quasi-exploitation movie, but it does so at the cost of such blatant artifice that you can let yourself off the hook by going "meh, just a movie".

But maybe that's Haneke's genius. That he gets under your skin and gets you debating his films, whether you like them or not.

I agree that the breaking of the fourth wall and the "rewind scene", in a way, completely fuck with the momentum of the movie. But, again, that's HANEKE fucking with the audience, which is one of the reasons that I like him so much.

As far as CACHE, I never thought of Depardeiu's character as a metaphor for anything, but I will keep it in mind if I ever do watch the movie again. It should make for an interesting, re-watch. I overlooked a lot of the things you had gripes with, mainly because I was too fixated with the story voyeurism aspect, which I found very interesting (and creepy). I love CACHE mostly for the ridiculous amount of tension that Haneke is able to build in it. The elevator scene was a great example, and, of course, those shots that linger for way too long. Those shots and the silence that accompanied them, I found to very unsettling. David Lynch, to me, has always been the master of incorporating silence into his films and using them to build tension, but in CACHE, Haneke masters that technique, IMO.

I'm no Hanneke fan either. He doesn't make movies he makes Skinner boxes.

One of my favorite points that A.O. Scott ever made is that the only way the audience could "win" Funny Games to Haneke's satisfaction is if they where so incensed by what they saw that they broke into the projector room and destroyed the print before it was half way finished.

Most people do not realize how simple it is to go online and find funny games that will make it easier than to give their day a pleasant and humorous twist!

Click bgames play free online games now. They say the best things in life aren’t free, but when it comes to the best free games, it’s just not true – even your Steam library may be graced by the occasional free AAA game. Whereas Xbox and Playstation have created an ecosystem for handing out free games with Games with Gold and playStation Plus, respectively, PC games unfortunately don’t fall under the same sort of platform umbrella.

Still, the best free games are plentiful and wide-spread across Steam GOG and even (brace yourself) Origin, thanks to the occasional freebie and the runaway popularity of free-to-play games. From Massively Multiplayer Online Role-Playing Games, like Wildstar, to strategic collectible card games, like Hearthstone, the best free games cover a wide span of different styles and genres. Plus, since we’ve invested plenty of time (maybe even too much) into these games, you can – in good faith – trust our judgement.