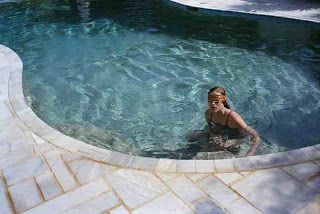 ‘Dogtooth’ – a film whose title becomes horribly apparent as it progresses – begins with a woman teaching her three children some new words. The first indication that something is just a little bit wrong is the kids’ ages: they’re all in their mid to late teens. The second is the definitions of the words she’s teaching them. “Sea” apparently has nothing to do with the ocean; it’s a type of chair. “Telephone” is a salt shaker. And if, like me, you thought “zombie” was a shuffling undead creature, well we were both wrong. It’s a “small yellow flower”.
Later, as the kids soak up the sun outside, a plane passes overhead. Their mother throws a small toy plane from an upstairs window. The kids race to find it, there being some kind of competition attached to the retrieval of what they earnestly believe are objects that fall from the sky.
By this point, even the hardiest aficionado of such cinematic surrealists as David Lynch, Alejandro Jodorowsky or Luis Buñuel would have to admit that there’s definitely something not quite right with this particular family.
It soon becomes apparent that they’re not allowed outside the property. A fictional prodigal sibling who suffers on the other side of the wall is presented as a cautionary tale. When it suits their control-freak entrepreneur father, he “kills off” their sibling, blaming the death on a cat. It gives him a good excuse to train them to hold the perimeter on all fours, barking like dogs. 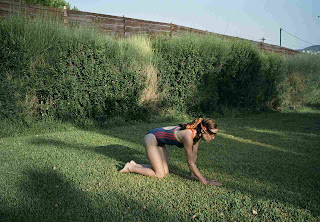 What this blandly manipulative individual can’t control, however, is the onset of hormones, and he resorts to paying one of his female staff to take care of his son’s sexual needs. He takes all possible precautions, including driving the woman to and from the residence blindfolded. Nonetheless, she brings external influences into the family’s otherwise hermetically sealed environment. The businessman dispenses with her services and decides – SPOILER ALERT (and, uh, SOCIALLY DEVIANT BEHAVIOUR ALERT, as well) – to offer his son the choice of his two sisters.

Oh, did I mention that ‘Dogtooth’ is a comedy?

A comedy, granted, in the way that Herzog’s ‘Stroszek’ is a comedy. Or Lynch’s ‘Eraserhead’. Perception, “normality” and accepted norms – not just social and/or moral, but the norms of how we expect a movie to function – are skewered to the point of absurdism. Whether one laughs, howls or runs screaming from the cinema is entirely a matter of personal response.

What makes ‘Dogtooth’ so simultaneously funny and horrifying is that writer/director Yorgos Lanthimos never gives us a why. The film is a metaphor, no doubt about it – but for what?

Again, it’s a matter of personal response. It works as an exposition on Phillip Larkin’s observation that “they fuck you up, your mum and dad”; certainly, it presents an effective warning on how parental overprotectiveness can distort and damage the worldview of their offspring. Or you could take it beyond that and consider it a response to Josef Fritzl case – the film becomes far more disturbing with this reading in mind. Or there’s the wider metaphorical implication: the film as a treatise on how governments cultivate a climate of fear and misinformation the better to control the citizenry.

‘Dogtooth’ is one of the most enigmatic things I’ve seen recently. The performances are amazing, the cinematography off-kilter, and the entire aesthetic a testament that Yorgos Lanthimos is indisputably a truly original talent.
Posted by Neil Fulwood at 4:03 PM

HOly smokes man, I need to see this one right away. By the description of the scenes you mentioned, it sounds like they are talking about politics. The whole thing with making the think things are one way, and not seeing how things are "on the other side of the fence"....

Sounds like a movie I would devour. Sounds like this film plays out like a Harmony Korine film, ever seen anything by Korine? Highly recommend Gummo man, it will be like nothing you have ever seen.

Good call, Franco. I didn't make the connection while I was watching it but 'Dogtooth' has the feel of a slightly less abrasive Korine film. I've seen a few of his works, but I've not seen 'Gummo' yet. I'll rectify that as soon as possible.

I highly recommend 'Dogtooth'. It was awkward to write about as I didn't want to give away too many of the specifics, or put a particular reading or meaning on it. It's an incredibly enigmatic film and it allows the viewer to bring something of themselves to it.

Look forward to comparing notes once you've seen it!

Gummo is an experience, its freaky, disturbing and shocking. It feels so real, its the kind of film that mixes documentary style filmmaking, and real environments to tell its story. Its like taking a shower with an ice cold bucket of water, hope you enjoy it. Expect a review for Dogtooth soon!

'Gummo' has been added to the rental list. Review to follow as soon as I've seen it.