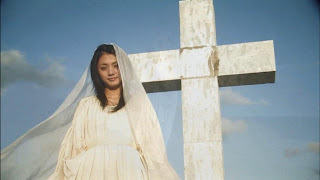 Ever watched a movie that’s kept you waiting fifteen or twenty minutes for the opening title credit? To the point where you figure they may as well not have bothered.

True, ‘Love Exposure’ clocks in at an evening-consuming four hours (though I’ll wager it’s one of the zippiest four hour movies you’ll ever see; ‘La Belle Noiseuse’ moved nowhere near this fast), but it does give the impression of that first hour being something of an introduction. A curtain-raiser before the main business of the film gets underway.

This is both a stroke of legerdemain and mildly frustrating, since that first hour delivers a smorgasbord of inventive satire, lowbrow humour, inspired set-pieces and demented iconography. Although things get deeper, edgier and even more irreverent as the remaining 180 minutes unfold, it’s this first section that remains the most entertaining.

It details the travails of goody-two-shoes Yu (Takahiro Nishijima), beginning with the death of his devout Christian mother. As a coping mechanism, his father devotes his life to the church and is eventually ordained a priest. Even priests can be tempted though, and he falls prey to the flighty, demanding and provocatively dressed Keiko (Yuko Genkaku). Yu distrusts her and is right to. She eventually leaves him for a younger man. Yu’s father employs a different coping mechanism this time: he projects onto his son, bullying him into endlessly making confession. 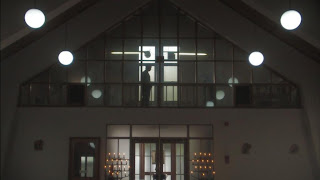 One problem: the well-mannered and resolutely virginal Yu has no sins to confess. To appease his father, however, he pleads guilty to stepping on ants, not kicking some kids’ ball back to them when asked and refusing to help a little old lady across the road. All lies, incidentally. Out of frustration and the desire to communicate with his old man even through the weird medium of a confessional, Yu decides to sin. He gets involved with a street gang, commits minor acts of vandalism, does a bit of shoplifting and gets in fights. He discovers his truly calling, however, by stalking girls in mini-skirts and snapping them with his digital camera. Specifically, employing an aesthetic approach which might best be termed “upskirt shots”.

The scenes where he trains in the surreptitious art of the, ahem, upskirt shot – and, later, takes to the streets like a whirling dervish, pouncing, darting, back-flipping and sliding as his camera clicks away and his portfolio of panty pictures proliferates – are way way way funnier than they have any right to be. In fact, scenes of a teenage lad attaching a camera to a bungee so that he can whip it under the micro-skirt of a sailor-suited oriental nymphet and photograph her strawberry-patterned underwear with neither her knowledge or permission ought by any reasonable standards to fall somewhere between creepily objectionable and desperately sad.

But snap my man-muff with an instamatic if Sion doesn’t turn this stretch of the film into one of the funniest extended sequences I’ve seen in quite some time. 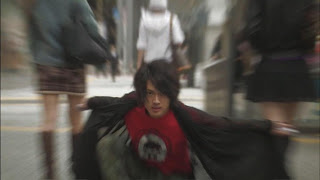 Yu quickly styles himself “king of the perverts” and gets quite the following. He happily goes to confession and gets slapped around the head by his dear old pa. Yu’s delighted; they haven’t been this close for ages. He redoubles his efforts. But one unavoidable fact begins to wear him down: for all the panties he takes snaps of, he never gets turned on. Then one day, dressed in a wig and a women’s trouser suit (long story) he meets the coquettish Yoko (Hikari Mitsushima) and it’s love at first boner. Yup: a single glance of her in her sailor suit, about to kick seven kinds of shit out of a bunch of guys in a street brawl (even longer story) and Yu experiences the first raging woody of his misspent life.

Unfortunately with the fight over, and Yu too mortified to remove his disguise (he acts the part of a woman, calling himself “Miss Scorpion”), Yoko skips away head over heels in love with Miss Scorpion and decides that she’s a lesbian. Oh, Yoko’s also the stepdaughter of Keiko and she’s at war with every man on the planet on account how her dad used to … well, yeah, you can probably guess the rest of that one.

The brawl, it turns out, was both orchestrated and observed by the manipulative (but no less comely in a short skirt) Aya (Sakura Ando), a dangerously seductive type who recruits followers for a religious cult called The Zero Church. And Aya has just decided that a fallen priest “redeemed” by their “faith” will be just the thing to boost their profile and attract more recruits.

‘Love Exposure’ is, first and foremost, a treatise on the arbitrary nature of sin and the dangers of religious cults. It’s also about sexual confusion, the awkwardness of first love, tranvestitism, friendship, the peculiar dynamics of the family unit, voyeurism, deceit, rivalry, pornography (one particular plot twist has Yu working for an adult film production company called Bukkake-Sha) and rebellion against establishments, be they religious, quasi-religious, social, educational or institutional. 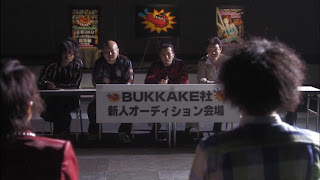 There are a few lapses into melodrama, particularly in the final hour, and digital cinematography often has the flat, unlovely look of a home movie. But none of that detracts from the fact that ‘Love Exposure’ is a unique, often exhilarating and unexpectedly poignant piece of work, directed with supreme confidence and boasting full throttle performances from its mainly young cast. The soundtrack is great, alternating between infectious J-pop and classical. Yu’s duck-to-a-water induction into the art of the upskirt is scored to the best use of Ravel’s ‘Bolero’ since Torville and Dean laced up the ice skates, while the slow movement of Beethoven’s 7th provides a heartfelt accompaniment to the deeper moments.

‘Love Exposure’ comes on like an hallucinatory hybrid of ‘Holy Smoke’, ‘One Flew Over the Cuckoo’s Nest’, ‘Cyrano’ and a bizarre Japanese version of ‘Fight Club’ (except with panty-peeping instead of bare-knuckle smack-downs) as if co-directed by Alejandro Jodorowsky and the guy who made ‘Vampire Girl vs Frankenstein Girl’ while out of their skulls on a fat line of coke cut with icing sugar and ground up communion wafers.

And if that doesn’t give you some idea of the film, ponder on this: I wrote that last paragraph stone cold sober but high as dragon-shaped kite, riding the pure buzz of a film that reminded me why I fell in love with movies in the first place.
Posted by Neil Fulwood at 10:35 PM

it was hard to shake the feeling this movie was made for me and me alone...to restoke my passion for filmgoing. i'm glad it has had a similar effect on so many others.

Same here: the jolt it gave me reminded me what the medium can be capable of.