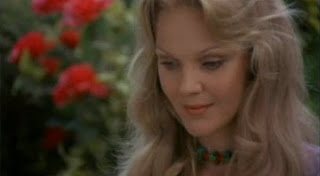 Remember that scene in Edgar Wright’s ‘Hot Fuzz’ where Nicholas (Simon Pegg) and Danny (Nick Frost) are discussing a woman of a certain standing in the community, and they touch upon her predilection for the mature male? The dialogue goes something like this:

DANNY: She was in my year at school. Always had a thing for her.
NICHOLAS: She clearly has a thing for older men.
DANNY: Hey, now you come to mention it, I too have reason to believe she favours the older gent.
NICHOLAS: Really? How so?
DANNY: Marcus Carter’s big brother said he’d fingered her up the duck pond.

Linguistic nuances notwithstanding, this scene sprang to mind twenty minutes into Radley Metzger’s ‘The Image’ when Anne (Rebecca Brooke) is taken to a place of horticultural interest and, not to put to fine a point on it, gets fingered up the rose garden.

(To those readers who still frequent these pages in the hope that one day I will again write intelligent reviews of classy films using non-colloquial language: please bear with me. To my mother, in the unlikely event that she ever buys a computer and gets internet access: sorry, ma!)

The point is, once I heard Nick Frost’s voice exclaiming “He fingered her up the rose garden”, I became increasingly unable to take the remaining hour or so of ‘The Image’ (a.k.a. ‘The Mistress and the Slave’, a.k.a. ‘The Punishment of Anne’) seriously. Which made it hopelessly funny, since Metzger’s approach to the material is so desperately, desperately serious.

Based on a novel by Catherine Robbe-Grillet (writer, sometime actress and wife of ‘Last Year in Marienbad’ director Alain Robbe-Grillet), ‘The Image’ is narrated by Jean (Carl Parker), a writer – although if his novels are as ponderous as his voiceover, he probably makes Marcel Proust look like Raymond Chandler – who attends a soiree at which blandly pretentious people flit about saying blandly pretentious things and is quite bored by the whole thing until he bumps into an old flame, Claire (Marilyn Roberts). Claire is in the company of a stunningly attractive but curiously reserved young woman, Anne.

Jean quickly discovers that Claire and Anne’s relationship is defined by a dynamic of power and subjugation, the sexual element of which is characterized by – … oh, fuck it. Let’s not prettify things. Anne is Claire’s slave. Claire gets off on dominating, humiliating and controlling Anne. Correctly intuiting that Jean would quite like the opportunity to do the same, Claire essentially pimps out her bee-yatch (in a manner of speaking) to the furtherment of Jean’s carnal desires. 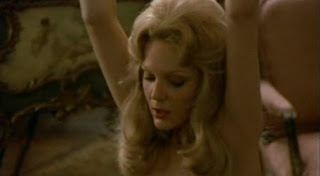 The novelistic origins of the material are explicit in the ten chapter titles which intersperse the loosely delineated narrative arc. The first chapter is called “An Evening at the X...’s”, the banality of the phrase counterpointed by the suggestiveness of the “X” and its accompanying ellipsis. The title of the final chapter – “Everything Resolves Itself” – could almost suggest a light romantic comedy, the lovers glibly paired off, the obstacles removed and the audience applauding as the good-natured laughter subsides.

But, as I said earlier, the odd juxtaposition of pornography and arty stylizations is at least semi-successful. For the most part, the film has an elegant look to it (this slips a little in the fellatio scenes, but if there’s a way of making a penis look even remotely elegant on screen, then I sure as hell don’t know about it). The main set-pieces are driven by character dynamics and Metzger certainly goes some way towards exploring the nature of dominance and submission and how these interlinked polarities (if that isn’t a contradiction in terms!) are incorporated into a relationship. It’s a bloody sight more successful than Just Jaekin’s ‘The Story of O’ in this regard.

And then there’s Rebecca Brooke. A beguiling and enigmatic actress with a background in theatre, she’s about as far removed as possible from what you’d imagine an actress in an adult movie to conform to. Given little dialogue, for the most part naked and used for Claire and Jean’s pleasure, her characterization of Anne is imbued with a fragile yet resilient humanity. Like Christina Lindberg in ‘Thriller – A Cruel Picture’, she single-handedly bootstraps an essentially cynical (albeit well-made) piece of exploitation and redefines it, purely by the strength of her performance, as something iconic.
Posted by Neil Fulwood at 11:10 PM