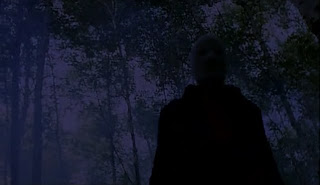 Although not as well-represented in gialli as black gloves, wickedly glinting knives, spiral staircases or bottles of J&B, the image of a broken or ritually dismembered doll is one of the most provocative images the genre has given us.

So. Nudity, voyeurism (as well as a hint of blackmail, perhaps?) and fetishized imagery. All within the first two and half minutes. Señor Martino has your attention, yes? Just to make sure he retains it, the first murder comes less than ten minutes in, after our second bout of nudity as a couple make out in a Mini parked beneath an overpass. I suspect camera trickery was used, since the kind of languorous make-out session these two engage in is spatially impossible in a 1970s Mini unless you have both doors open and shove the gear lever in reverse.
Ahem. Moving swiftly on. They’re disturbed by a masked figure and the young gentleman makes the terminal mistake of giving chase. The young lady makes the equally inadvisable mistake of getting out of the car. The killer strikes. Once she’s dead, he really gets to work. 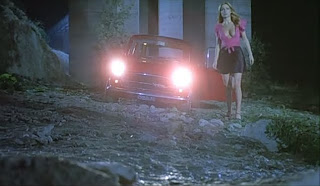 A note on the title. ‘Torso’ is pretty meaningless, notwithstanding the killer’s hacksaw technique in the latter stages of the proceedings. The original title is much more apposite: ‘I corpi presentano tracce di violenza carnale’. Which you don’t have to be a linguist to figure out means ‘the bodies showed signs of carnal violence’. And why? Because, as the killer puts it – and I’m giving nothing away here whatsoever – “they were all dolls, just stupid dolls made of flesh and blood”.
The overpass victim – Florence (Patrizia Adiutori) – was a classmate of Jane (Suzy Kendall) and Daniela (Tina Aumont), both of whom are studying art in Rome. Florence’s murder coincides with Daniela’s stalking by the spurned by persistent Stefano (Roberto Bisacco) and their friend Carol (Christina Airoldi) acting out of character. Then there’s a second murder. But fear not – Inspector Martino (Luciano De Ambrosis) is on the case and he’s tenaciously following up a lead.
Uh, actually, this being a giallo and coppers in gialli being as effectual as a bulletproof vest made out of rice paper, scratch that. Be afraid. Be very afraid. Daniela is. She’s seen something she thinks might be important and she’s initially convinced that it implicates Stefano. Jane uncovers evidence that she believes is to the contrary. Nonetheless, Daniela gets a whispered message warning her against talking to the police. Her nerves shredded, Daniela’s uncle (whose attentions towards her seem more voyeuristic than avuncular) suggests she repair to his villa in the country to rest and recuperate. A business trip prevents him from accompanying her, so Daniela invites Jane, along with Ursula (Carla Brait) and Katia (Angela Covello), who have their own motivations for sequestering themselves away in the back waters. 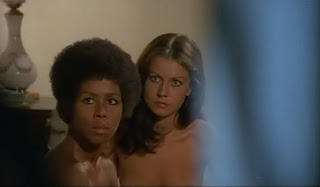 This turns out to be the biggest mistake since Florence decided to get out of the Mini and go looking for her boyfriend, rather than locking all the doors, firing up the ignition and getting the fuck out of Dodge.
The second half of the film follows the girls to the villa, where the rural idyll turns very sour very quickly. The local yokels take an unhealthy interest in them. Stalker-boy Stefano shows up. Jane sustains an injury that puts her at a disadvantage when the killer comes calling. The last half hour is a sustained cat-and-mouse sequence which sees Martino at his tension-ratcheting best.
And it’s because he handles the suspense and the shocks so well that ‘Torso’ emerges a damn fine giallo rather than the cheap sex ‘n’ violence exploitationer it was obviously conceived as. Sure, it oozes sleaze: the nudity is as copious as the slayings and Martino takes pains to render two of the victims in a state of undress at point of death, plus it deserves a special award for the most gratuitous J&B placement in the history of gialli … 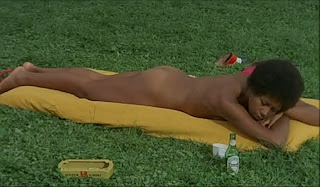 … (just in case Ms Brait’s elegant form is too distracting, it’s the ashtray), but ‘Torso’ is worlds removed from the clumsy wank-fodder of ‘Strip Nude for Your Killer’ or the grim misogyny of ‘The New York Ripper’. It’s effectively paced, makes good use of the kind of subjective prowling camerawork normally associated with Argento, and it’s slew of red-herrings and misdirections keep you guessing right up to the buttock-clenching finale.
This was the fifth of five consecutive gialli Martino made between 1971 and 1973, following ‘The Strange Vice of Mrs Wardh’, ‘The Case of the Scorpion’s Tail’, ‘All the Colours of the Dark’ and ‘Your Vice is a Locked Room and Only I Have the Key’. And that’s a hell of a good run by anyone’s standards.
Posted by Neil Fulwood at 10:47 AM

My favorite sequence of Torso is when Conchita Airoldi takes a detour to a drug den, then to emerge in that wonderfully hazy ash and mud sequence.

Martino has always had a sumptuous visual style and he captures sensuality very well. I cannot think of another female ensemble cast, all with such beautiful eyes. I suppose it is quite appropriate, as you point out, Neil.

When I initially wrote about this film, I saw Torso as a part-giallo/part-slasher film. I think midway through the film, right before the ladies move to the villa, it's fairly obvious who's a suspect and who's not. Wisely, the mystery dissolves. Ernesto Gastaldi and Martino deserve kudos for a fairly innovative and bold script.

I'm enjoying Giallo Sundays and all of your work, Neil. Have a good week.

Yeah, that really is a great scene. Martino nails the hazy, druggy atmosphere and when Airoldi stumbles outside and into the marsh land, there's a really discordant and off-kilter feel to it.

That move-to-the-country development definitely fractures the narrative, and the way Martino moves the film seamlessly into different territory, from a fairly standard giallo to a sustained exercise in cat-and-mouse tension is brilliantly done.

This is one of my favorite giallo (and surely having one of the prettiest female casts doesn't hurt in remembering the film).

TORSO is definitely one of those films where I can see some having trouble getting past the more exploitive aspects and failing to see the artistry that Martino surely possesses.

The suspenseful "final girl" sequence is extremely suspenseful and effective, something that Hitchcock would have been proud of. Speaking of which -- is Martino the first to use this "final girl" concept that would become standard issue in every slasher movie of the 80's-now? Suzy Kendall surely fits all the traits of such a character...

Thanks for the comment, Troy. For me, that brilliantly sustained last half hour is what lifts it above the pulpy and exploitative elements on display - arguably more so than in any other Martino giallo - elsewhere in the film.